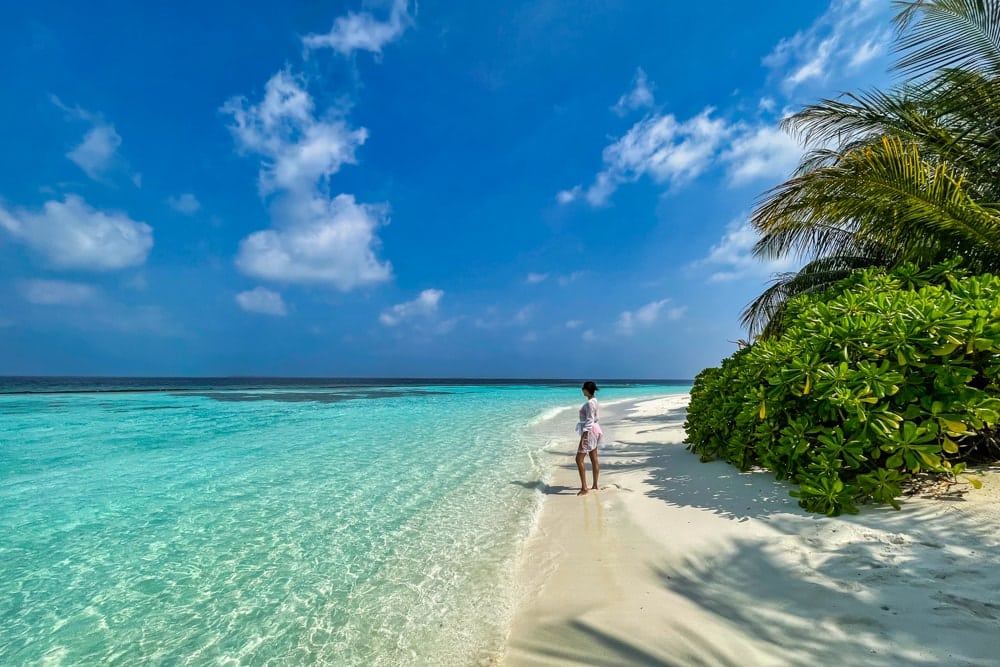 This was back in 2012 and while Peter and I had been to Italy, Iceland and Cambodia together, there was nowhere quite so idyllic. With sky-high expectations, we flew out to Malé, the capital of the Maldives, and caught a private speedboat to the island of Baros.

The trip was predictably perfect. We dined on a private sandbank, sailed with dolphins, guzzled champagne on a dhoni vessel and sampled a nine-course menu. In short, we couldn’t believe our luck.

What we didn’t know then is that Baros Maldives would set an impossibly high watermark against which to compare our future trips. Over the ensuing decade, we travelled to around 50 countries together including stunning beach destinations like St Kitts & Nevis, Bora Bora, Fiji, Mauritius and the Cook Islands. While some of these places came close, none rivalled Baros.

Peter and I spoke of returning but always theoretically. We rearranged days and activities to hypothetically create the perfect week: dinner on the beach instead of the Lighthouse, diving instead of snorkelling, maybe a second massage. Given the cost involved, never did we think that we’d actually do it.

After two years of lockdowns, however, we wanted some way to begin to relive. For years, I had been on a treadmill, publishing my novels Take It Back, then Truth Be Told, then Next of Kin and writing Those People Next Door. I hadn’t rewarded myself for this work. What’s more, I was turning 40 – and so we decided: let’s spend the money and return to Baros Maldives.

We decided to go back to Baros

Straight away, we were advised against it. Our neighbours told us that you couldn’t recreate the perfect trip; that it was better as a perfect memory, but I knew I’d regret never returning and decided to take the risk.

Peter and I booked a week at Baros and made the 12-hour flight from London. On arriving, we were escorted to our beautiful Beach Villa six hours before the official check-in. It was like getting an extra day for free and we were thoroughly delighted.

Alas, our delight was not to last. When I walked out to our shaded veranda, my heart sank. The first time we stayed at Baros, our room faced a section of the beach which, apart from a couple or two on an evening stroll, was largely our own. This time, we faced a jetty occupied by a stranger parading in his Speedos. On the parasol, he’d hung his boxers which swayed in the wind. He planted himself in the middle of my view, rubbed his beer belly and proceeded to scratch his bum.

I gave him my best death stare but he cheerily said hello, then plucked his Speedos from an unseen crevice and plopped onto a lounger. This was not the romantic private paradise that I had expected.

I, being the Brit that I am, enquired if perhaps, maybe, possibly, would-they-be-so-kind as to move us to a different room. We were told that the only other available Beach Villa was right next to the bar. With live music five nights out of seven, it wouldn’t be quiet or calm.

I asked if perhaps they would put us in a different category of room (codespeak for please upgrade us), but was promptly told that this would cost extra. This was a bit of a rude awakening. I had assumed that given the astronomical cost involved, they would find some way to resolve the issue. This trip was the culmination of four years of hard work but the view was anything but luxury. I realised that maybe our neighbours had been right after all.

I pressed the issue but was once again declined. After my third polite attempt, I’m afraid to say I went full-on Karen. I asked to speak to the manager but was told he wasn’t available. Peter tried to appease me but I was intent on changing rooms. For better or worse, I got a glimpse into why rich people are so often entitled. Back in our room, I emailed the manager with a picture of our unwanted guest scratching his buttocks again.

Within an hour, we were upgraded to a Water Villa. It saddens me to say this but, sometimes, you just have to be an arsehole.

We were upgraded to a Water Villa

From there, things improved immediately. While there were small bugbears that didn’t exist 10 years ago – high rises on the horizon, concrete defences to bolster the beach – there were also significant improvements. The food, for example, was utterly exquisite. Plus we were in a Water Villa with direct access to the Indian Ocean. This was the experience we had hoped to repeat.

In another risk, we chose to repeat the sandbank dinner, a luxury experience in which we sailed to a tiny sandbank and were wined and dined by a private chef. Our first experience back in 2012 was entirely faultless. This time, we had a weaker sunset and higher winds. The latter meant that instead of soft yellow flame, we dined in harsh artificial light. Trivial, yes, but that’s the very danger of repeating a perfect trip. Any minor shortfall has the potential to mar your week.

Battling the winds, I rifled in my bag for a hairband or even a facemask with which to tie my hair. Eventually, I tamed it with a pen. After champagne and canapes, we settled in to eat. The chef, Dinusha, whipped up an absolute feast. As we made our way through the first course, we were joined by dozens of crabs who skittered around the edge of the light. While Peter found this charming, I was unsettled by it. Despite this, we had a thoroughly magical evening. I had worried that the experience wouldn’t live up to the memory – especially as this time we were paying for it – but it absolutely did.

The rest of the week was a dreamy haze of swimming, snorkelling, drinking and eating. So – in hindsight, was it worth it or were our neighbours right?

Despite the hiccups at the start, despite the high winds, the crabs and the minor differences, I have to say that yes, it was. This was a place I had dreamed about for more than 10 years. If I had never revisited, I know I would have regretted it.

There’s something to be said for living with a perfect memory; of taking it out once in a while to admire it in the light and then putting it away for safekeeping. Trying to recreate it can go horribly wrong – as it nearly did for us – but in the end it was worth the risk. Now, we get to reminisce with two perfect memories.