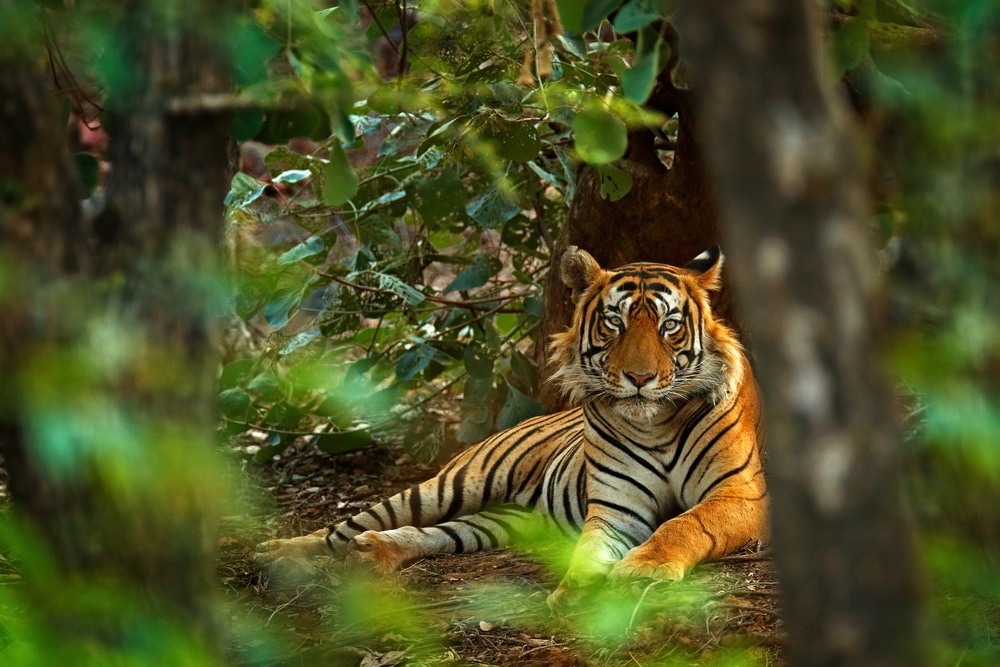 In July 2000, the UN’s World Conservation Monitoring Centre recognised 17 megadiverse countries which hold the majority of Earth’s species and high numbers of endemic species (i.e. those unique to an area or country).

To be termed megadiverse, a country must have at least 5,000 of the world’s plants as endemics and have marine ecosystems within its borders. The focus on endemic species is important because it demonstrates how a small group of countries holds a large portion of the world’s biodiversity and therefore has a significant moral responsibility in terms of conservation.

Megadiverse countries: how they stack up

Below are the world’s 17 megadiverse countries as they currently stand. Without a significant change in human behaviour, there may well be fewer in the not-too-distant future.

Home to 60% of the Amazon rainforest, Brazil is the most biodiverse country in the world. It’s estimated that the South-American behemoth is home to between 15-20% of the world’s biological diversity – an ever-expanding figure with an average of 700 new animal species discovered each year.

Brazil is the most biodiverse country in the world

Sadly, there are myriad threats to Brazil’s biodiversity including fragmentation and loss of habitat, overexploitation of plants and animals, the introduction of alien species and exotic illnesses, pollution and climate change. Habitat loss is the most significant factor driving species to threatened status.

The archipelago of Indonesia comprises about 17,000 islands, only 990 of which are permanently inhabited. Its most famous endemic creature is the Komodo dragon, which can be found in a handful of islands in Indonesia’s Lesser Sunda archipelago. The Komodo dragon is the largest living species of lizard and, in some cases, can grow to three metres and 70kg.

Another fascinating fact is that female Komodo dragons can reproduce asexually. As they have both male and female sex chromosomes, they can reproduce in a process called parthenogenesis when lacking a mate. There is one drawback though: the process only results in male progeny.

The terrain of South Africa ranges from desert to grassland to subtropical swamp and is a rich breeding ground for a diversity of flora and fauna.

The country is home to the ‘Big Five’ game animals (lion, leopard, rhinoceros, elephant and Cape buffalo) and encompasses 80% of the world’s rhino population. Tragically, these beautiful creatures are heavily exploited by poachers; between 2013 and 2017, more than 1,000 rhinos a year were killed in South Africa.

This number is declining (the 2019 figure stands at 594), but still constitutes to one rhino being killed every 15 hours.

Of the world’s megadiverse countries, Colombia ranks first in the biodiversity of bird and orchid species and second in plants, butterflies, freshwater fish and amphibians.

Colombia is one of the world’s richest countries in aquatic resources, due in part to its large watersheds feeding into the four massive sub-continental basins of the Amazon, Orinoco, Caribbean, Magdalena-Cauca and the Pacific.

As with the other countries on the list, Colombia’s natural ecosystems have been transformed by agriculture. Soberingly, an estimated 95% of the country’s dry forests have been reduced from their original cover.

Given Australia’s distance from anywhere, its biodiversity developed largely in isolation over millions of years. Add in unique environmental conditions (nutrient-poor soils, natural climatic variability, high fire frequencies and a generally flat topography) and you are left with an extraordinary wealth of flora and fauna.

The country is home to the kangaroo, koala, wombat and dingo – some of the world’s most famous endemic species. It also has more reptile species than any other country: 869 at last count with 93% unique to the continent.

Given its extra responsibility with regard to the Great Barrier Reef, Australia is one of the most important countries in the world in terms of biodiversity.

Papua New Guinea comprises the eastern half of the island of New Guinea and numerous outlying islands to the north and east. The forests on the island constitute the world’s third-largest tropical rainforest after the Amazon and Congo Basin.

Sadly, according to a 2011 study by the Ministry of Environment and Natural Resources, over a quarter (28.7%) of Mexican territory has lost its natural ecosystems.

The country has taken a number of steps to address this including the Mexican Strategy for Plant Conservation (2012-2030) and smaller-scale monitoring programmes for specific species such as the Morelet’s crocodile and the felines of Manantlán.

The third-largest country in the world (after Russia and Canada), China is rich in forest, wetland and grassland.

Sadly, since 1970, the country’s terrestrial vertebrates have declined by half, caused in part by habitat loss and nature degradation by human activities and development. Given its burgeoning status on the world stage, China will play a vital role in the future of environmental conservation.

The archipelago of the Philippines includes over 7,000 islands extending more than 1,850 kilometres from north to south. The country’s location close to the equator and on the Pacific Ring of Fire makes it vulnerable to earthquakes and typhoons but also provides abundant natural resources, resulting in rich biodiversity.

Among the country’s weird and wonderful creatures is the Philippine tarsier, a shy and nocturnal primate that leads a largely hidden life. It becomes active at night when its keen sight and ability to manoeuvre around trees allows it to avoid contact with humans.

The ecosystems of Madagascar include forest, savannah, steppe, wetland and dryland. Its coastal areas are among the richest and most diverse in the Indian Ocean region and include coral reefs, mangroves, phanerogam seagrass beds, estuaries and coastal marshes.

The country’s most famous mammal is the lemur, a primate found only on Madagascar and some tiny neighbouring islands. What’s interesting is that before humans arrived on the island around 2,000 years ago, it was home to lemurs as large as male gorillas.

Today, their habitat is threatened by agriculture, mining and overexploitation of natural resources.

India benefits from a wide range of ecosystems and habitats including forest, grassland, wetland, desert, and coastal and marine ecosystems.

The country is home to rare endangered species such as the Asiatic ibex, Tibetan argali, wild yak and snow leopard, and is a stronghold of three cat predators: the lion, leopard and tiger.

Conservation of its biodiversity is crucial for India as it provides goods and services necessary for human survival and is directly linked with improving socio-economic conditions for millions of local people.

Since independence, Malaysia has benefited from rapid economic development, partly thanks to its rich natural resources.

There is no doubt that the country will continue to harness its natural resources for economic gain, but it’s heartening to know that based on 2012 statistics, approximately 60% of the country’s total land area is still forested, including permanent reserved forest, state land forests, national parks and wildlife and bird sanctuaries.

This is consistent with Malaysia’s commitment to protect at least 50% of forest and tree cover in perpetuity, as pledged at the 1992 Rio Earth Summit.

Malaysia is also implementing the Heart of Borneo Initiative which aims to conserve 20,000 square kilometres of forest on Borneo, home to Bornean orangutans and Rafflesia arnoldii, the largest flower in the world.

Venezuela’s diverse wildlife includes manatees, Amazon river dolphins and Orinoco crocodiles, which have been reported to reach up to 6.6 metres in length.

A range of factors – habitat destruction, pollution, the introduction of exotic species and overexploitation – are threatening Venezuelan biodiversity.

The country’s National Strategy for the Conservation of Biological Diversity (2010-2020) was put in place to confront the loss of biodiversity, the results of which are yet to be reported.

Fishing is particularly important to the economy of the country. In terms of volume, Peru is one of the world’s main fishing nations.

As a result, however, some of its species are being overexploited (the Peruvian hake is now in a regulated fishery). Moreover, reshaping coastal land for aquaculture has caused irreversible damage, particularly to mangroves.

The better news is that eco-initiatives are gaining popularity and there has been a 25% increase in surface dedicated to organic or ecological production.

Ecuador is classified as a megadiverse country thanks to its location in the neotropics, the presence of the Andes and the influence of the ocean’s currents on its coasts.

The country is divided into four geographical zones: coast, mountains, the Amazon and the Galápagos Islands, which of course helped inform Darwin’s theory of evolution.

Endemic species include the giant tortoise, three iguana species, the Galápagos penguin, Galápagos sea lions, waved albatross and the flightless cormorant. Given the islands’ significance in natural history, Ecuador bears a special responsibility with regard to conservation.

The USA extends from Alaska in the Arctic to the Hawaiian archipelago and several island territories in the Pacific and Caribbean, earning it an extraordinary level of biodiversity.

The USA has 62 national parks, the first of which was Yellowstone in the state of Wyoming. Established in 1872, Yellowstone is widely considered the finest megafauna wildlife habitat in the country and is home to 67 species of mammals including the gray wolf, the threatened lynx and the grizzly bear.

Democratic Republic of the Congo

The DRC has a high rate of endemism and important forest, soil and freshwater resources. The Congo Basin which runs through the country is home to several species of endangered wildlife including forest elephants, chimpanzees, bonobos and lowland and mountain gorillas.

The future of these species is uncertain as pressure on local ecosystems continues to grow. The causes are myriad and include deforestation, poaching, exploitation of water resources, pollution, introduction of invasive alien species and mismanagement of conservation areas.

The biodiversity in the DRC is at particular risk as there is currently no emergency plan or national rapid alert system for species threatened with local extinction.

The sixth extinction is likely to be mankind’s most lasting legacy and Elizabeth Kolbert’s book urgently compels us to rethink the fundamental question of what it means to be human.