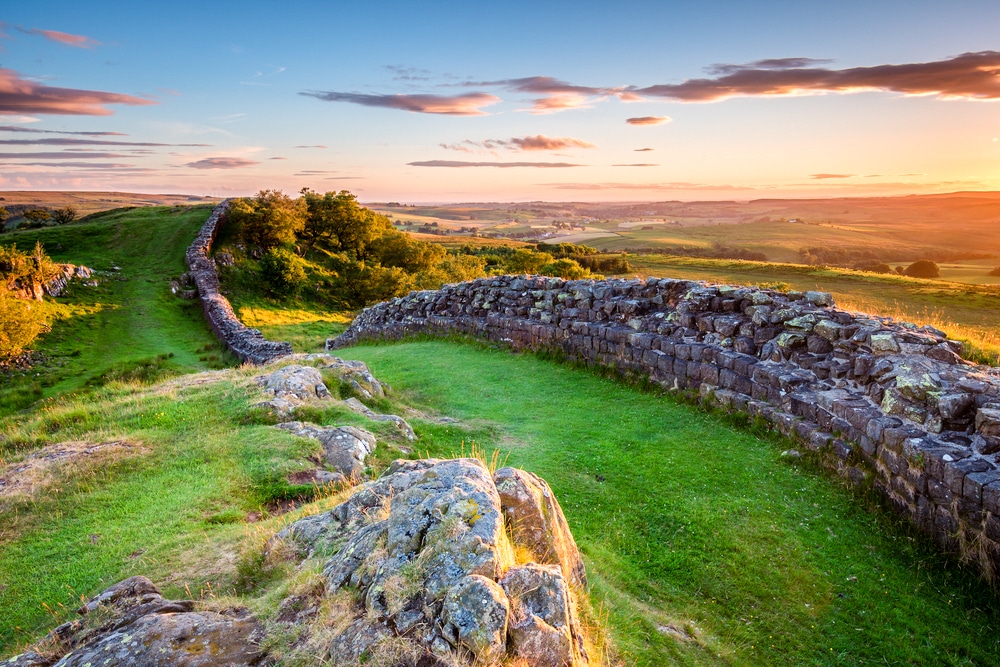 Covering an area of 1,049km2, this rugged, isolated landscape is best known for the UNESCO World Heritage Site of Hadrian’s Wall that slices across England’s countryside from coast to coast.

But there is more to Northumberland than ancient milecastles and crumbling forts. This timeless landscape is home to the rolling Cheviot Hills straddling the Anglo-Scottish border; the UK’s most photographed tree; and Kelder Forest, England’s largest manmade woodland.

As far as wildlife goes, roe deer, wild goats, red squirrels, moorland gamebirds and the rare black grouse can all be seen inside the park.

What’s more, in 2013, it was designated a Dark Sky Park which means it is protected from artificial light pollution to promote astronomy in the region. In fact, it is the largest area of protected night sky in Europe making it one of the UK’s best places to stargaze.

Over 1,100km of trails make the park one of England’s choice walking destinations. Here, we share the best hikes in Northumberland National Park – 12 unique ways to explore England’s remote north.

For more information on things to do and where to stay in Northumberland National Park, visit the national park website.

In the well of a striking dip along the Hadrian’s Wall Path sits the 2016 England tree of the year (yes, there is a tree of the year). You may recognise it from the 1991 film Robin Hood: Prince of Thieves as the sycamore tree that the boy Wulf climbs to evade Guy of Gisborne and his men.

This pleasant walk is the perfect introduction to Northumberland National Park and its most famous landmark, Hadrian’s Wall.

The short but sweet journey has the added bonus of starting and finishing at the Twice Brewed Inn, a pub known for its home-brewed ales and hearty Northumberland sausages.

Greenlee Lough is the largest natural lake in Northumberland and the surrounding wetlands make for an idyllic setting, particularly during spring when the cotton grass and yellow flag iris burst to life.

The footpath is also a great place for birdwatching. The shallow Greenlee is brimming with perch, which makes it easy hunting ground for osprey. The birds of prey often hang around for a couple of weeks during their annual migration southwards in late summer and early autumn.

Now we’re talking. This transborder hike takes in the deserted Otterburn Ranges. There are outstanding panoramic vistas to be found on the summit of Brownhart Law, before the trail drops and crosses into Scotland.

The pinnacle of the hike is Blackhall Hill summit which offers the best views of the neighbouring hills and valleys, onwards across the Cheviot Hills and north into Scotland.

The British military has used the range for training exercises for over 100 years. If red flags are flying, then there will be certain areas off limits. Always stick to the designated footpaths.

The highlights of this meandering circuit include two tranquil villages linked by footpaths crossing unspoiled meadows, and a quiet country road passing the ruins of Harbottle Castle. Once captured by Robert the Bruce, the 12th-century sandstone Harbottle Castle was built to overlook the River Coquet and Coquet Gorge.

The route passes the Drake Stone (also known as the Dragon Stone or Draak’s Stone), an oversized erratic boulder believed to have been used by druids.

The green ridgelines and steep-sided valleys of Upper Coquetdale and the Cheviot Hills are a wonderful step up from the above village route. This wild walk quickly leaves civilisation behind and gains some ground as the trail fords its way north towards the Scottish border.

The high point of the walk is near Saughy Hill at 465m, from where the Scottish border can be seen on the northern horizon. As above, the hike begins in the village of Alwinton where Walter Scott wrote his famous novel Rob Roy, taking inspiration from the surrounding countryside.

Crags, conifer forests, heather moorland and fairies define this hike to Simonside summit where a 360° view of the Cheviot Hills and the North Sea coastline await. En route, various ancient cairns and distinctive crags mark the multiple high points of the undulating ridge.

The Simonside Hills are also the subject of several folklore legends of ‘fairies’ and ‘little people’, the most famous of which are the Duergar. According to Brewer’s Dictionary of Phrase and Fable, the Duergar were ‘dwarfs who dwell in rocks and hills; noted for their strength, subtlety, magical powers, and skill in metallurgy.’ Keep your eyes peeled.

Waterfalls never fail to delight and Hareshaw Linn is the region’s finest. The short hike begins at Bellingham, once the site of an ironworks.

Depending on the time of year (and day), red squirrels, woodpeckers, warblers, flycatchers, badgers and bats can be seen in the woodland.

The broad College Valley is about as tranquil a place as one can imagine. The flat trail roams alongside the College Burn southwards before crossing the burn and returning northwards on the adjacent side.

The river twists and turns its way along the wide unspoilt valley with interlocking moorland hills ever-present on the horizon. The nearby native woodlands provide shelter for roe deer, hares and wild Cheviot goats, which are frequently seen on the hillside near Hethpool Mill.

Another wonderful river walk, the Elsdon Burn route is a popular option for families. Points of interest include the 12th-century church at Elsdurn which is reputed to hold the dead from the 1388 Battle of Otterburn, the relics of a motte-and-bailey castle, a medieval Pele tower (one of several built along the Scottish borders), a pub and an Impromptu Tea Room (that is actually its name).

The Greenhaugh and Thorneyburn loop trail enjoys some delightful views across the Tarset Valley. En route, there are several ‘bastles’, fortified farmhouses that were built during the 16th and 17th centuries to repel the raids along the Anglo-Scottish border.

In late spring and summer, the hay meadows of Boughthill Farm will be in full bloom with an array of wildflowers such as ox-eye daisies, orchids, buttercups, yellow rattle, ragged robin and melancholy thistle all on display.

The full 135km (84mi) Hadrian’s Wall Path follows the defensive fortifications of the Roman province of Britannia that defined the northernmost frontier of the Roman Empire. Construction began in 122 AD under the reign of the emperor Hadrian to keep the ‘Barbarians’ to the north at bay.

Today, the clearly waymarked hiking trail is one of Britain’s most popular coast-to-coast routes. The 35km section that traverses Northumberland National Park could, in theory, be covered in a single day. However, it’s far more enjoyable to spread the course across at least two days.

The trail takes in Sycamore Gap as well as a considerable chunk of the Northumberland Pennine Way.

Opened in 1965, Britain’s oldest national trail crosses some of the finest upland landscapes in England. It is by far the most famous and one of the most popular of Britain’s long-distance footpaths.

The Pennine Way begins in the Peak District and runs 431km (268mi) northwards, all the way across the Yorkshire Dales and Lake District, to the village of Kirk Yetholm, just inside the Scottish border.

The final section passes through Northumberland National Park and takes in many of the above hikes including a significant section of the Hadrian’s Wall Path. In doing so, it showcases the very best of the national park from the ancient sites in the south to the Cheviot Hills to the north and everything in between.