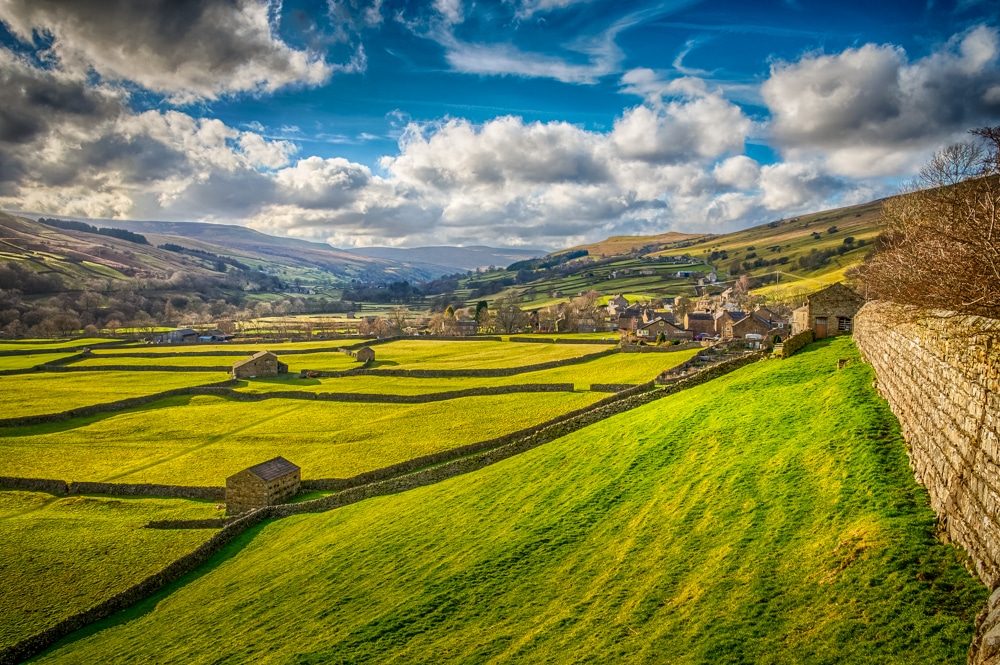 Covering 2,179km2 of countryside, the Yorkshire Dales National Park is home to one of England’s quintessential outdoor landscapes. The park’s glacial valleys are defined by a unique terrain of high heather moorland, rolling hills and dramatic waterfalls, intersected with miles of dry stone walls and delightful villages.

With miles of well-established trails, the Dales are best explored on foot. Here, we reveal the best hikes in the Yorkshire Dales National Park – 12 outstanding reasons to visit the heart of England.

We’ve selected the best hikes in the Yorkshire Dales National Park to include everything from gentle waterside ambles and calm meadow strolls to more challenging upland scrambles and multi-day treks.

For more information on things to do and where to stay in the Dales, visit the national park website.

This gentle riverside meander takes in the idyllic countryside around the villages of Grassington and Burnsall. The River Wharfe is fringed by dramatic fells, but it is the waterway’s serene smattering of pools, falls and brooks that make for one of the most tranquil hikes in the Dales.

Some of the park’s finest wild swimming spots can be found along the trail, the best of which is located above the second weir near Linton Falls.

This was the first hike I did in the Yorkshire Dales and it remains one of the most impressive. The route is a fantastic introduction to Dales topography with limestone scar, steep cliffs, rolling green hills with dry stonewalls and a glinting tarn (lake) all on offer.

The trail follows Malham Beck to beneath the 70m (230ft) limestone cliff of Malham Cove, one of the most dramatic scenes in the Dales. After a steep climb to the top of the cove, pause to soak in the views before continuing to Malham Tarn along the Pennine Way.

With a handy car park nearby, the tarn makes for a fine circular walk (5.6km/3.6mi) in its own right. On a still day, the views across its waters are affectingly serene.

The Howgills, an upland plateau about 16km (10mi) long and 8km (5mi) wide, form a natural borderland between the Yorkshire Dales and the Lake District. Characterised by steep gullies and broad high ridges, they also provide some of the most dramatic views in the Dales.

The access town of Sedbergh lies close to the M6 motorway, but the Howgills remain largely secluded. I spent two days hiking the peaks and rarely met other hikers on the trail.

The gradients can be tough in places, but the hard work only makes the views more rewarding. Do look out for the handful of wild fell ponies that roam the Howgills.

The green and pleasant moorland fells of Swaledale are probably the landscape you imagine when you think of the Yorkshire Dales. The trails around Muker, Keld and Gunnerside are nothing short of idyllic.

This route in Upper Swaledale takes in the pretty Kisdon Force waterfalls and the iconic ruins of Crackpot Hall. There are also glorious views across the winding road of Buttertubs Pass, once described by Jeremy Clarkson as ‘England’s only truly spectacular road.’

Several of the more well-known long-distance footpaths criss-cross the hillsides of Swaledale and Wensleydale including the Pennine Way and Coast-to-Coast.

When Kia and I first visited the Yorkshire Dales, it was the village of Gunnerside that won our hearts. We pulled over by the side of the road to gawp at the striking view. Five minutes down the road, we pulled over again and had our first cup of Yorkshire tea and a slice of cake. It was the first of many and we were sold!

In late spring, Muker’s famous hay meadows burst into colour adding another picturesque layer to this wonderful cross-section of the Dales spectrum. With cream teas never far away, this route can be easily combined with part or all of the above trail to Crackpot Hall.

A walk that takes in iconic Roman cairns, craggy tors and Britain’s highest pub is never going to disappoint. This breathtaking hike on the edge of Swaledale is one of the most popular in the Dales.

Aside from the pub and relentlessly striking views, the highlight of this walk is the Nine Standards Rigg. The line of cairns stands on the edge of the Hartley Fell escarpment. No one knows their purpose, but one theory suggests that the cairns were constructed by the Roman army to resemble troops from a distance.

The welcoming Tan Hill Inn is Britain’s highest public house at 528m (1,732ft) and, located roughly midway, is well worth pausing in for some light refreshment.

This is an excellent hike through the secluded small steep-sided gorge of Smardale Gill. This northwest area of the Yorkshire Dales was only welcomed into the national park with the 2016 boundary extension. The region has proven a charming, if slightly under-appreciated, addition to the park.

This route is a superb way to get to know the Dales’ newest region. The airy figure-of-eight trail takes in a striking Victorian viaduct, remote villages and hamlets, an ancient broadleaf forest and a high-level moorland bridleway with outstanding views over the gorge and river of Scandal Beck.

I’ve been on several walks around Upper Wharfedale from the village of Buckden and for good reason: the dale showcases some of the park’s finest features. Tranquil waterfalls, quaint stone bridges, picturesque valleys and panoramic upland vistas can all be found in this quiet part of the park.

This route takes in a fairly easy-going trail but does offer some exceptional views of the surrounding valleys and the higher limestone terraces in the area. The route could also be adapted to include a jaunt up the nearby summit of Buckden Pike to gain some truly panoramic views of the neighbouring fells.

Now we’re talking. This may be one of the most trodden trails in the park, but it’s for good reason. At 723m (2,372ft), Ingleborough is the second-highest peak in the Yorkshire Dales and its surrounding landscape is stippled with terraced fields, stone walls, cavernous potholes and labyrinthine limestone paving.

The attractive mountain with its distinctive outline looks good from any of its approaches and is blessed with a thoroughly enjoyable summit plateau. The only drawback is that Ingleborough is – quite appropriately – one of the most popular hikes in the Dales.

I have to confess I haven’t officially completed the Yorkshire Three Peaks Challenge yet, but I have ticked off all of the mountains individually. The three mountains – Whernside, Ingleborough and Pen-y-Ghent – make up the highest, second-highest and ninth-highest peaks in the Dales.

Whether you choose to complete the challenge in a single hike or spread it over day trips doesn’t really matter; the scenery is beguiling either way. The route boasts spectacular views of all three mountains, the ever-present Ribblehead Viaduct and, further afield, the Howgills, Lake District and even – on a clear day – Morecambe Bay on the distant horizon.

The Yorkshire Dales section runs from Kirkby Stephen to Richmond and includes many of the Swaledale trails above as well as the excellent network of paths between Reeth and Richmond. Once it leaves the park, the trail continues through Richmond, practically past our front door, and onwards to the North York Moors and the North Sea at Robin Hood’s Bay.

Britain’s oldest national trail (opened in 1965) traverses some of the finest upland landscapes in England. It is by far the most famous and one of the most popular of Britain’s footpaths. The Pennine Way begins in the Peak District and runs 431km (268mi) northwards, all the way to the Scottish Borders.

One of the most challenging parts is the Yorkshire Dales section. It is also one of the most beautiful, and showcases the very best of the national park as it traverses from the southern perimeter to the northern, taking in many of the above walks.