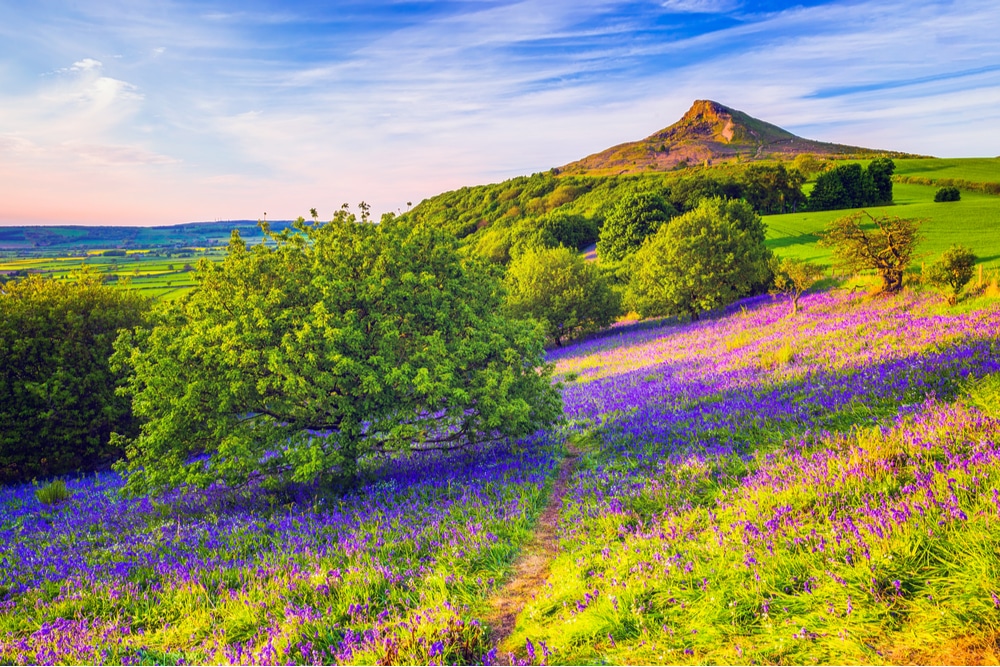 Designated a national park in 1952 and covering an area of 1,430km2 with over 2,000km of well-maintained footpaths, the North York Moors offers a wide variety of English countryside. The park is home to rare heather moorland, ancient woodland, myriad waterways and 42km of some of the most glorious coastline in England.

Here, we share the best hikes in the North York Moors National Park: 12 magnificent ways to explore an area of the UK that’s brimming with extraordinary surprises.

From gentle walks along winding rivers and peaceful meadows to more challenging treks along coastal trails or over high moorland plains, we’ve selected the best hikes in the North York Moors National Park.

For more information on accommodation and things to do in the park, visit the national park website.

This sedate stroll along the Derwent riverbank meanders through the Forge Valley Woods National Nature Reserve. The Forge Valley takes its name from the foundries set up there during the 14th century. The foundries used the local forest as a source of charcoal to smelt iron ore.

Today, the forests and its waters are protected for the numerous birds, fish and otters that frequent the area. The trail is mostly easy-going woodland paths with only occasional steeper sections.

Today, Great Ayton Moor is a peaceful spot that enjoys sweeping views out to the North Sea. However, during the Second World War, it was the unlikely site of psychological warfare on the North York Moors.

Multiple fuel tanks were installed on the moor and set ablaze when a German bomber attack began. The flames were then quickly doused to produce smoke. The end effect was to fool the attackers into the thinking the smoke was that from the city of Middlesborough. Great Ayton Moor was one of many decoy cities known as a ‘Starfish’ sites set up during the conflict.

Several historic sites remain in the area including a control bunker and anti-aircraft defences. There is also a 15m-high obelisk erected in 1827 in honour of Captain James Cook.

This classic walk can be easily extended to include the above sites on Ayton Moor. The distinctive summit of Roseberry Topping is known as the ‘Yorkshire Matterhorn’ although no ropes, ice axes or crampons are needed on this 320m (1,050ft) hill.

The circular route takes in some quintessential moorland scenes and a wonderful climb of the rocky summit, as well as the aforementioned Captain Cook’s Monument. The best time of year to complete the hike is in spring when banks of bluebells, sorrel and stitchwort burst into colour.

This is a well-trodden and popular country walk that takes in part of the Cleveland Way and never fails to delight. The highlight of the hike is the grand ruins of the 12th-century monastery of Rievaulx Abbey. This was one of the great abbeys of England until it was seized in 1538 on the orders of Henry VIII during the dissolution of the monasteries.

The ruins are spectacular from any angle and provide a tranquil sanctuary from the busy market town of Helmsley, which should be used to bookend the walk with cream teas, ale or both.

This popular route follows part of the ancient trail of Lyke Wake Walk, an unofficial 64km challenge to cross the highest and widest part of the North York Moors National Park in under 24 hours.

Don’t be put off though. This circular trail that starts and ends in Osmotherley only incorporates a tiny section of the Lyke Wake Walk. The route branches off across a footbridge into open moorland and ancient forest before joining the Cleveland Way back into Osmotherley.

Walkers can take a short diversion to visit the well-preserved monastic ruins and landscaped gardens of Mount Grace Priory.

One of Yorkshire’s most historic villages is also one of its most picturesque. Dramatic, brooding cliffs overlook Robin Hood’s Bay and its huddle of red-roofed fishing cottages spilling down to the shore of the infamous smugglers’ cove.

This circular route quickly gains height onto the hilltops around the village to gain the best views of this postcard-perfect setting. Once across the inlet via the bridge, the trail joins the Cleveland Way for the return to Robin Hood’s Bay, replete with one of the region’s most captivating sea views.

Located on the western edge of the North York Moors National Park, the route to Sutton Bank has some of the most breathtaking views in the area. The trail crosses some of the park’s most varied terrain including wizened woodland, enchanting cliffs, verdant dales and seemingly endless prairies of heather.

There is also the famous 100m-high Kilburn White Horse, a turf-cut figure cleft into the hillside. Completed in 1857, the figure was financed by a Victorian businessman who supposedly wanted to emulate the 3,000-year old Uffington White Horse in Oxfordshire.

This is another thoroughly rewarding trail. The path cuts across the uplands of the Cold Moor en route to the striking rock crags known as the Wainstones. The distinctive sandstone crags, which are popular with climbers, are the largest such group in the North York Moors.

Wide vistas of the northern moors relentlessly unfold along the trail which is also dotted with evidence of the Bronze Age people who inhabited the area over 3,000 years ago. Look out for the boundary markers and ancient graves.

This cheerful walk is popular with families thanks to its accessibility and gentle contours. The aptly named ‘Daffodil Dale’ is best walked during spring when the carpet of yellow flowers is in full bloom.

The delightful trail takes in a pretty riverside walkway along the banks of the River Dove along with footpaths through open grassland and some shaded woodland. The route can easily be extended along the river to the Daffy Caffy tearoom at High Mill, or onwards to the Feversham Arms Inn at Church Houses.

An utterly charming wander through the spacious village of Goathland takes in the waterfall at Mallyan Spout, the tumbling waters of Beck Hole, a tranquil wooded valley, some high fields and the original Whitby-to-Pickering railway line.

Mallyan Spout, the highest single fall in the North York Moors, has spent millennia forging a 20m-high chute through the limestone ravine in the woods, creating a magical scene in the process. A brief rocky scramble and some often slippery and muddy terrain must be negotiated in places along the trail.

The North York Moors section of the Coast-to-Coast is usually broken into three parts:

Each section could be completed as a point-to-point day hike or broken into smaller walks as desired. Naturally, the entire ensemble showcases a cross-section of the finest scenery in the national park.

This classic but intense multi-day national trail begins in the historic market town of Helmsley and arches across the North York Moors to the seaboard at Saltburn-by-the-Sea. The well-signposted cliff path then follows the east coast southwards, all the way to the traditional seaside resort of Filey.

En route, the trail takes in the best of the park’s famous moorland, a fine section of the Coast-to-Coast Walk, as well as the entirety of the national park’s famous 42km coastline.