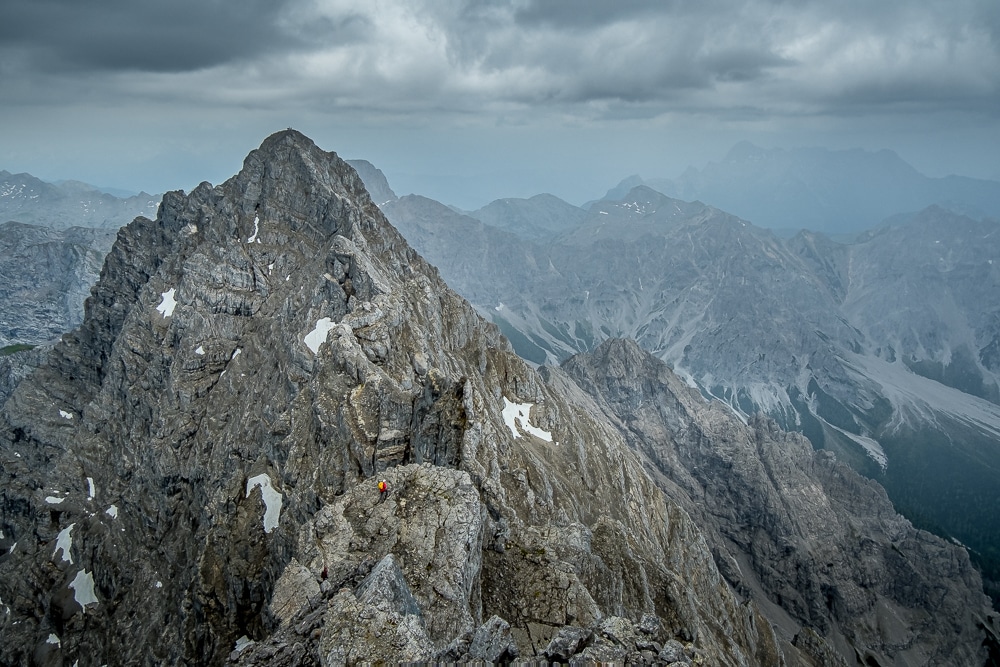 This year we swore to make more of an effort and so agreed to meet somewhere neutral for a proper holiday. That’s how I found myself on a plane to Munich in Germany for a few days of hiking in the Bavarian Alps. Our destination was the Berchtesgaden National Park in the south of Germany near the border with Austria.

We hadn’t planned our precise route, but we did know that we couldn’t visit the Berchtesgaden without completing the classic Bavarian Alpine tour of the Watzmann Traverse.

What is the Watzmann Traverse?

The Watzmann massif is the superstar of ‘Berchtesgadener Land’. Its jagged ridgeline of peaks can be seen towering above the valleys from everywhere within the park’s boundaries.

Unsurprisingly, the range’s unmistakable profile is used in various promotional material including the national park’s official logo and adorns anything from fridge magnets and snow globes to lederhosen in Bavaria’s plentiful souvenir shops.

The massif consists of a number of peaks known as the Watzmann Family. According to legend, the region was once ruled by the cruel King Waze who with his wife and children spread fear and terror throughout the land. When he trampled a peasant family with his horse, the peasant woman pleaded with God to turn Waze and his family to stone. The gods promptly answered the call and the ground opened, spewed fire and the king and his family were turned to stone.

The massif also includes the 2,307m Watzmannfrau (Watzmann Wife, otherwise known as Kleiner Watzmann or Small Watzmann) as well as the Watzmannkinder (Watzmann Children) – five lower peaks that dot the rocky belt between the main traverse and the Watzmannfrau.

The traverse of the three main peaks across an exposed ridge is popular with hikers but is considered a challenging scramble. Parts of the route are supported with miscellaneous via ferrata climbing aids.

The ‘Watzmann Tour’ is usually completed as a hut-to-hut hike in two stages, with the first day used to hike up to the Watzmannhaus hut to stay overnight. The second day is then used to complete the traverse, descend into the Wimbachgries valley and hike out to the Wimbachklamm hut and car park.

Due to lockdown restrictions that were still in place when we booked our lodging, we struggled to find huts in the park with availability to suit our dates. As such, we booked four nights at the Watzmannhaus and decided to use it as a base from which to hike the various routes in the area.

The drawback to this was that we had to complete the Watzmann Tour as a circular hike in a single day. It would mean an intense effort covering nearly 22km of trails, a sustained descent of over 2,000m after completing the traverse, a 7.5km march along the Wimbachgries Valley followed by a final punishing 1,300m ascent back up to the Watzmannhaus.

We left early in the morning and followed the snaking trail up to the first peak, Hocheck at 2,651m. The morning was overcast and cool but dry – ideal hiking weather. The climb up to Hocheck is steep but relatively easygoing compared with the ridges beyond that link Hocheck, Mittelspitze and Südspitze.

A crucifix marks the summit of Hocheck, as with all three summits. There, we took a short break before pushing on. Immediately beyond the summit, the ridge begins to descend and the first of the climbing aids comes into play. There are several steel cables and iron steps in place to aid the descent.

Before long, the ridge begins to climb again towards Mittelspitze, which is probably the most exposed section of the traverse. We took our time scrambling over the backbone of the massif, switching from one side of the ridge to the other and making full use of the aids, clipping on to the steel cables with our harnesses wherever we could.

It didn’t feel like too long before we were topping out at Mittelspitze – or Middle Peak – the highest point of the traverse at 2,713m. The views across each side were outstanding but they weren’t to last as thick cloud and a persistent fine rain quickly rolled in and engulfed the mountain.

This made the final section of the traverse extremely slow as the bare rock became disconcertingly slippery, sapping our confidence with every tentative step. Again, we descended, this time much more steeply and into a deep depression between the two peaks. Fortunately, there were enough climbing aids in place, particularly extended sections of cable which provided some much-needed security.

Finally, after what felt like an age, we began to climb again. Moving up the ridge we felt far more confident. Descending, you always feel as if your feet can slip from beneath you. By now, we couldn’t see much more than a few meters in front of us. The views had completely disappeared and so we kept close, ensuring we maintained line-of-sight with each other.

Following a final steep scramble, we topped out on the third summit of the day, the Südspitze – or South Peak – at 2,712m. Exhausted and exhilarated in equal measure, we took a well-deserved breather, signed the summit book and gazed back at what we had crossed. Unfortunately, the previous two peaks – along with the rest of Bavaria – were completely obscured by cloud.

It had taken five hours to complete the traverse and we considered returning the way we had come. However, the rock was so wet by then, we decided to stick to the plan and continue on with the loop.

Some scenes from the day on the trail

We felt the hardest part of the day was behind us, but the descent down to the Wimbachgries was extremely slow and at times felt futile. Fortunately, the weather improved dramatically and by the time we reached the valley floor, we were drenched in sunshine and sweat.

We always knew we were going to have a long day so only took a short break for a sugary cold drink at the Wimbachgrieshütte before marching along the valley to near Wimbachklamm where we crossed the Wimbach River and began a winding ascent back to the Watzmannhaus.

We finally arrived back at the Watzmannhaus seconds before an enormous hailstorm hit, with just enough time to change our clothes, order a hot meal and, crucially, enjoy a cold beer. The storm didn’t last long before we were out in arguably the best beer garden in Germany, enjoying a sensational sunset in the mountains.

We were utterly exhausted but thoroughly satisfied with what had been a thrilling day hiking the Watzmann Traverse.

Hiking the Watzmann Traverse: the essentials

What: Hiking the Watzmann Traverse in the Bavarian Alps of Berchtesgaden National Park in Germany.

Where: We stayed at the Watzmannhaus, a DAV (Deutscher Alpenverein/German Alpine Club) hut. The excellent DAV huts are fully serviced bunkhouses serving three meals a day, snacks and plenty of beer.

To stay at the hut, hikers must bring their own sleeping bags, a bed sheet and pillowcase or personal pillow. There is a dry room for wet gear, indoor and outdoor seating areas as well as several washrooms (but no showers).

Prices vary depending on the time of year and whether you stay in a double, small or large dorm room. Meals generally cost around €7 for breakfast and €10 for lunch and dinners.

This reduced the price of a bed in a dorm room from €29 to €13 per night. View the latest tariffs here.

Be aware that the Watzmannhaus only provides two litres of drinking water per day. They fill water bottles in the mornings and evenings only at specific times. If you plan to drink more than this (and you really should) I recommend taking water purification tablets or a similar system to treat the non-drinking water in the restrooms. There are limited freshwater sources on the mountain.

When: The best time for hiking the Watzmann Traverse and for general hiking in the Berchtesgaden is from June through September. It is possible to hike the lower trails outside of this period, but we do not recommend attempting the traverse.

Outside of these periods, the traverse becomes a winter ascent and requires winter climbing skills such as the use of crampons, an ice axe and additional rope skills beyond the fixed via ferrata aids.

We parked at the long-stay car park for €5 a day and hiked up to the Watzmannhaus via the Kührointhütte (5 hours in total including a break).

It is also possible to travel by bus or train from Salzburg and Munich to Berchtesgaden. More information can be found on the national park’s website.

I flew to Munich with Lufthansa. Book via Skyscanner for the best prices.