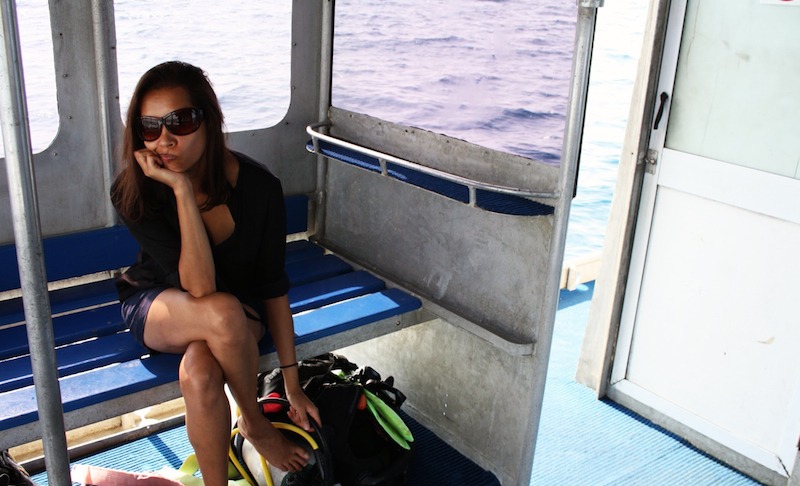 “Life’s too short for bad books,” a friend once told me. We had been swapping recommendations for a while and I was aghast that he had given up on The Kite Runner. “Keep at it,” I urged. “You’ll love it.”

He shrugged. “If I’m not enjoying a book within the first two chapters, that’s it.” He mimed throwing it away.

“I wish I could be more like you,” I had said. And I meant it. You see, I’m the type of person that will doggedly pursue a book or a task or a project that I’m not enjoying only so that I can finish it. Reading A Suitable Boy was the only thing entirely in my control that I ever gave up on – and it bugs me even today.

With this in mind, when I booked onto a 3-day intensive PADI Open Water Diver course (mere days after admitting that diving was the first travel experience I nearly backed out of), there was not a doubt in my mind that I would learn to dive and finish the course. Sure, I was nervous but I was starting it, so naturally I would finish it.

Day 1 went relatively well. Our group of five pupils met Michael, our instructor, for the first open water dive of the course. Ignoring the fact that I was putting my life in the hands of a 22 year old, I was actually quite comfortable in the water. I found it easy to breathe through the regulator and when we levelled off at about 11 metres, I felt a lot more confident than during my first ever dive.

Afterwards, Michael warned us that Day 2 would be intense because of the condensed length of the course. The morning would be spent on theory followed by practical tests in the pool and our second open water dive. The day after, we would be sitting our final exam followed by two open water dives. I shifted in my seat and asked if anyone ever failed the practicals.

Michael shook his head. “You can’t fail as such, but most people back out during the pool tests.”

That totally psyched me out. We had already lost one of the pupils in our group (after five minutes on the regulator, he said it wasn’t for him and left). I thought I’d be okay now that I was past the first dive but, actually, the hardest part was yet to come.

That night, Peter and I spent the evening ploughing through five units in the PADI course book. I paused at the various lists of practical tests. Usually, they would be spread over four or five days – I’d have one morning. The knot in my stomach tightened but even then my conviction that I would pass remained firm.

Day 2 started at 8.30am. We did two hours of theory work and learned how to assemble and disassemble all our scuba gear. Then, we began the practical tests.

First came a 200-metre swim, followed by 10 minutes of treading water. Second, we had to take out our regulators (breathing tubes) underwater and put them back in after 10 seconds. To my surprise, I did this far more easily than my very first dive when I freaked out and nearly backed out of the whole thing.

Next, we had to ‘lose’ our regulators and relocate and reinsert them underwater. After that, we had to clear a little bit of water that Michael let into our masks – a process of inhaling through the regulator and exhaling hard through the nose to push out the water. This was followed by ‘out-of-air’ tests where we had to take out our regulators, swim to another diver, ask them for their alternate regulator and insert that into our mouths, then lock arms and swim to the surface.

An hour in, I was doing surprisingly well. Later, Michael would admit that when I told him I wasn’t a strong swimmer, he didn’t think I would get that far. Next up, was swapping from our regulator to a snorkel and then back again underwater, which I managed with a bit of difficulty. After that, we had to duck underwater with a snorkel, letting it fill with water and then exhale sharply to clear it. Again, I managed with some difficulty.

And, then, came the test that stalled me. We were on our knees on the pool floor and Michael filled my mask with water, the idea being that I would breathe in through my mouth and out through my nose to force out the water. By instinct, I inhaled with both my mouth and my nose, which flooded my sinuses and made me feel like I was drowning. I shot up to the surface, ripped off the mask and took out my regulator – classic signs of a panicked diver.

Michael and Peter surfaced to calm me and encouraged me to try again. After a few minutes, I did. This time I managed to clear half the mask but, again, panicked and shot up. The third time, it happened again. The fourth time, I just about managed it but instead of continuing to swim calmly, I again shot up and took off my gear.

Michael nodded yes and then, solemnly, said, “But you have to do it again.” He saw my reaction and explained: “You need to do it until you’re confident you can do it in the open water. We’ll be testing you at depth and you won’t be able to shoot up to the surface.”

That’s when I knew I could go no further. Strangely enough, if I put my head in the water with the regulator but no mask, I found that I could breathe in through my mouth and out through my nose, but with a flooded mask I couldn’t help but try to take in as much air as possible. At depth in the ocean, there would be nothing either Michael or I could do if I experienced the same panic.

I looked around the pool. By this time, a second diver in our group had left, leaving only two others: Peter and a Frenchman named Johnny.

I turned to Michael. “I don’t think I can do this.”

Peter tried to encourage me to try it again but being on the bottom of the ocean in that kind of panic wouldn’t be fun for me, or fair on my fellow divers.

I shook my head. “I can’t do this.” And, so, with Michael’s agreement, I exited the pool and became the third person to quit the course. I watched the last two pupils complete the remaining tests and then joined them on the boat for their second dive.

Michael asked if I wanted to take the exam so that I could complete the theory, allowing me to continue the practical at some point in the future. It was a day earlier than planned but I scored 86% – far, far easier than the physical side of things.

Before I quit, I thought I’d feel crappy about doing so. I thought I’d be filled with disappointment and that I would regret it later, but as I left that pool, I felt a rush of relief and genuine happiness that I didn’t have to continue.

Today, I watched Peter and Johnny gain their certifications. Instead of feeling regret or disappointment, I felt only relief and pride.

Maybe quitting isn’t so bad after all.

1 thought on “Learning to dive, learning to quit”