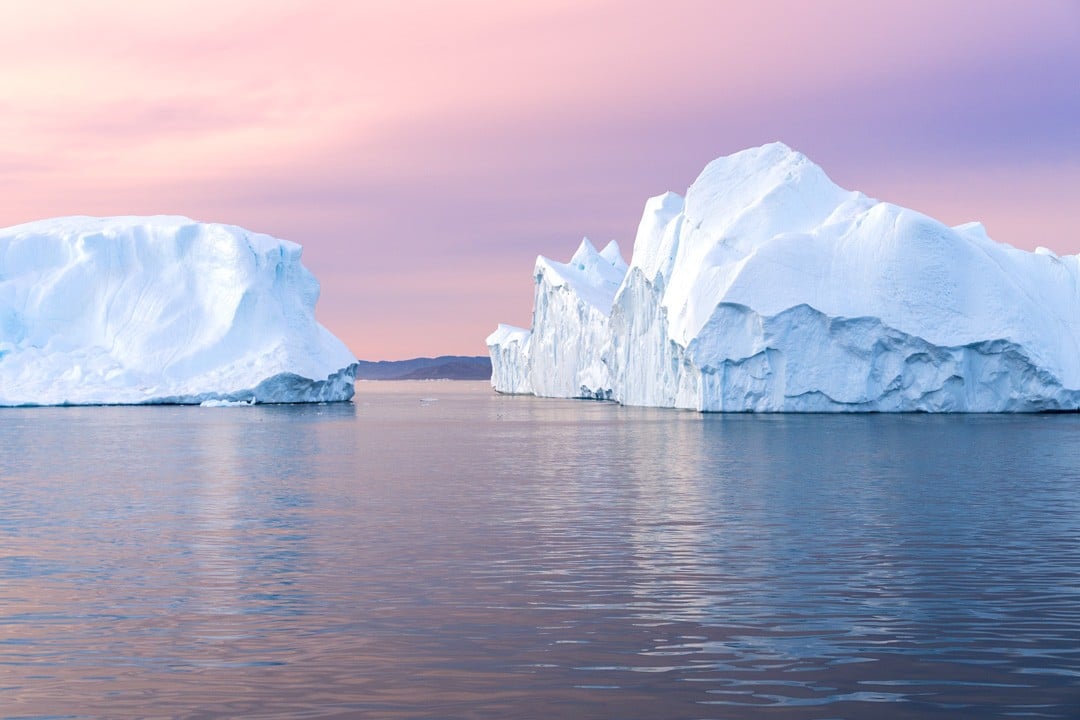 Iceberg sightseeing in Ilulissat is best done at night, not by moonlight but beneath the Arctic’s infamous midnight sun

Ilulissat is the Greenland you’ve always imagined. Positioned at the mouth of the 40km-wide Jakobshavn Glacier (Sermeq Kujalleq) itself buttressed by an immense icefjord, Ilulissat’s sprinkling of multi-coloured houses on the picturesque iceberg-strewn Disko Bay is one of the most wondrous settings on Earth.

Throw in abounding packs of sled dogs (and their cacophonous howling) and you have a destination that lives up to expectation in spectacular style. It is easy to see why Greenland’s third-largest town is its most popular tourist destination.

I’d spent my first two days in Ilulissat hiking around the UNESCO World Heritage site of the Ilulissat Icefjord, which the Jakobshavn Glacier extends from. Beyond the icefjord, inland to the east, sits the immense Greenland ice sheet (or icecap), the vast body of ice covering 1,710,000km2 of Greenland – approximately 80% of its entire land surface.

Ilulissat, a Greenlandic word for ‘icebergs’, sees a jaw-dropping 35 billion tonnes (46km3) of ice make its way through the surrounding waters every year after calving from the glacier in what is known as an ‘ice stream’. Annually, over 10% of all Greenland’s icebergs calve from Ilulissat Icefjord via Jakobshavn Glacier. This is more than any other glacier outside Antarctica.

The ice stream is one of the fastest (40m per day) and most active in the world. The combination of a huge ice sheet and fast moving glacial calving into a fjord covered by icebergs is a phenomenon that only occurs in Greenland and Antarctica.

Iceberg sightseeing tours depart throughout the day, but in order to witness the enormous icebergs beneath the midnight sun, tours must leave later in the evening. I met my group at the World of Greenland offices in the centre of town at 9.45pm. We were taken by minibus down to the wharf where we boarded our vessel and headed out to sea.

We motored our way from the town and slowed once we reached the more active parts of the glacier. The previous day I had visited Eqi Glacier, so had seen plenty of gargantuan ice walls. Sliding unhurriedly between the icebergs of the icefjord while the sun rolled across the horizon was an entirely different experience.

Gone were the stark contrasts of gleaming white glacier sandwiched between the pristine water and vivid blue sky. Instead, colours swirled together in a palette of afterlight. The icebergs absorbed and echoed the hue of the sky while the water mirrored it all in its calm façade.

In the silence and stillness, it looked like an artist’s canvas of pastel and watercolour: idyllic and surreal.

The peace was disturbed only by the thin-rippled wake of our boat and the breaching of a humpback whale that joined us in the bay. As we gently drifted onwards a low, thick mist rolled in bringing with it yet another layer to the composition.

Two single-masted sloops with crimson sails arrived, cutting in and out of the fog, dancing between the ‘bergs towering beside them. The scene continued to play out: the humpback returned, now joined by a seal as the boat turned back towards town.

Passengers milled on the deck, hugging hot drinks and burrowing into their scarfs, barely making a sound save the occasional exclamation when the whale breached the surface.

Midnight came and went and the colours changed from swirls of pastel to darker hues of amber and crimson. The wild and uncanny combination of rock, sea and ice beneath a never-setting sun was nothing short of surreal for those of us from prosaic climes.

The rainbow-coloured houses of Ilulissat began to re-appear on the horizon. As the night grew chilly, fewer and fewer passengers remained on deck, choosing instead to sit inside and watch the landscape flit by through the windows.

The temperature dropped, but the sky didn’t darken. In fact, it began to brighten. It was, after all, early morning and we were edging towards dawn – if there is such a thing in this land of the midnight sun.

Iceberg sightseeing in Ilulissat: the essentials

Where: Ilulissat is slowly starting to meet demand with a growing selection of accommodation options. My visit during the peak month of July was a last-minute decision so most of the hotels were fully booked. With few options left, I stayed at Ilulissat Apartment, a basic self-catering apartment around 10 minutes’ walk from the centre. Popular hotels include Hotel Hvide Falk, Hotel Arctic and Hotel Icefiord.

There is also a growing number of Airbnb options available throughout town. Click here to get a discount on your first stay.

When: The best time for an iceberg sightseeing tour is from mid-June to mid-September, although tours do run year round. Officially, the midnight sun in Ilulissat lasts from 21st May 21st to 24th July. This coincides with the best time for visiting Ilulissat in general as the weather is at its best for spotting whales, hiking, kayaking and other activities in the region. However, it is also the peak season with hotels and lodges selling out fast so it’s best to book ahead.

How: I booked my iceberg sightseeing tour with World of Greenland at their main offices in the centre of Ilulissat. Excursions run several times a day year round, but for midnight viewing book onto the 10pm sailing. The tour meets at 9.45pm and last around 2.5 hours.

The price per adult is DKK 695 ($100 USD) and includes tea and coffee throughout the trip.

Tours meet outside the main office where minibuses meet customers and transport them to the wharf where boats depart. After the tour, minibuses return customers to the offices or to the main hotels in town.

I flew to Kangerlussuaq from London via Copenhagen in Denmark. From there I booked an internal flight to Ilulissat with Air Greenland who essentially have a monopoly on domestic flights in Greenland. Book flights via Skyscanner.