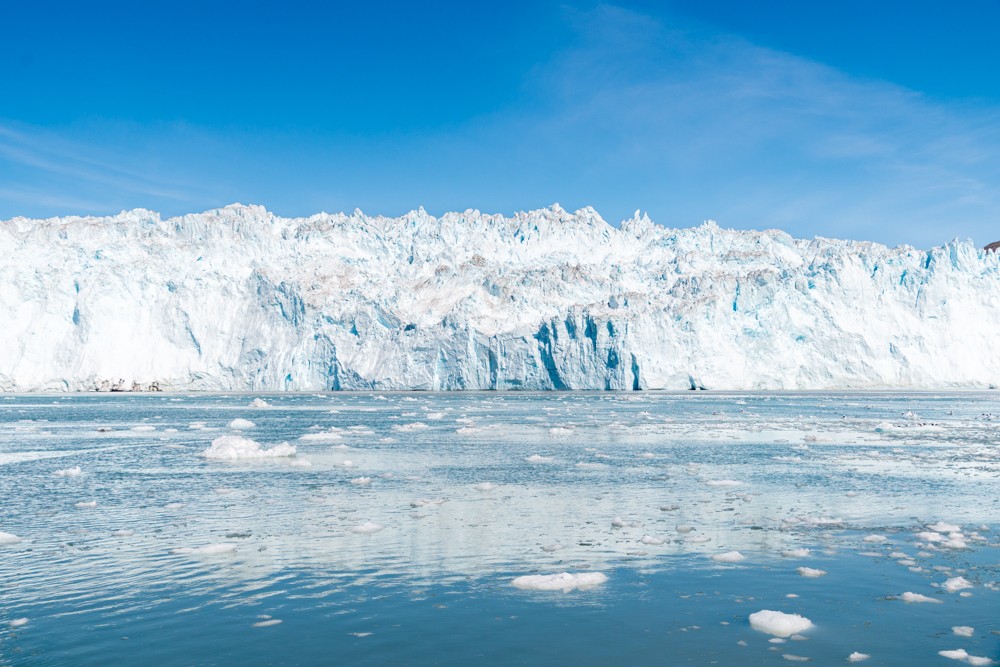 The Eqi Glacier boat tour takes travellers to the precipice of the planet. There you will find an almost supernatural experience

The gigantic Eqi Glacier in Greenland sits around 430km north of the Arctic Circle and around 1,600km south of the North Pole. On a planet of nearly eight billion people, very few carve out an existence at these latitudes.

Eqi, meaning ‘edge’ in Greenlandic, is an apt name for a glacier positioned at the last frontier of humanity. If Earth were indeed flat, Eqi Glacier may well be the spot marked on maps where ships disappear.

I visited Ilulissat following my adventures trekking the Arctic Circle Trail. After the disappointment of failing to complete the trail, I was keen to make use of my remaining time in Greenland. On arrival in Ilulissat, I hastily booked an Eqi Glacier boat tour with World of Greenland.

Positioned around 80km north of Ilulissat – a Greenlandic word for ‘icebergs’ – it takes at least three hours to reach Eqi by boat. Our vessel left the harbour at Ilulissat and cruised up the picturesque Ataa Strait, the long stretch of water in the Disko Bay region of western Greenland. Travel times can be longer depending on weather and sea conditions. I was fortunate: the day was glorious and the waters were calm.

The journey along the Ataa Strait to Eqi Glacier

The journey there was worth the money alone. Slicing through the calm waters outside of Ilulissat, signs of civilisation quickly receded. The boat manoeuvred slowly and carefully through the throng of gently rocking icebergs, before gradually picking up speed as it left the colourful town behind.

We motored on, pausing briefly by a small glacier-fed waterfall spilling over the cliffs above. Eqi Glacier finally emerged from between black cliffs on the horizon; a gleaming white arc above the water. At first glance, it didn’t appear as large as I’d been led to believe. Had I been duped by marketing hyperbole?

As we drew near, a smaller vessel cut across the glacier’s facade. Only now, with a tiny man-made contraption before it, did the true scale of the glacier materialise.

After a further hour of travel directly into its ever-widening expanse, I was heartened to see the sheer scale of this natural wonder reveal itself.

It was colossal. Behind the relatively insignificant wall of ice where our boat was positioned sat the immense Greenland ice sheet (or icecap). This vast body of ice covers 1,710,000km2 of Greenland – approximately 80% of its land surface.

Generally thicker than 2km (and 3km at its thickest), the Greenland ice sheet is the world’s second largest body of ice. Only the Antarctic ice sheet at the antipode of the planet is bigger. Despite its enormity, Eqi – along with most of Greenland’s glaciers – is retreating.

The melting of Greenland’s glaciers and ice sheet has been widely reported, particularly following an unprecedented summer in the Arctic where heatwaves accelerated the ice melt in the northern hemisphere. This year, a team of scientists revealed the Greenland ice sheet has begun melting even in winter.

Known as the calving glacier, Eqi is five kilometres wide where it meets the sea and can be up to 250m at its highest. It may not be the biggest in the area, but the glacier is one of the most active in Greenland. Not long after our arrival, it promptly accommodated with the first of several irruptions.

A shaft of ice sliced away from its walls and thundered into the sea, sending seagulls tearing off into the sky. Immediately, the water around us began to beat. It is for this very reason that our boat had to remain at a safe distance from the glacier wall. When exceptionally large chunks of ice carve from the glacier, they can produce huge waves – even small-scale tsunamis.

More calving followed and the water around our boat changed in both appearance and texture. When we arrived, the water was smooth and clear. Now, it was thickening with small icebergs and slush as debris from the glacier surrounded our boat.

The surface took on an uncanny, almost hypnotic tone as the carpet of white pulsed beneath the hull. Standing there, swaying on the boat as it gently rocked in the water’s swell, felt like hovering on the edge of the world.

My cheeks turned scarlet from the wind and my fingers stiffened from the cold, but I, like everyone else on board, could not tear myself from the ethereal beauty of the glacier. It was utterly captivating.

The Eqi Glacier boat tour really does feel like a journey to the edge of the Earth. Here, at the precipice of the planet, it is clear that we humans are trespassing on nature’s premises. Here, she calls the shots. I was allowed to stay for a while, but only on her terms.

Where: Ilulissat is slowly beginning to meet accommodation demand with a growing selection of options. My visit during the peak month of July was a last-minute decision so most of the hotels were fully booked. With few options left, I stayed at Ilulissat Apartment, a basic self-catering apartment 10 minutes’ walk from the centre of town.

Other popular but more expensive hotels include Hotel Hvide Falk, Hotel Arctic and Hotel Icefiord. There is also a growing number of Airbnb options available throughout town. Click here to get a discount on your first stay.

When: The best time for an Eqi Glacier boat tour is from mid-June to mid-September when the glacier can be safely reached. This is also the best time for visiting Ilulissat as the weather is at its best for spotting whales, hiking, kayaking and witnessing the famed midnight sun. This is also the busiest time of season with hotels and lodges selling out fast so it’s best to book ahead.

How: I booked my Eqi Glacier boat tour with World of Greenland at their main offices in the centre of Ilulissat. Excursions run daily from June to September meeting at 9.45am. The trip out to the glacier usually takes between three to four hours, but can take longer depending on conditions. The boat stays by the glacier for approximately two hours.

The price per adult is DKK 2,295 ($140 USD) and includes a light breakfast served shortly after departure followed by a substantial cold lunch just before arriving at Eqi Glacier. Complimentary tea and coffee is available throughout the day.

Tours start outside the main office where minibuses meet customers and transport them to the wharf where the boat departs. After the tour, minibuses return customers to the offices or to the main hotels in town.

For more information and to book, visit the World of Greenland website, email info@wog.gl, call +299 94 43 00 or drop by their office in town between 8am and 6pm.

I flew to Kangerlussuaq from London via Copenhagen in Denmark. From there I booked an internal flight to Ilulissat with Air Greenland who essentially have a monopoly on domestic flights in Greenland. Book via Skyscanner.