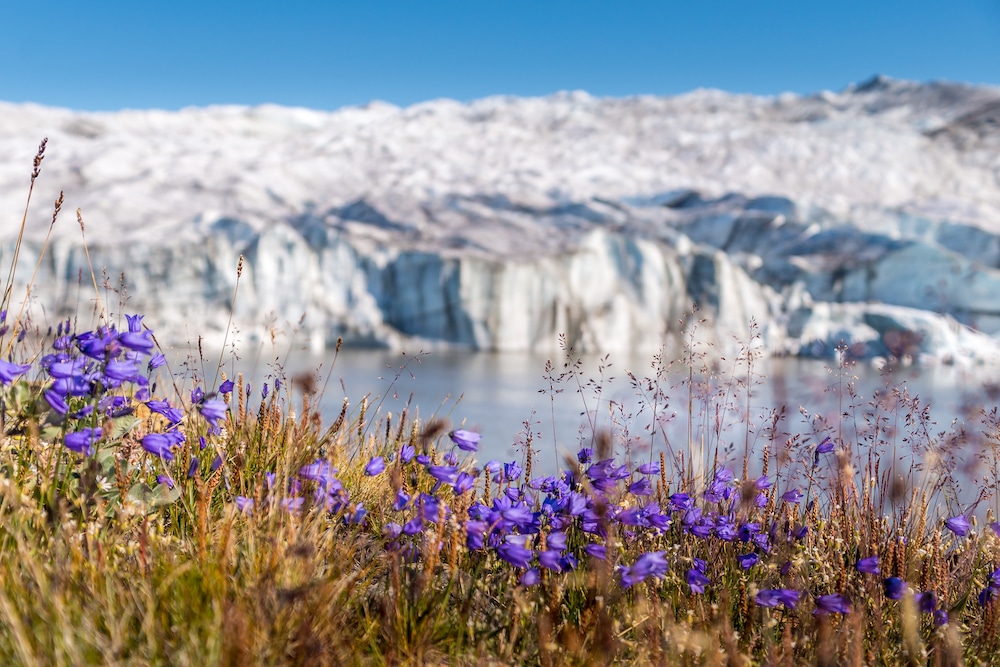 The understated and lonely settlement of Kangerlussuaq in Greenland feels like the edge of the world. Despite lying 50km north of the Arctic Circle, however, there is little evidence of the spectacular scenery that can only be found in the most extremes of the planet: the Polar Regions.

Just a short journey along a dry and dusty dirt road lie thundering glacial waterfalls, arid Arctic desert, a colossal glacier and the fringes of a gigantic ice sheet that shrouds the largest island in the world. En route, visitors witness one of the most dramatic transformations of landscape imaginable.

Following my adventures trekking the Arctic Circle Trail, I took an overnight half-tour, half-hike trip from Kangerlussuaq to the Greenland ice sheet and Russell Glacier.

From the arid Arctic desert to a gigantic glinting ice sheet I found a remarkable, almost alien, but profoundly beautiful world.

The small but sprawling town of Kangerlussuaq doesn’t have much: a population of around 500, an international airport and scattering of overpriced and underwhelming accommodation. Founded in 1941 as an American military base during the Second World War, the airport is an important transport hub for travellers en route to Ilulissat, Greenland’s most popular tourist destination.

However, 37km to the east of Kangerlussuaq, along a dirt road built by Volkswagen in 2000 to test their cars in extreme conditions, is the brink of the infamous Greenland ice sheet. The ice sheet (or icecap) is a vast body of ice covering 1,710,000km2 – approximately 80% of the land surface of Greenland.

Generally thicker than 2km (3km at its thickest), the Greenland ice sheet is the world’s second largest body of ice. Only the Antarctic ice sheet is larger.

The melting of Greenland’s ice sheet has been widely reported, particularly following an unprecedented summer in the Arctic where heatwaves accelerated the ice melt in the northern hemisphere. This year, a team of scientists revealed that the Greenland ice sheet has begun melting even in winter.

Point 660, misleadingly named because it was initially thought to be 660m (2,165ft) above sea level, is actually no more than 525m (1,720ft) at its highest. It is here that the dirt road ends and meets a band of frozen, stony moraine that banks the vast icecap.

Extending westwards from the ice sheet is Russell Glacier, also referred to as Reindeer Glacier by locals. The active glacier advances approximately 25m every year and is skirted by the fresh meltwater outflow from the adjoining ice sheet. Several more outflow streams discharge from the base of the glacier to form the Akuliarusiarsuup Kuua River further downstream.

I joined an Albatros Arctic Circle tour to the ice sheet. Meeting at the airport, the off-road bus ground its way up the Sandflugtdalen Valley, pausing at a couple of viewpoints en route. The route passes through the Aasivissuit – Nipisat Inuit Hunting Ground between Ice and Sea, one of UNESCO’s newest World Heritage Sites.

At the end of the road, our group disembarked to pick our way across the muddy moraine leading to the ice sheet. Soon I was met by the biggest bank of ice I’d ever seen (in fairness there is only one bigger).

The sheer magnitude of the white expanse was overwhelming. Before me, the ice stretched 400km to the east, 1,600km to the north and 800km to the south. Standing at its edge, I felt very small indeed.

Where the ice met the moraine, it was grey and muddied. I wanted to cross this and reach the cleaner, whiter ice on the horizon. After 15 minutes of crunching, I was adrift in a sea of ice. I was sweating from the exertion, but looking around, it felt like I’d barely moved, so immense was the scene.

Not wanting to lose sight of the group, I stopped. Around me, small streams coursed their way across the surface, cutting gullies and tunnels in the ice. Above me, without a cloud in the sky, the sun beat down on the ice reflecting heat upwards. It was surreal.

I started to make my way back towards the moraine, pausing frequently to marvel at the frozen landscape. Back at the edge, our guide pointed out some excellent viewpoints where the bright ice rose above the dark moraine in a stark contrast of ebony and ivory.

Back on the bus, I asked our guide where would be a good place to leave the tour. I wanted to camp near Russell Glacier so had asked to be dropped off on the return journey.

On the way in, I had seen a large rocky gorge with a waterfall beside a grassy crest. Our guide informed me it was near a rarely-used picnic sight called Israndsdalen. Sold on the idea, a few minutes later I was waving goodbye to the group and hiking across the grass in the direction of the river.

The powerful waterfall is from the meltwater outflow from the ice cap. It cuts and winds its way into a deep gorge before the river widens alongside Russell Glacier. I followed the river along the gorge until I was opposite the glacier wall.

Here, I pitched my tent on a grassy patch above a stony beach before dropping down to inspect the glacier from the riverbank. The glacier meets the river like a cliff meets the sea: with a sheer wall carving straight into the surface. Here, icebergs slice away from the glacier and make their way downstream, melting into the Akuliarusiarsuup Kuua.

I spent the rest of my evening watching the hues of the glacier shift, glowing warm in the evening light. Occasionally, I would hear a crack as pieces of ice prised apart deep within the frozen tomb. This was without doubt one of the finest camping spots I’d ever had the pleasure to pitch.

The following morning was just as delightful. I decamped and made my way back towards the road to begin the 26km amble back to Kangerlussuaq. En route, I paused at an exceptional viewpoint at the head of a lake, banked by Russell Glacier, just as I was leaving the UNESCO site.

Further down the road I passed the mangled remains of a US aircraft that crashed in 1968 and then the distinctive peak of Sugarloaf Mountain. Here, a trail doubles back for those who want to climb to the summit of the 353m (1,158ft) peak. By then I was beginning to tire so continued on my way to Kangerlussuaq.

The valley widened dramatically as I approached town, entering an area of Arctic desert. The valley floor was dry and dusty, banked by thickets of willow.

The road back to Kangerlussuaq

My half-tour, half-hike to the ice sheet and Russell Glacier had been an outstanding mini-adventure and the perfect postscript to my Arctic Circle Trail escapade. There are very few places on this planet – only two in fact – where it’s possible to see such sights.

The town of Kangerlussuaq, understated as it may be, is an excellent gateway to some of nature’s most glorious wonders.

Visiting the Greenland ice sheet and Russell Glacier: the essentials

What: Visiting the Greenland ice sheet and Russell Glacier near Kangerlussuaq.

Where: In Kangerlussuaq, I stayed at the basic but clean Polar Lodge (DKK795 / $120 USD) when I arrived and camped at the nearby campsite for DKK60 ($9 USD) during my second visit. Other options include the Kangerlussuaq Hotel located in the airport and the Kangerlussuaq Youth Hostel.

During my overnight hike I camped at a spot known as Israndsdalen next to a meltwater river alongside Russell Glacier. Nearby is a picnic area with some eco-toilets positioned along a trail leading back to the main road.

When: The best time for trekking in Greenland is from June to August when the weather is at its best and the days are longest (never-ending at times). August and September see temperatures drop and overnight snow arrive.

That said, tours with Albatros Artic Circle to the icecap at Point 660, which also stop at Russell Glacier, run year round (see here). Tours solely to Russell Glacier run from February to November.

How: I joined a tour with Albatros Artic Circle to the icecap at Point 660, which stops briefly at Russell Glacier for photos only on the way to the icecap. I arranged with the driver to drop me off on the way back near to the waterfall at Israndsdalen. From here, it is a short walk along the river to where I camped for the night.

The following day I hiked the remaining 26km back to Kangerlussuaq, pausing at a number of sights en route.

I flew to Kangerlussuaq from London via Copenhagen in Denmark. Air Greenland essentially have a monopoly on domestic flights. Book via Skyscanner.

The Cicerone Guide to Trekking in Greenland is the ideal companion for visiting the Greenland ice sheet and Russell Glacier. It includes a detailed route description, images and maps.