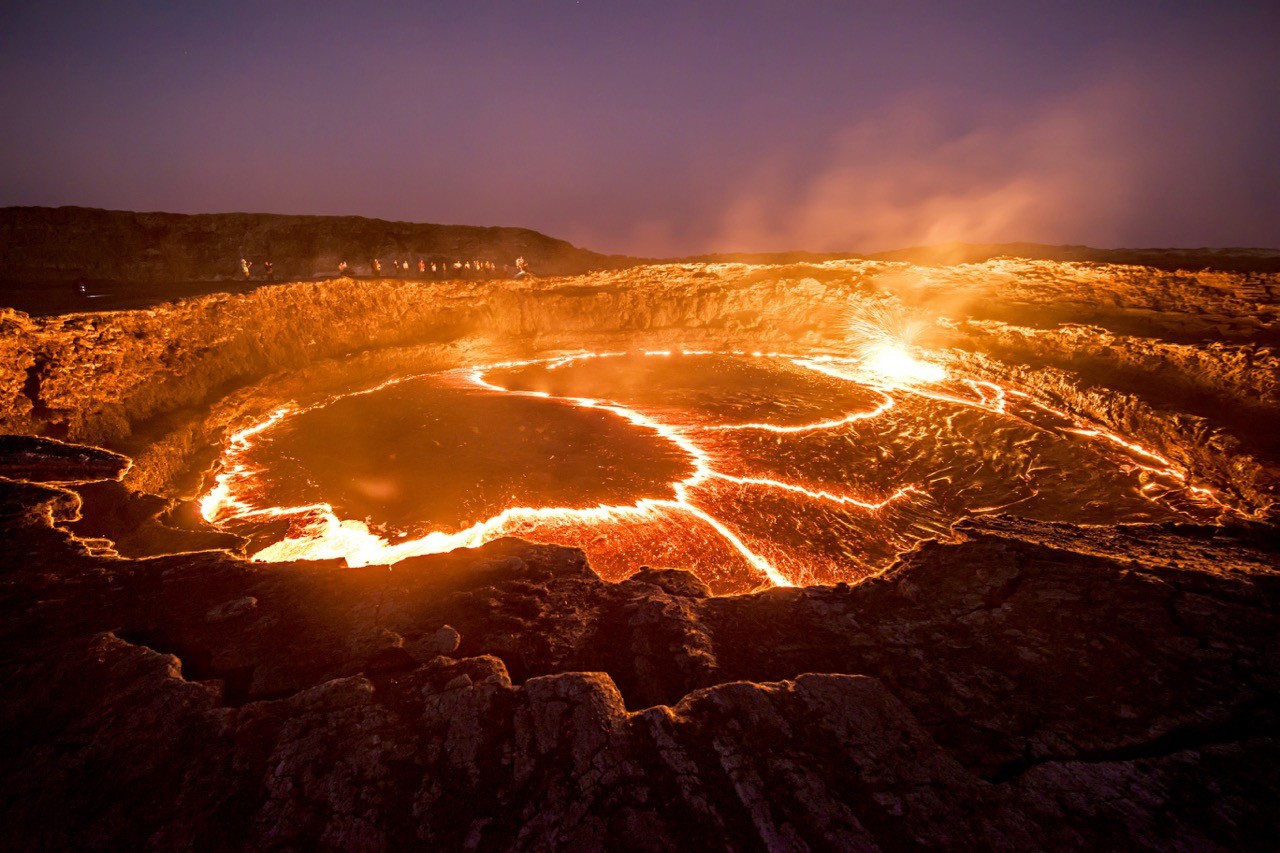 Technically, scientists define an ‘active volcano’ as one that has erupted in the last 10,000 years. By this definition, there are 1,500 active volcanoes in the world today, 75% of which are located along the evocatively-named Pacific Ring of Fire. Of course, some active volcanoes erupt far more frequently than the definition may imply.

Kīlauea in Hawaii is currently the world’s most active volcano, followed by Etna in Italy and Piton de la Fournaise on La Réunion. After that, a ranking is subjective, but the following list comes close.

Each entry has an associated Volcanic Explosivity Index, a ranking of the largest volcanic explosions in recent geological history (7 being the highest).

Kīlauea is the youngest volcano on Hawaii’s Big Island. It is located on the southeastern slope of neighbouring Mauna Loa and for many years was thought to be a satellite rather than a separate volcano.

Research has shown, however, that Kīlauea has its own plumbing system which carries magma to the surface from more than 60km below. Moreover, the summit lies on a line of volcanoes that includes Mauna Kea and Kohala, but not Mauna Loa.

Kīlauea’s eruptions have claimed parts of the island’s highways, rainforests, homes and even lives. Locals leave leis as offerings to the Fire Goddess Pele who is believed to reside in the lava lakes of Halema‘uma‘u crater.

Mount Etna is the largest of Europe’s most active volcanoes. It first erupted about 500,000 years ago and has been doing so continuously for 3,500 years.

Situated on the margin between the African Plate and the Eurasian Plate, Etna has a base circumference of an incredible 140km and is by far the largest of Italy’s three active volcanoes, the others being Stromboli and Mount Vesuvius.

In Greek mythology, Zeus trapped the deadly 100-headed monster Typhon beneath the mountain who in his rage causes “rivers of fire” to pour forth.

Piton de la Fournaise (“Peak of the Furnace”) has been spewing basaltic lava for more than half a million years. Located on the eastern side of Réunion, the volcano has a 8km (5mi) wide caldera which is partially breached by the sea and in the initial stages of failure.

Eventually, Enclos Fouqué caldera will collapse into the Indian Ocean and may, some say, cause a ‘megatsunami’.

As it stands, eruptions in the caldera cause limited damage as there is little infrastructure in the area. Eruptions outside of the caldera pose a more serious threat but are rare with only six recorded, the most recent in 1986.

Stromboli is renowned for its violent bursts of molten lava, ash and rock, inspiring the term ‘Strombolian’ in describing comparable activity in other locations.

Stromboli’s eruptions are visible for long distances and it is thus known as the “Lighthouse of the Mediterranean”. It is perched on Stromboli island, the peak of a large underwater volcano which begins over 1,000 metres beneath the surface of the sea.

According to scholar Clyde S. Kilby, author J.R.R. Tolkien identified his fictional volcano Mount Doom with Stromboli. The volcano also features in the conclusion of Jules Verne’s novel Journey to the Center of the Earth.

Mount Yasur holds a special place in our hearts as our number one travel experience. Located on the remote Pacific island of Tanna, Yasur is famous for its Strombolian eruptions.

The glow of the volcano can be seen from far distances and was apparently what attracted Captain James Cook on the first European journey to the island in 1774.

Today, it is one of the most accessible active volcanoes in the world but has proved fatal for careless tourists venturing into the lower rim area.

Ambrym is a large basaltic volcano with a 12km (7.4mi) wide caldera, the result of a huge explosion which took place around 50AD.

Ambryn’s eruptive force is rated at 6, the second highest in the Volcanic Explosivity Index.

Several times a century, Ambrym’s eruptions cause destruction on the island. Mount Benbow, one of Ambryn’s two active volcanic cones, erupted in 1913, causing the evacuation of the population to Mele on the main island of Efate.

Mount Merapi, located near the centre of Java, is the most active of Indonesia’s 130 active volcanoes. Smoke rolls off the mountaintop over 300 days a year and almost half its eruptions are accompanied by pyroclastic flows (clouds of superheated gases and incandescent solid particles).

Several of Merapi’s eruptions have caused fatalities. Sixty-four people were killed in 1994 and a series of eruptions in 2010 killed scores of people, injured dozens, and forced tens of thousands to evacuate.

Located in the Afar Depression in northeastern Ethiopia, Erta Ale holds the record for the longest-existing lava lake, present since 1906. Volcanoes with lava lakes are very rare; only Kīlauea, Ambryn and Erebus from this list along with Nyiragongo in DRC have persistent or near-persistent lava lakes.

Erta Ale, which means “smoking mountain” in the local Afar language, is one of the driest, lowest and hottest places on Earth with temperatures reaching up to 47°C (118°F).

The volcano offers some stunning views but there have have been reports of violence towards tourists, including a number of fatalities, so caution is advised.

Pacaya lay dormant for at least a century before erupting violently in 1965. Much of its activity is Strombolian but also includes ash eruptions and lava flows.

In May 2010, Pacaya erupted violently, ejecting debris and ash columns up to 1,500 meters (4,920ft). Ash rained down on a number of cities including the capital, Guatemala City.

The national disaster agency, CONRED, declared a red alert and recommended the evacuation of nearby communities. The eruption damaged hundreds of homes and killed several people including local news reporter Anibal Archila who was struck by volcanic debris.

Mount Erebus is the southernmost of the world’s active volcanoes. Located on Ross Island, it has a summit elevation of 3,794 metres (12,448 ft) and is home to one of the world’s few persistent lava lakes.

Erebus is remarkable because its low level but persistent activity allows volcanologists to study the Strombolian eruptive system very close to the active vents (hundreds of metres).

Erebus is also notable for its fumaroles: vents in the Earth’s crust which allow steam and gases to escape from volcanoes. As soon as the steam leaves one of these vents, it freezes, eventually forming massive snow chimneys.

Violent Earth is a spectacular visual exploration of the most awe-inspiring and dramatic events in nature: earthquakes, eruptions, mud slides, tsunamis and more.