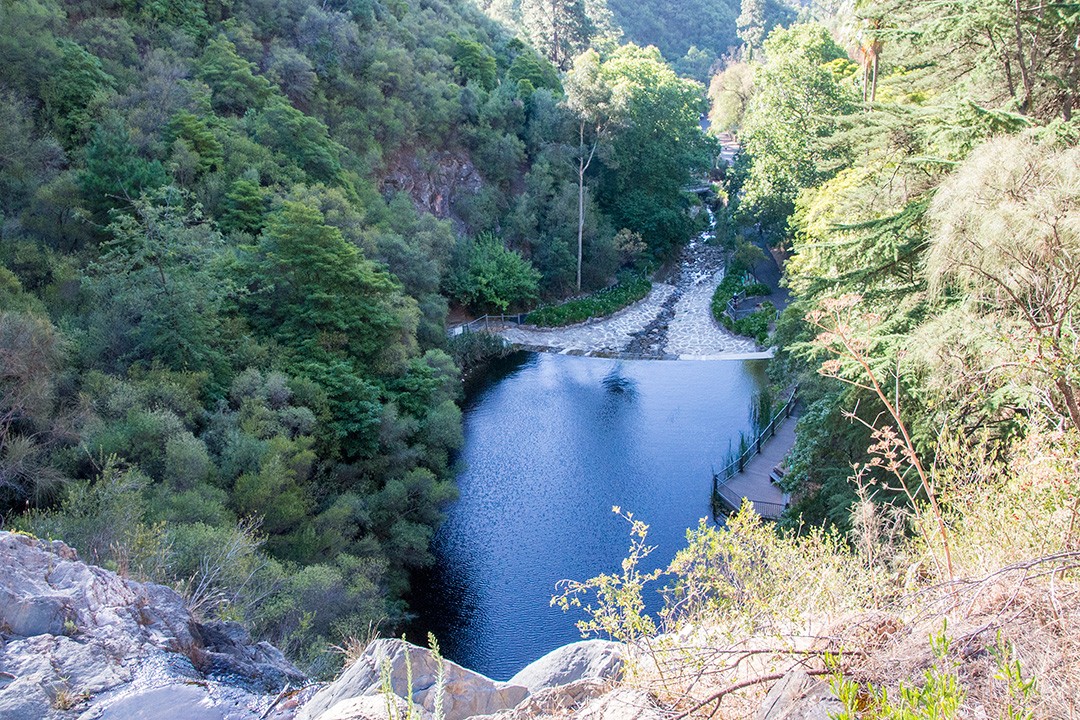 The Mount Lofty walking trails crisscrossing the Adelaide Hills all lead to one place: the summit – and some of the finest views in south Australia

In the Adelaide Hills, located just 15km east of Adelaide, sits Mount Lofty and its panoramic views across Adelaide’s skyline and beyond. The Adelaide Hills – an elevated landscape of rolling vineyards, rambling forest and steep ridges – have long been a peaceful retreat for the residents of Adelaide.

Despite its name, Mount Lofty at 727m (2,385ft) is no towering alpine peak. For Adelaide residents, however, it provides an excellent workout circuit and for tourists, an unparalleled views of the city’s skyline and surrounding landscape.

Like so many Australian landmarks, Matthew Flinders named Mount Lofty during his circumnavigation of the Australian continent in 1802. It was first summited by Europeans when explorer Collet Barker climbed it in 1831 – some six years before Adelaide was settled.

Today, the Adelaide Hills complex is home to a network of Mount Lofty walking trails, all leading to the majestic views at the summit where the Summit Cafe, a visitor centre and gift shop await exhausted hikers.

We hiked some of the routes and studied the other available options to create the below Mount Lofty walking trails map and route descriptions. All distances are one-way from the start of the trail to the summit.

We took the public bus from downtown Adelaide to Crafers Park ‘n’ Ride to start our hike up to Mount Lofty. The meandering walking trail from Crafers to Mount Lofty summit is a gentle alternative to the popular but punishingly steep Waterfall Gully Trail.

The route takes in elements of several different trails including the Spa Track, Birriee Trail and Heysen Trail before a final steep climb to the summit. Although not far from the Mount Lofty summit road (the main driving route to the summit), the trail feels just as secluded as those deeper in the forest.

We hiked down from Mont Lofty via the Waterfall Gully Trail. This popular trail is by far the most strenuous of the Mount Lofty walking trails. Starting at the Waterfall Gully car park, the trail quickly climbs through the park’s steep hills, native vegetation and stringybark forest. En route, hikers will pass no fewer than six waterfalls, although during the drier months they can be difficult to spot!

The Waterfall Gully route is one of Adelaide’s most popular exercise circuits so don’t be surprised to find plenty of lycra-clad athletes on the trail. The car park and cafe at the bottom can also be busy. One advantage of this trail is that there are cafes at each end, with Utopia in the Waterfall Gully car park at the bottom and the Summit Restaurant and Cafe at the top.

The Chambers Gully route to the summit of Mount Lofty is a much cooler option as it is well shaded and avoids any steep terrain until the final push just below the summit.

The hike begins at the very small roadside car park on Waterfall Gully Road and gently climbs before doubling back along the Bartrill Spur Track where it briefly gets a bit steeper. The trail also includes parts of the Wine Shanty Track, Nangare Track and Lodge Trail on its circuitous route to the summit.

The Long Ridge starts at the same place as the Chambers Gully and runs parallel to much of the route so the terrain is similar throughout. However, it does avoid doubling back as much (hence the slightly shorter distance).

After a brief flirt with the Wine Shanty Track, the route uses the Harford Trail before joining the final section of the Waterfall Gully Trail to the summit of Mount Lofty.

The Wine Shanty Trail is more of a circuitous bushwalk than a direct hiking trail around the Cleland Conservation Park. The route meanders through stringbark forest with several double-backs and steep but short climbs. Do not be put off as there are also several gentler sections.

The route takes in sections of the Harford Trail and Bartrill Spur Track. To gain the summit of Mount Lofty, hikers will need to use the Lodge Track to climb up to the summit, returning along the same route to continue along the Wine Shanty Trail.

The Heysen Trail is the longest dedicated walking trail in Australia, but fortunately, the section to Mount Lofty is only 4.5km! This short highlight of south Australia’s 1,200km Heysen Trail includes a walk through the Mount Lofty Botanic Gardens before crossing the main road and joining the final section of the Crafers Circuit to the summit.

The hike begins at the Mount Lofty Botanic Gardens car park and enjoys a fairly easygoing gradient throughout thanks to its circular route. Only the final section up to the summit is steep.

It is possible to continue following the trail from the summit in a clockwise direction around to where you started at the Mount Lofty Botanic Gardens car park (7.5km in total).

Where: We stayed at the Majestic Minima, a boutique hotel that provides stylish, affordable accommodation in North Adelaide. The 46 rooms are all unique, each designed by a local south Australian artist. Naturally, we booked the outdoorsy Room 202.

Rooms are compact but comfortable and the clever design manages to fit in a king-sized bed, desk and contemporary bathroom. The hotel also has a guest terrace, undercover parking and free laundry (much appreciated when travelling long term!).

The hotel is a five-minute drive from the city centre, and walking distance to a range of restaurants, bars and shops as well as the Botanic Gardens and the Adelaide Oval.

When: The best time to visit Adelaide is February to March when the weather is hot and the city comes alive with arts, festivals and events. Hiking is great in April when the high heat of summer is gone but temperatures are still warm and September when the land is lush from winter rains.

How: The Adelaide Hills are 15km from the city centre and most easily reached by car. Parking is available at the trailheads, but fees may apply. You can drive all the way to Mount Lofty Summit, but of course we advise using one of the Mount Lofty walking trails.

The Adelaide Hills are also accessible by public transport. Plan ahead via Adelaide Metro as wait times can be lengthy.

The following websites all have useful information on visiting and hiking in the Adelaide Hills and surrounding area: