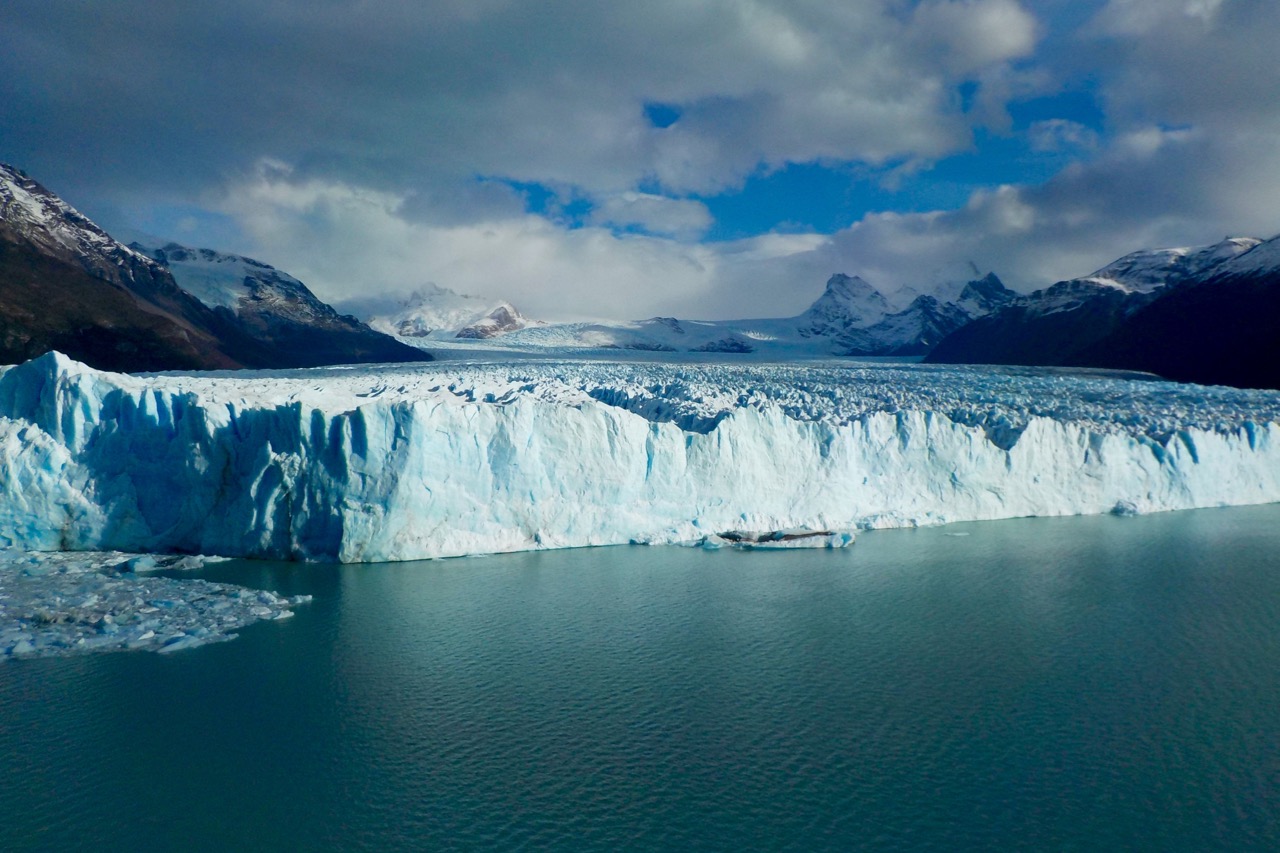 Perito Moreno Glacier is one of nature’s most glorious wonders. We see if it lives up to the legend and share tips on how to get there and when to go

Before writing this post, I lamented to Peter that once you’ve been travel writing for a while, it’s hard to come up with fresh superlatives.

“I mean, you can’t say gaze-catching instead of eye-catching and you can’t say stride-stopping instead of heart-stopping, can you?” I asked, forlornly sipping my tea. The cause of my dilemma was Perito Moreno Glacier, a sight so overwhelming it’s utterly, er, step freezing. Nevertheless, I shall try my best to describe what followed our foray to this giant Argentine wonder.

After the disappointment of getting to Patagonia too late, I was somewhat nervous about our visit to Perito Moreno Glacier. I had dreamt of visiting since 2007 when I included it in a top 10 travel list for a magazine. Would it now live up to the legend?

We awoke early and walked to El Calafate’s bus station to await our 8am bus. We didn’t bother booking a tour as it’s easy to get to Parque Nacional Los Glaciares by bus (see ‘Essentials’ below). As it was on the cusp of winter, there were only five other people on the bus. Were we going to get the glacier all to ourselves?

After a 1.5-hour bus journey full of glorious views, we arrived at the park. Our driver informed us of our departure time (4pm) and told us about an optional boat tour (190 ARS ($20) per person). We chose not to go on the tour because we were counting pennies but with more than five hours at the site, it’s not a bad idea if you have the budget.

With the practicalities out of the way, we walked to the first of many viewpoints. There we got our first close-up glimpse of the glacier. At this point I’d like to say that I know travel bloggers are prone to much gasping (“we both gasped”, “we gasped in awe”, “we both let out an audible gasp“) but I’m not embellishing when I say that in this case, I really did gasp at the sight before me. The expanse of blue ice – 250km2 (97 sq mi) in area and an average of 74m (240ft) in height – was unlike anything I’d ever seen before. In fact, next to Mount Yasur in Vanuatu, it was the most incredible thing we’ve ever seen.

It’s not just the stunning alien-like landscape that awes, but also the sounds of the glacier. There is a constant cracking, crackling sound as pieces of ice break away and crash into the water below. If you’re lucky, you’ll catch a glimpse of a car-sized chunk of ice slicing away and falling to the lake below. We managed to catch on camera the tail end of one such occurrence.

We spent the next few hours strolling the ‘catwalks’, wooden walkways strategically constructed to give visitors the best views. We were struck by how empty it was. We had read that it was often difficult to take an unobstructed picture due to the crowds but our winter visit gave us free rein.

We ate our packed lunch outside the (hugely overpriced) site cafeteria before returning to the glacier. One might wonder how there is enough to fill up five hours of time but the glacier is so mesmerising, it was easy to just stand and stare.

The interesting thing about Perito Moreno is that it’s one of the world’s few glaciers in a state of equilibrium (i.e. receding and growing at the same rate and thus in a state of balance overall). Every four or five years on average, the glacier advances so much that it ‘dams’ a volume of water, separating the section from the rest of the lake. With no outlet, the water in the dammed section rises as much as 30 meters until eventually the increased pressure breaks through the dam creating an almighty rupture.

We weren’t lucky enough to see this but standing there above one of nature’s greatest glories, I couldn’t really ask for more.

What: Perito Moreno Glaciar, one of the world’s few glaciers in equilibrium.

Where: Parque Nacional Los Glaciares, approximately 50km from El Calafate. We stayed at the super-cosy Hostería y Apart Jardín de los Presentes. It’s a 10-minute walk from the center but you get a two-storey apartment all to yourself with reliable hot showers and a gas fire. Breakfast is included and the staff are super helpful (but Spanish speaking only).

When: The best time to go is between November to March when the weather is at its best. That said, we visited in late May and had fair weather with the added bonus of practically zero tourists.

How: Book bus tickets with Cal Tur at El Calafate’s bus station (the only one in town). Tickets cost 280 ARS ($30 USD) per person for a return journey. Buses leave El Calafate at 8am and return at 4pm. Outside of winter (June to August), there is a second bus leaving El Calafate at 1pm and returning at 6pm. The buses tend to get full in the summer so book your ticket the day before.

The bus journey is approximately 1.5 hours each way and will stop at the park entrance where you will be asked to pay the entrance fee of 260 ARS ($28). A staff member will board the bus, take your payment and give you a ticket in return (valid for one day only).

The boat trip costs an extra 190 ARS ($20). It’s also possible to book a mini-trekking tour where you can walk on the glacier itself (approximately 1,300 ARS ($140), available from August to May). Your hostel will be able to book this for you.

Note that only food purchased at the cafeteria can be consumed within. We took a packed lunch and ate it outside. Also note that the road to Perito Moreno has a few switchbacks so you may want to pack some travel sick pills just in case. Finally, charge your camera and have plenty of available memory!

The nearest airport is at El Calafate but it only serves domestic routes. Check skyscanner.net for latest prices.