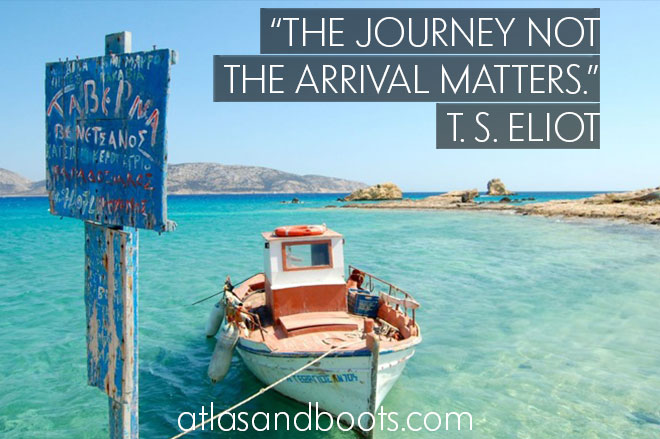 Our favourite inspirational travel quotes that encouraged us to travel – with abandon – over the years. Maybe they will do the same for you…

When I first went travelling at 21 years old my father gave me this inspirational travel quote scribbled on a piece of card.

Today, 10 years and over 60 countries later, it’s still in my wallet. Despite its tattered and dishevelled appearance it’s every bit as important to me now as it was then. It motivated me to get out and see the world and it remains one of the most inspirational travel quotes I know.

With that in mind, Atlas & Boots put together our 50 favourite inspirational travel quotes to encourage readers to explore, dream and discover the world.

1. “To my mind, the greatest reward and luxury of travel is to be able to experience everyday things as if for the first time, to be in a position in which almost nothing is so familiar it is taken for granted.”
Bill Bryson

2. “The world is a book and those who do not travel read only one page.”
St. Augustine

3. “I have found out that there ain’t no surer way to find out whether you like people or hate them than to travel with them.”
Mark Twain

4. “Our battered suitcases were piled on the sidewalk again; we had longer ways to go. But no matter, the road is life.”
Jack Kerouac

6. “Travel is fatal to prejudice, bigotry, and narrow-mindedness.”
Mark Twain

7. “Don’t tell me the sky’s the limit when there are footprints on the moon.”
Paul Brandt

8. “Travel is more than the seeing of sights; it is a change that goes on, deep and permanent, in the ideas of living.”
Miriam Beard

9. “The first condition of understanding a foreign country is to smell it.”
Rudyard Kipling

10. “A journey of a thousand miles must begin with a single step.”
Lao Tzu

11. “When preparing to travel, lay out all your clothes and all your money. Then take half the clothes and twice the money.”
Susan Heller

12. “A wise traveler never despises his own country.”
Carlo Goldoni

13. “We live in a wonderful world that is full of beauty, charm and adventure. There is no end to the adventures we can have if only we seek them with our eyes open.”
Jawaharial Nehru

14. “A good traveler has no fixed plans and is not intent on arriving.”
Lao Tzu

15. “There is no moment of delight in any pilgrimage like the beginning of it.”
Charles Dudley Warner

16. “To awaken quite alone in a strange town is one of the pleasantest sensations in the world.”
Freya Stark

19. “Do not follow where the path may lead. Go instead where there is no path and leave a trail.”
Ralph Waldo Emerson

21. “Once a year, go somewhere you’ve never been before.”
The Dalai Lama

22. “No one realizes how beautiful it is to travel until he comes home and rests his head on his old, familiar pillow.”
Lin Yutang

23. “What you’ve done becomes the judge of what you’re going to do – especially in other people’s minds. When you’re traveling, you are what you are right there and then. People don’t have your past to hold against you. No yesterdays on the road.”
William Least Heat Moon

24. “There are no foreign lands. It is the traveler only who is foreign.”
Robert Louis Stevenson

25. “Travel is glamorous only in retrospect.”
Paul Theroux

26. “A traveler without observation is a bird without wings.”
Moslih Eddin Saadi

27. “Your true traveler finds boredom rather agreeable than painful. It is the symbol of his liberty-his excessive freedom. He accepts his boredom, when it comes, not merely philosophically, but almost with pleasure.”
Aldous Huxley

28. “One’s destination is never a place, but a new way of seeing things.”
Henry Miller

29. “All travel has its advantages. If the passenger visits better countries, he may learn to improve his own. And if fortune carries him to worse, he may learn to enjoy it.”
Samuel Johnson

30. “Wandering re-establishes the original harmony which once existed between man and the universe.”
Anatole France

31. “I can’t control the wind but I can adjust the sail.”
Ricky Skaggs

32. “Too often travel, instead of broadening the mind, merely lengthens the conversation.”
Elizabeth Drew

33. “People travel to faraway places to watch, in fascination, the kind of people they ignore at home.”
Dagobert D. Runes

34. “If you reject the food, ignore the customs, fear the religion and avoid the people, you might better stay at home.”
James Michener

35. “The use of traveling is to regulate imagination by reality, and instead of thinking how things may be, to see them as they are.”
Samuel Johnson

36. “All journeys have secret destinations of which the traveler is unaware.”
Martin Buber

37 . “Perhaps travel cannot prevent bigotry, but by demonstrating that all peoples cry, laugh, eat, worry, and die, it can introduce the idea that if we try and understand each other, we may even become friends.”
Maya Angelou

39. “Two roads diverged in a wood and I – I took the one less traveled by.”
Robert Frost

40. “Travel and change of place impart new vigor to the mind.”
Seneca

41. “Traveling is a brutality. It forces you to trust strangers and to lose sight of all that familiar comfort of home and friends. You are constantly off balance. Nothing is yours except the essential things – air, sleep, dreams, the sea, the sky – all things tending towards the eternal or what we imagine of it.”
Cesare Pavese

42. “For my part, I travel not to go anywhere, but to go. I travel for travel’s sake. The great affair is to move.”
Robert Louis Stevenson

43. “A journey is best measured in friends, rather than miles.”
Tim Cahill

44. “A journey is like marriage. The certain way to be wrong is to think you control it.”
John Steinbeck

45. “There are far, far better things ahead than we leave behind.”
C.S. Lewis

47. “Travel does what good novelists also do to the life of everyday, placing it like a picture in a frame or a gem in its setting, so that the intrinsic qualities are made more clear. Travel does this with the very stuff that everyday life is made of, giving to it the sharp contour and meaning of art.”
Freya Stark

48. “To travel is to discover that everyone is wrong about other countries.”
Aldous Huxley

49. “All the pathos and irony of leaving one’s youth behind is thus implicit in every joyous moment of travel: one knows that the first joy can never be recovered, and the wise traveler learns not to repeat successes but tries new places all the time.”
Paul Fussell

50. “Twenty years from now you will be more disappointed by the things you didn’t do than by the ones you did do. So throw off the bowlines, sail away from the safe harbor. Catch the trade winds in your sails. Explore. Dream. Discover.”
Mark Twain

The Lonely Planet Ultimate Travel List is the definitive wish-list of the best places to visit on earth.