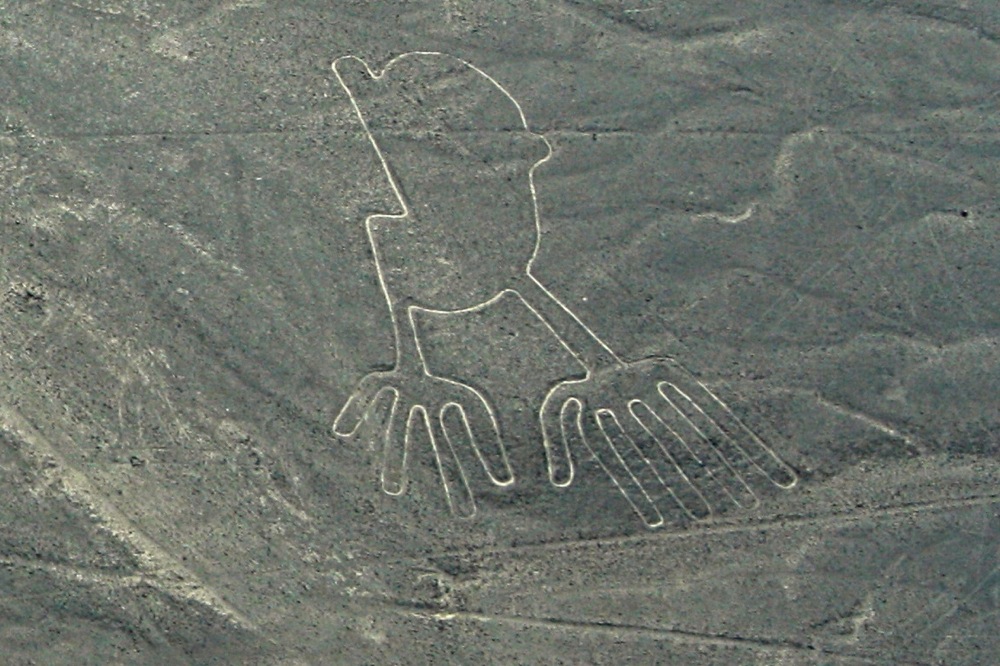 Take a Nazca Lines flight over one of the world’s great archaeological riddles. The 1,000 year-old uncanny figures are best seen from the skies

Very little ignites my wanderlust as strongly as a great travel mystery. And as travel mysteries go, the mysterious lines of the Nazca Desert in southern Peru are one of the greatest.

The network comprises over 800 straight lines, 300 geometric figures known as ‘geoglyphs’ and 70 animal and plant drawings or ‘biomorphs’. The lines are largely indiscernible from ground level – however, from the skies above they reveal an arresting network of figures and channels which spread across the desert below.

We booked our Nazca Lines flight with Peru Nasca Tours who collected us from our hotel in the morning for the short taxi ride to the small but comfortable Maria Reiche Neuman Airport, named after the German mathematician and archaeologist who dedicated her life’s work to researching and preserving the Nazca Lines.

On arrival at the airport we met our co-pilot, a charismatic Frenchman called Christopher who’d been flying over the lines for several years. (Needless to say, I kept Kia away from our charming French pilot…)

After completing some paperwork and paying the airport tax ($8 USD), we received a map of the flight path and watched a National Geographic documentary on the lines while waiting for our flight. It wasn’t long before our plane was ready to take us to the skies.

Kia and I love flying in small planes having taken lessons and flown over some dramatic scenery in small planes in Tonga. We squeezed onto the small Cessna airplane with just two other passengers and plugged into the plane’s intercom system.

“Can everyone hear me?” asked Christopher. “Ready?”
“Yes!” we responded in chorus.
“Then let’s go!”

The lines stretch in all directions and are said to have been etched into the desert by hand over decades, perhaps even centuries, from 200AD onwards. To the untrained eye they appear random and disjointed, but to the Nazca civilisation they were of great importance – important enough to dedicate huge portions of their lives to designing and creating these immense lines.

However, it is not the lines but the animal figurines that really fascinate. The flight path ensures that all passengers, whether sat on the left or right of the plane, will get a good view of at least 13 famous figures as well as the huge winter and summer solstice lines.

The pilot circles each figurine, tipping his wings so that each side gets the best view of the geoglyphs below the plane’s wingtip. The figures range from 40 to 300 meters in size and include a spider, whale, hummingbird, monkey, condor and even an astronaut!

Thirty minutes (literally) flew by and before we knew it, we were banking for the last time before scooping down onto the tarmac of the runway we’d left just a half-hour earlier.

So, for whom were the Nazca Lines made? How long did it take to make them? What did they signify? Could the ancient Nazca people perhaps fly? Were they offerings to the gods, or maybe even aliens? We’ll probably never know the answers to these questions and that’s just what makes the Nazca Lines such a beguiling travel mystery.

What: 30-minute Nazca Lines flight over the Nazca Desert on the southern coast of Peru. Information and maps are available for the flight as well as explanatory commentary from the co-pilot on where and when to look during the flight. Each aircraft carries 3-5 passengers, all with window seats.

Where: Nazca is a perfectly serviceable town with a range of accommodation and eating options. We stayed at Hospedaje Yemaya, a simple, clean and comfortable hotel with wifi just off the main high street. The friendly owner can help arrange other excursions in the area and suggest restaurants to suit all budgets.

When: The Nazca Desert is generally hot and sunny all year round with clear blue skies most days. The pilots say that visibility is usually best and turbulence lower between 7am and 10:30am. If you book with Peru Nasca Tours, they’ll ensure you fly during the optimal time.

How: Nazca can be accessed via bus from Lima in the north or Cusco in the east. Both options require overnight buses often changing at Arequipa, but can be relatively comfortable if you book the reclining (cama) seat options. Some bus companies (such as Cruz del Sur) offer “VIP” services which are worth the few extra dollars for the added comfort they provide.

Maria Reiche Neuman Airport is only for Nazca Lines flights and other chartered services, and does not have any connecting flights to other Peruvian cities. We stayed for two nights, which is plenty of time to make sure you see the lines, but you may wish to take advantage of other tours and trips available in the area.

Book ahead with Peru Nasca Tours through their website or contact them directly at info@perunascatours.com. A 30-minute Nazca Lines flight is priced at $110 USD not including the $8 airport tax.