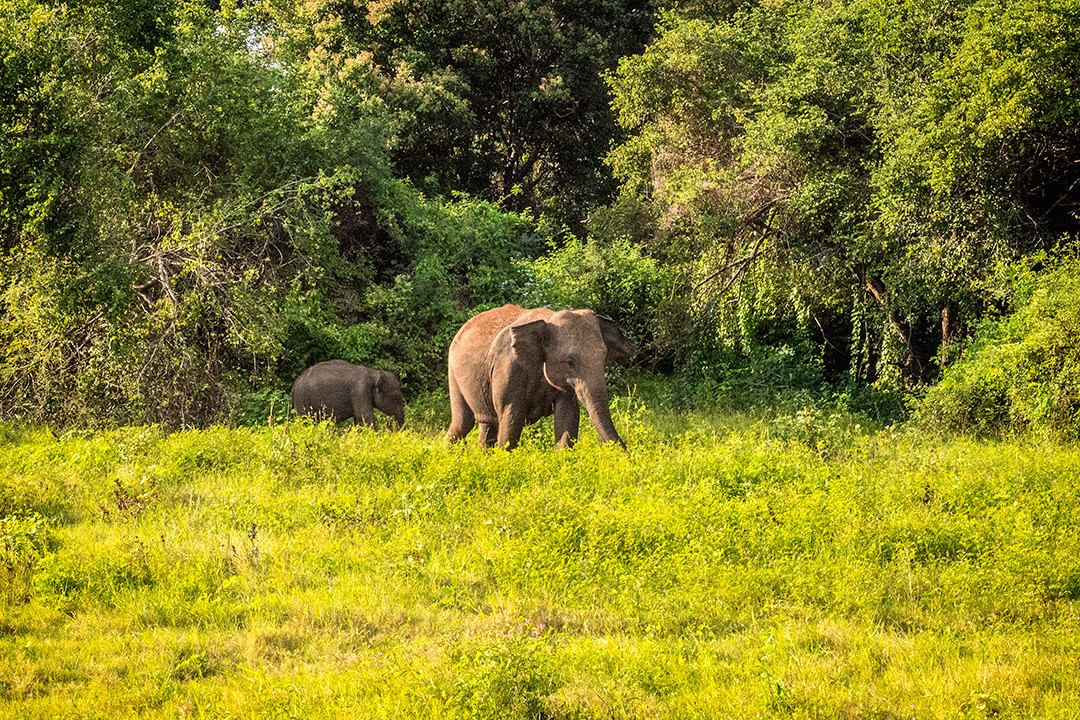 We explore the best national parks in Sri Lanka, their finest features, and when and where to see the country’s most celebrated animals

There is good reason for protecting so much of its lands. Sri Lanka is home to large populations of elephants, leopards, crocodiles and primates, making it one of the finest wildlife watching destinations in South Asia.

Sri Lanka is also one of Asia’s classic birdwatching destinations. Species include colourful kingfishers, darting bee-eaters and, of course, flamboyant Sri Lankan peacocks. There are myriad wildlife watching and safari options available to everyone from the dedicated naturalist to the interested layman.

We spent a month in the country exploring the best of Sri Lanka’s protected areas. Here are the best national parks in Sri Lanka depending on what you want to see.

Yala has one of the highest leopard densities in the world. It comprises five blocks with Block 1 alone home to an estimated 25 leopards. Yala received 350,000 visitors in 2013 and numbers continue to rise, making it Sri Lanka’s most popular national park.

This is Sri Lanka’s largest national park and second-best for leopard spotting. Visitor numbers remain low which makes for a deeply personal safari experience. However, animals are more skittish here and the dense forest makes spotting leopards much harder than in Yala.

Leopards can be spotted in all of these national parks, but it is much harder than Yala. Gal Oya is pristine, unspoilt and rarely visited, while Kaudulla’s main draw are the elephants. It is even rarer to spot leopards in Wasgamuwa, but there have been sightings in recent years. You’ll need patience, persistence and time to catch a glimpse of a leopard in any of these national parks.

For elephant watching alone, Udawalawe is arguably better than many of the more famous east African national parks. There are over 250 permanently resident elephants in the park, dozens of whom are easy to spot thanks to the open savannah-esque grassland in the park. Udawalawe is easily the best national park in Sri Lanka for elephants.

Where to stay: Ruhunu Safari Camping

Much less visited than nearby Yala, Bundala is home to a maze of waterways and lagoons. It may not seem like the best place for elephant spotting, but there is a small but very visible population of elephants here (up to 60).

We visited Kaudulla in early February and by this time, with the water level at its lowest, the elephants were like clockwork. Every afternoon, once the heat of the day had passed, the herds emerged from the undergrowth and made their way through the long grass to the watering hole.

Minneriya is another excellent option for elephant watching. Up to 200 elephants come to feed and bathe during what is known as ‘The Gathering’, the largest meeting of Asian elephants anywhere in the world. The Gathering takes place between May and September, although there is still a population of between 70 and 100 elephants during the rest of the year.

There are lots of elephants in Yala – estimates suggest around 300. However, despite their size and numbers, they can be surprisingly difficult to spot. We only spotted one elephant in Yala and that was at night-time while returning to our camp.

Bundala is the best national park in Sri Lanka for birdwatching. It provides refuge to almost 200 species of birds within its 62 sq km area, with many journeying from Siberia and India to winter here. It’s also a winter home to the greater flamingo. Up to 2,000 have been recorded within the park!

There are over 200 species of birds in Yala including terns, curlews and pintails escaping the northern winter. Permanent residents include jungle fowl, hornbills, orioles and peacocks.

The last major undisturbed region in Sri Lanka is home to over 160 species of bird including 20 of Sri Lanka’s 26 endemic species. The elusive species of red-faced malkoha, green-billed coucal and Sri Lanka blue magpie can all be observed here.

Where to stay: The Rainforest Ecolodge

In total, the protected areas cover almost 15% of Sri Lanka’s land area and encompass an extensive variety of terrain. The map and table below detail Sri Lanka’s major national parks and reserves along with their location and standout features.