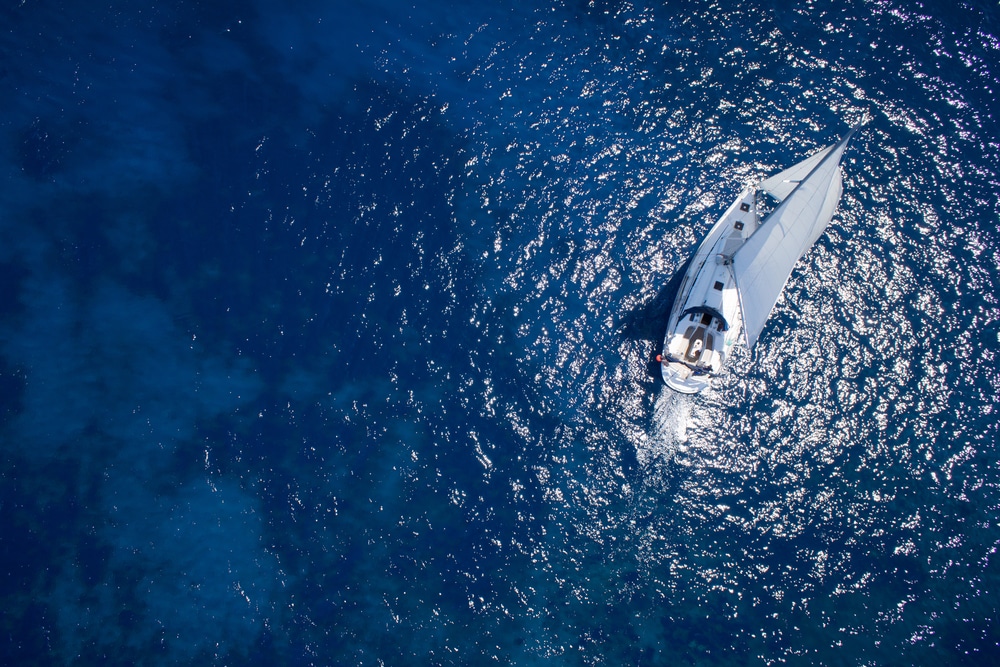 We share some of our favourite best sailing movies, from Hollywood blockbusters and indie films to illuminating documentaries

From tall ship sailing off the west coast of Scotland to sailing the Whitsunday Islands in Australia, more and more of our travels have taken place on the water.

However, until I make the leap from weekend warrior to blue water sailor, I’ll have to make do with films, books and daydreams.

With that in mind, I’ve put together a list of the best sailing movies I’ve seen. What follows is a broad mix of modern and classic, indie and feature, drama and documentary film. Whatever their style, these flicks are thoroughly wet and wonderful.

And, I’m sorry about the pun, but you know, ship happens.

Listed in no particular order, these nautical movies include terrifying ordeals of tragedy, inconceivable stories of survival, turbulent tales of adventure and wild journeys of discovery – perfect for a night in on a dry and comfy sofa.

1. Kon-Tiki (1950)
Let’s start with one of the best sailing movies ever made. In 1947, Heyerdahl and five others sailed from Peru on a balsa wood raft. This is the classic Academy Award winning documentary of their astonishing journey across 4,300 miles of the Pacific Ocean.

2. Red Dot on the Ocean (2014)
Once labelled a ‘youth-at-risk’, 30-year old Matt Rutherford risked it all in an attempt to become the first person to sail solo non-stop around North and South America. Red Dot on the Ocean is the story of Matt’s death-defying voyage and the childhood odyssey that shaped him.

3. The Dove (1974)
Produced by Gregory Peck, this coming-of-age adventure is based on the true story of Robin Lee Graham. At 16, he set sail in a 23ft sloop determined to be the youngest person to sail around the world.

4. Wind (1992)
In over 140 years of competition, the US has lost the America’s Cup just once. This is a fictional story of the American challengers intent on winning back sailing’s top prize. A tale of money, power, love and ambition follows… oh, and some sailing.

5. Morning Light (2008)
A riveting true-life adventure aboard the high-tech sloop Morning Light. Fifteen rookie sailors have one goal in mind: to be part of her crew, racing in one of the most revered sailing competitions in the world, the Transpac Yacht Race.

6. Between Home – Odyssey of an Unusual Sea Bandit (2012)
An independent filmmaker’s account of his solo voyage from the UK to Australia, negotiating the Pacific and Atlantic Oceans en route. A trip that eventually takes over two years to complete.

7. Styx (2019)
When a lone yachtswoman comes across a sinking ship of refugees, she is torn away from her idyllic trip and tasked with a momentous decision. Should she act when authorities tell her to sail away?

8. Captain Ron (1992)
After inheriting a yacht, a Chicago businessman enlists long-haired, one-eyed low-life Captain Ron to pilot the yacht from the Caribbean to Miami. During the voyage, the sailor frequently loses his way while becoming a hit with the businessman’s family. Goofy comedy starring Kurt Russell and Martin Short widely recognised as one of the funniest sailing movies ever made.

9. Maidentrip (2013)
This riveting documentary chronicles the life and adventures of 14-year-old Laura Dekker who set out on a two-year voyage in pursuit of her dream to be the youngest person ever to sail solo around the world.

10. Kon-Tiki (2012)
A well-crafted retelling of the epic original and one of the best sailing movies ever made. This dramatised version is a throwback to old-school adventure filmmaking that’s exciting and entertaining in spite of its by-the-book plotting.

11. Abandoned (2015)
Four men set sail on the trimaran yacht Rose Noelle. It capsizes in a storm, trapping the crew in a space the size of a double bed. After 119 days adrift, the yacht washes ashore. The crew’s story is extraordinary, but doubt is cast on their claims and they face hostility from the media and authorities.

12. Adrift (2019)
There are far better films on this list, but Adrift is just about worth a watch. Based on true events, a young couple embark on an adventure of a lifetime that brings them face to face with one of the worst hurricanes in recorded history.

13. The Perfect Storm (2000)
A skipper insists that his crew go out on a final fishing trip before winter sets in. Unknown to them, a brutal storm is on its way. While the special effects are excellent for the time, the film falls a little short on characterisation.

14. Sea Gypsies: The Far Side of the World (2016)
The vessel is Infinity, a 120ft hand-built sailboat, crewed by a band of miscreants. The journey, an 8,000-mile Pacific crossing from New Zealand to Patagonia with a stop in Antarctica.

15. Turning Tide / En Solitaire (2013)
Franck Drevil is a star skipper, having won the latest Vendée Globe, the most prestigious round-the-world single-handed yacht race. However, with this year’s race approaching, a sudden accident forces Franck to withdraw.

16. Knife in the Water (1962)
When a young hitchhiker joins a couple on a weekend yacht trip, psychological warfare breaks out as the two men compete for the woman’s attention. A storm forces the small crew below deck and tension builds to a violent climax.

17. Dead Calm (1989)
This tense thriller tells the story of an Australian couple (Nicole Kidman and Sam Neill) whose yacht cruise is violently interrupted by the mysterious lone survivor (Billy Zane) of a ship whose crew has perished.

18. The Riddle of the Sands (1979)
A classic British swashbuckling yarn based on the early English spy novel of the same name. In 1901, two British yachtsmen visit Germany’s Frisian Islands and accidentally discover a German plot to invade England.

19. Maiden (2019)
The story of Tracy Edwards, a 24-year-old cook on charter boats, who became the skipper of the first-ever all-female crew to enter the Whitbread Round the World Race in 1989.

20. White Squall (1996)
Based on a true incident from 1960, White Squall is the story of the tragic sinking of the Albatross, a prep school educational two-masted schooner, during a Caribbean storm. Starring Jeff Bridges.

21. The Mercy (2017)
Starring Colin Firth and Rachel Weisz, this is certainly no heroic tale. Instead, it’s the dramatisation of the bizarre story of amateur sailor Donald Crowhurst and his attempt to pull off one of the greatest hoaxes of our time: pretending to be the first to sail singlehandedly around the world!

22. Deep Water (2006)
Following on from the above, Deep Water is a British documentary about the remarkable story of the first Golden Globe round the world yacht race, focusing on the psychological toll it took on its competitors – particularly one Donald Crowhurst.

23. Captains Courageous (1937)
A spoiled brat who falls overboard from a steamship gets picked up by a fishing boat, where he’s made to earn his keep by joining the crew in their work. Based on the 1897 novel by Rudyard Kipling.

24. Open Water 2: Adrift (2006)
A silly premise, but entertaining nonetheless. Six friends jump off a yacht without lowering the ladder first. With no way to climb aboard, it’s only a matter of time before bickering turns to terror.

25. Master and Commander – The Far Side of the World (2003)
During the Napoleonic Wars, a brash British captain (Russell Crowe) pushes his ship and crew to their limits in pursuit of a formidable French war vessel.

Here’s what our readers have added to the list of the best sailing movies.