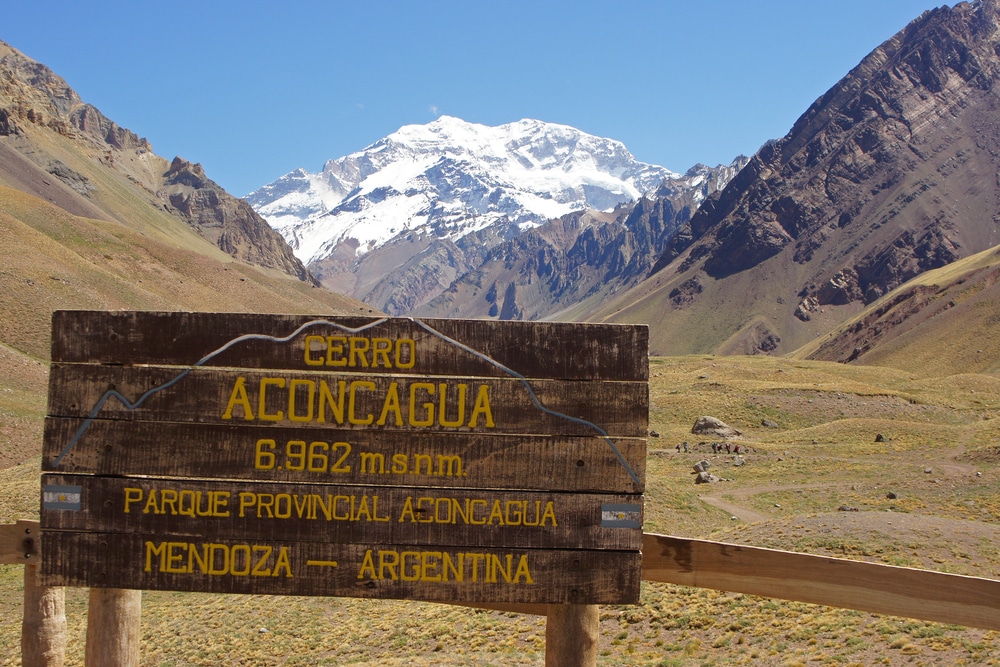 I recently climbed Aconcagua in Argentina, the third step of my journey to climb the seven summits.

Cerro Aconcagua may not be one of the most beautiful mountains in the world and the ascent is certainly short on charm, but this enormous lump of Andean rock and ice is one of the most coveted mountains on the planet.

Every year, thousands of seasoned and amateur mountaineers flock to its slopes to test themselves in one of the harshest environments on the continent.

I spent 14 days on the mountain’s blustery, barren slopes doing just that. Below, I share the most interesting facts about Aconcagua I picked up along the way.

2. What is unquestionable is that Aconcagua is the highest mountain in the Americas, which is why it’s often called the ‘roof of the Americas’.
(Source: Lonely Planet)

3. The above also makes Aconcagua the highest mountain in the Southern Hemisphere, in the Western Hemisphere and outside of Asia.
(Source: Popular Mechanics)

4. Aconcagua is a member of the seven summits, a collection of the highest mountain on each continent. It is the second-highest of the seven after Asia’s Mount Everest.
(Source: Britannica)

5. After Mount Everest, Aconcagua is the world’s highest topographically prominent summit (i.e. the height of the summit relative to the lowest contour line encircling it). This makes it an ultra-prominent peak – notable for its exceptional rise (more than 1,500m/4,900ft) over the surrounding terrain.
(Source: PeakList)

6. As climbing Aconcagua does not require any specialist mountaineering skills, it is considered a non-technical ascent and is the highest trekking peak in the world.
(Source: The Telegraph)

7. There are several theories on the origin of the name based on the local languages. In Mapuche, Aconca-Hue refers to the Aconcagua River and means ‘comes from the other side’; in Quechua, Ackon Cahuak means ‘sentinel of stone’; and in Aymara, Janq’u Q’awa means ‘white ravine’.
(Source: R.W. McColl. (2005). Encyclopedia of World Geography. Facts On File: New York)

8. German explorer Paul Gussfeldt made the first recorded attempt to climb Aconcagua in 1833 getting to within 500m of the summit.
(Source: NASA)

9. The first survey of the mountain was completed by Charles Darwin during the voyages of the Beagle in 1835.
(Source: NASA)

12. At the time, it was the highest peak in the world to have been climbed to date.
(Source: British Mountaineering Council)

14. In December 2019, Czech skyrunner Martin Zhor set a new record for the fastest ascent and descent of Aconcagua. He completed the return trip from base camp in just 3 hours, 38 minutes and 17 seconds.
(Source: Planet Mountain)

15. In 1944, Frenchwoman Adriana Bance became the first woman to summit Aconcagua. Tragically, she and her husband would later die on the mountain.
(Source: Joy Logan. (2011). Aconcagua: The Invention of Mountaineering on America’s Highest Peak. University of Arizona Press: Tucson)

16. In 1947, a British plane rumoured to be carrying Nazi spies and a payload of gold mysteriously disappeared near Aconcagua. In 1999, wreckage was discovered 100km away on a mountain called Tupungato. Despite a massive investigation, the mystery of the gold, spies and a cryptic morse code message sent moments before the crash remains unsolved. Much of wreckage remains hidden in glaciers.
(Source: The Guardian)

17. Aconcagua featured in a 1942 Disney animation called Pedro. Pedro, a ‘baby plane’, nearly crashes into Aconcagua while carrying mail over the Andes while covering for his dad who ‘was laid up with a cold in his cylinder head’.
(Source: IMDB)

18. In January 2009, there were five deaths on Aconcagua in four separate incidents. It’s unusual for so many to die in such a short space of time on Aconcagua and the events sent shockwaves through the local community.
(Source: Outside Magazine)

19. One of those deaths was of Italian Federico Campanini. Controversially, video footage was uploaded online showing a team of rescuers trying to help Campanini. Campanini’s father took the rescuers to court citing they did not do enough for his son. The case was dismissed.
(Source: National Geographic)

20. In 1985, mountaineers discovered mummified remains of a seven-year-old boy on Aconcagua at 5,300m (17,400ft). His body had been wrapped in cloth and was surrounded by six small statues. It is thought the boy was a child sacrifice. During the reign of the Incas, children were sometimes taken to high mountain peaks where they were killed or left to die.
(Source: BBC News)

21. In 2019, Airbus landed an H145 helicopter on the summit of Aconcagua. This was the first time in history a twin-engine helicopter had landed at such an altitude.
(Source: Airbus)

22. The notoriously unpredictable weather on Aconcagua is made worse by the peak’s relative distance from the equator. The further you travel from the equator, the thinner the Earth’s atmosphere becomes. As such, the effects of altitude are more extreme and the weather is more volatile.
(Source: Jim Ryan. (2018). Trekking Aconcagua and the Southern Andes. Cicerone: Kendal)

22. The oldest person to climb Aconcagua was Scott Lewis who reached the summit in 2007 when he was 87 years old.
(Source: Irish Independent)

23. There are no official statistics, but it is thought that over 100 people have died trying to climb Aconcagua.
(Source: BBC News)

24. Finally, one of the most interesting facts about Aconcagua is that depending on the time of year, concurrent winter climbs in the Himalaya and Karakoram ranges of Asia, and given that summit times on Aconcagua typically correspond to night-time in Nepal and Pakistan, when a climber summits Aconcagua, it is likely he or she will briefly be (as I was) the highest person stood on Earth.
(Source: The Independent)