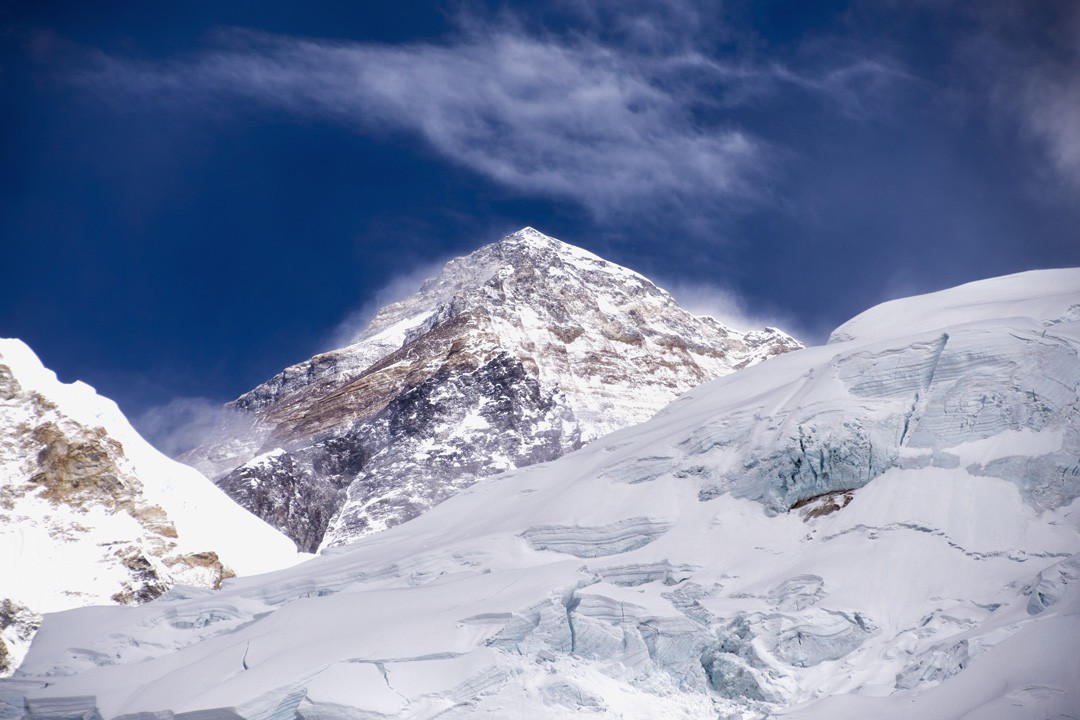 We share the most interesting facts about Mount Everest, gathered over years of reading, writing and dreaming about its slopes

I recently visited Nepal for the first time to complete the Everest base camp trek. One day, I hope to go a step further and climb Everest itself as part of my journey to climb the seven summits.

Until my next summit attempt, I’m focusing on gaining as much climbing experience as possible and absorbing as much information as I can about the infamous peak along the way.

Having captivated the dreams of men and women like me for decades – if not centuries – the highest mountain on Earth has a thousand tales to tell. From record summits to mispronunciations, we take a look at the most interesting facts about Mount Everest.

1. At 8,848m (29,029ft), Mount Everest is the highest mountain on Earth. The summit is just below the cruising height of a jumbo jet aircraft.
(Source: Britannica)

2. The exact elevation of the summit of Everest has been long debated. A number of surveys has been carried out over the years arriving at various heights:

4. Everest is also a member of the seven summits, the highest mountains on every continent.
(Source: Britannica)

5. The mountain was ‘discovered’ as the highest in the world by Radhanath Sikdar in 1852. Sikdar, an Indian, was working in British-ruled India on the Great Trigonometrical Survey. He initially measured the mountain to be 8,840m (29,002ft).
(Source: BBC News)

6. Until then, the unmeasured mountain had been known as Peak XV. It was later named after Sir George Everest, the surveyor general of India.
(Source: BBC News)

7. In all probability, Sir George Everest never once laid eyes on the mountain that was named after him.
(Source: BBC Wales)

8. Everest is widely mispronounced. Sir George’s surname is pronounced ˈiːvrᵻst (Eve-wrist with ‘Eve’ pronounced as in Christmas Eve) while the mountain has long been called Ever-est as in everlasting. Sir George himself opposed naming the mountain ‘Everest’ because it could not be written in Hindi nor pronounced by “the native of India”.
(Source: World Atlas)

9. Mount Everest is known in Nepali as ‘Sagarmatha’ which translates as ‘goddess of the sky’, and in Tibetan as ‘Chomolungma’ meaning ‘Holy Mother’.
(Source: Britannica)

10. One of the most interesting facts about Mount Everest is that it grows by 4mm every year due to shifting tectonic plates.
(Source: The Guardian)

11. The summit of Everest is on the border of Nepal and Tibet (China). Nepal lies to the south and China to the north.
(Source: Google Earth)

12. Everest was formed around 55 million years ago when India’s continental plate crashed into the Asia. The collision was so violent that India’s plate pushed under Asia, raising the land mass upwards and creating the Himalayas.
(Source: National Geographic)

13. The freezing, powerful winds that whip the top of Everest are actually a jet stream, a very cold, fast-moving wind found high in the atmosphere.
(Source: National Geographic)

14. The highest recorded wind speed at the summit of Everest was 175mph (282km/h), recorded in February 2004. As reference, a Category 5 hurricane is defined as having sustained wind speeds greater than 157mph (253km/h).
(Source: Popular Mechanics)

15. The coldest month on Everest is typically January, when the average summit temperature is around -36°C (-33°F). Most climbers summit during May, although ascents do happen during the autumn months and even, occasionally, in winter.
(Source: Mount Everest (2009))

16. The first summit attempt was made in 1921 by a British expedition from the north side.
(Source: History)

17. In 1924, 13 men died on an expedition on Everest. This included George Mallory and Andrew “Sandy” Irvine who famously disappeared during a summit attempt in 1924. Whether they summited or not has remained a mystery although it is widely regarded as unlikely.
(Source: BBC News Magazine)

18. In 1933, David McIntyre and Sir Douglas Douglas-Hamilton became the first people to fly over the summit of Everest.
(Source: The Guardian)

19. The first confirmed successful summit of Everest was on 29th May 1953 by Nepali Tenzing Norgay and New Zealander Edmund Hillary on a British expedition from the south side.
(Source: BBC)

20. Nepali citizen Kami Rita Sherpa holds the record for the highest number of Everest summits. He reached the summit for the 23rd and 24th time in May 2019 at the age of 49, after making his first ascent in 1994.
(Source: Washington Post)

21. There are at least 18 named climbing routes up Everest including a couple that remain unclimbed.
(Source: Outside Magazine)

22. In 1975, Junko Tabei of Japan became the first woman to climb Everest. More than 500 women have since reached the summit including the youngest woman, Malavath Poorna, who was 13 when she summited and Lhakpa Sherp who has summited nine times – more than any other woman.
(Source: National Geographic)

23. Jordan Romero from California is the youngest person to climb Mount Everest. He summitted in 2010 when he was just 13 years and 11 months old.
(Source: The Telegraph)

24. The oldest person to climb Everest is Yuichiro Miura, an 80-year-old Japanese man who completed the feat in 2013.
(Source: The Independent)

28. It takes an average of 39-40 days to climb Mount Everest from its base camp. This does not include the time spent trekking to base camp, which is between 10 to 14 days. The entire expedition takes six to nine weeks.
(Source: Alan Arnette)

30. The deadliest year on Everest was 2015 when 19 people died on the mountain. A devastating 7.8 magnitude earthquake struck Nepal killing nearly 9,000 people and triggering avalanches on Everest. One avalanche swept through base camp killing or injuring dozens of climbers and workers there.
(Source: Britannica)

31. On the summit of Everest there is only a third of the amount of oxygen available at sea level due to the change in atmospheric pressure at that height. Climbers usually use breathing apparatus and bottled oxygen to help them withstand the effects of a diminished oxygen supply.
(Source: CNN)

32. The last 848m stretch of the mountain is known as ‘the death zone’. Above 8,000m, there is not enough available oxygen for humans to survive for long without supplementary oxygen.
(Source: Washington Post)

33. In 1978, Italian climber Reinhold Messner became the first to summit Everest without using supplementary oxygen. In 1980, he also made the first successful solo climb of Everest.
(Source: The Telegraph)

34. There are now ‘flash expeditions’ to the summit of Everest available for those willing to fork out $110,000 USD. Such expeditions make use of altitude simulation tents beforehand to replicate acclimatisation in the mountains and reduce expedition time to as little as 21 days.
(Source: The Telegraph)

35. Finally, although Mount Everest is the highest mountain above sea level, Hawaii’s Mauna Kea is the tallest mountain from base to peak. Mauna Kea lies largely hidden beneath the ocean surface, but is a monumental 10,203m (33,476ft) in height from its submerged base to its peak.
(Source: Guinness World Records)