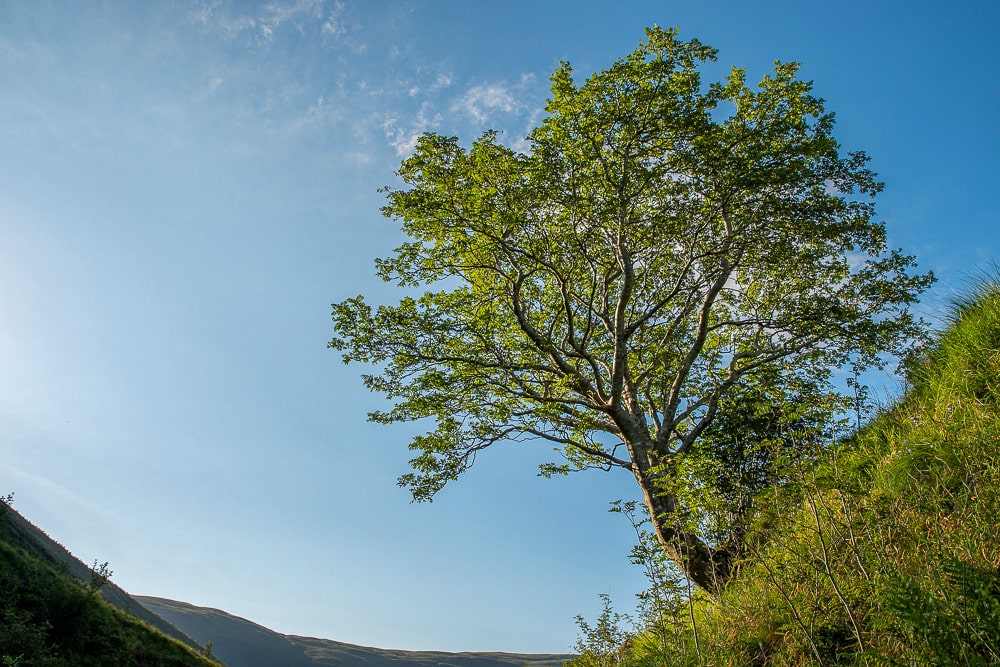 Over the course of the last year, many of us have remembered just how much we depend on nature for quiet, everyday relief. Although some of us joke that when the pandemic is over, we’re “never going for a walk in the park again”, it’s undeniable that these walks have kept us sane.

As an ode to nature, we share below the 20 best trees in Britain.

Selecting the best trees in Britain was not an easy undertaking given the extraordinary breadth of options. We used a scoring system to give the list some structure.

A tree received points for appearing in the following initiatives. All trees had to score 2 or more to be included in our master list.

The best trees in Britain are mapped below. The blue pins show the exact location of a tree while the pink pins show the vicinity; for example, the churchyard in which a tree resides rather than the tree itself.

Twenty years ago, this lonely rowan tree in the Carrifran Valley inspired the Borders Forest Trust’s slogan “where one tree survives, a million trees will grow”. Today, the Survivor Tree is far less lonely.

It is surrounded by an emerging forest of its offspring and, a little further afield, over half a million other native Scottish trees. The hope is that where the Survivor once dominated the view, it will one day be hidden from sight.

This Irish oak tree is thought to be 1,000 years old and reputedly served as a makeshift courthouse in Medieval times. Legend also has it that the tree was damaged in 1864 when the merchant ship Lottie Sleigh exploded on the River Mersey carrying 11 tonnes of gunpowder.

The explosion smashed thousands of windows and reportedly caused the large crack in the trunk of the tree. Despite the damage, it remains one of the best trees in Britain.

Nellie’s Tree is a group of three beech trees that have been grafted together in the shape of an N. As the story goes, nearly 100 years ago, local resident Vic Stead came across three saplings and grafted one between the others to form the letter N in an attempt to impress his sweetheart, Nellie.

The gesture worked and the two went on to marry. Today, Nellie’s tree has become a popular spot for proposals.

The Gillwell Oak stands on the grounds of The Scout Association’s headquarters at Gilwell Park, a former country estate in Epping Forest.

The tree inspired Robert Baden Powell, founder of the Scouting movement, to create “the moral of the acorn and the oak”, an analogy for the growth of the Scout movement worldwide and a lesson to young scouts that small things can grow to be strong and powerful.

The Brimmon Oak is known as the tree that bent a bypass. The 500-year-old tree was scheduled to be felled as part of the construction of the A483 Newtown Bypass in 2015, but the farmer of the land organised a 5,000-signature petition to save it. The petition was successful and the bypass was “bent” to protect the tree and a 15m area around it.

Location: near Hadrian’s Wall, Northumberland
Qualification: England’s Tree of the Year 2016, The Times’ most beautiful trees

The Sycamore Gap Tree sits in a dip by Hadrian’s Wall in Northumberland National Park. In 1991, it appeared in the film Robin Hood: Prince of Thieves starring Kevin Costner, after which it came to be known as the Robin Hood tree. Today, it is one of the most photographed trees in the country.

According to local folklore, Major Oak in Sherwood Forest provided shelter to Robin Hood and his band of Merry Men who slept on its sturdy branches. With a circumference of 10 metres and a spread of 28 metres, Major is one of the largest oaks in the country.

Thanks to its storied history, it has been propped up and supported over the years in an effort to keep it alive and secure its place among the best trees in Britain.

The Fortingall Yew is believed to be the oldest tree in the country with an estimated age of over 3,000 years.

According to the Tree Register: “No one knows exactly how old the oldest tree is but it is generally accepted that it will be one of several ancient yew. Most experts favour the tree in Fortingall churchyard in Perth & Kinross, Scotland.

Estimates begin at about 3,000 years but the tree today is just a couple of fragments, which themselves are much younger. There are several more intact yew in other churchyards that are considered to be over 2,000 years old.

For most, we can only be certain that they are pre-Norman and anything over 1,000 years becomes pure conjecture.”

The Bowthorpe Oak has a girth of 12.8 metres and is considered the largest English oak in the country. Its hollow is so large that in 1768 it was fitted with a floor, benches and a door and used to host parties.

It’s said that 20 people could dine inside it. The original opening has since narrowed.

This 2,500 yew stands close to the River Thames and bore witness to the sealing of the Magna Carta at Runnymede on the opposite bank in 1215. It’s also said that King Henry VIII met Anne Boleyn under the tree in the 1530s. Some reports even suggest that he proposed to her in its shadow.

This famous apple tree grows in the orchard of the 17th-century family home of Sir Isaac Newton. According to the National Trust, this is the very tree from which an apple fell and caused Newton to ask: “Why do apples always fall straight down to the ground?”

This, of course, led to Newton’s law of gravity and the rest as they say is history.

The first Bramley seedling apple tree was grown from pips planted by a young girl in her garden in 1809. In 1856, the son of a local nurseryman was given permission to take graftings from the tree and sell the apples, provided he named them after the tree’s then owner, Matthew Bramley.

There are now 500 Bramley apple growers in the country and the total UK market is worth around £50 million.

With a girth of 14.02m, the Marton Oak is generally considered the largest tree in the country. While today it stands in separate fragments, it’s easy to imagine its size as a complete tree.

Said to be over 1,000 years old, the tree has been used as a bullpen and a pigsty and at one time contained a Wendy house.

The tallest tree in the UK is one of several Douglas fir growing in the Forestry Commission owned Gwydyr Forest in the heart of Snowdonia. There are several trees here over 66m in height and still growing relatively quickly.

When last measured by laser, the tallest was 67.5m. According to the Tree Register, it’s possible that one of the trees will reach 68m this year.

The Majesty Oak has the biggest single, or “maiden”, stem in the country, measuring at 12.5 metres. Other trees have a wider girth but these tend to be a group of smaller stems grafted together to give the impression of a sole stem. The Majesty in contrast truly is a single trunk.

The Great Yew at Crom Castle is actually two yews situated a few steps apart – one male and one female – thought to have been planted together in the 17th century. They have long since grown entwined with a combined circumference of 115 metres.

This extraordinary yew is one of the oldest and best trees in Britain. As with many ancient yews, its trunk has split into several parts but at ground level, where these join, its girth measures at 11 metres.

Despite its huge size it remained unrecorded until 1995 when it was found during a Tree Warden Scheme training day.

According to legend, the devil appears to anyone who dances naked at midnight 12 times anticlockwise around the Big Belly, or Decanter Oak, in Savernake Forest.

This aptly named tree, which bulges into the A346, has a girth of nearly 11 metres and is thought to be about 1,000 years old.

In 1834, six workers who were tired of their meagre pay met under this tree and formed the first trade union in Britain. Before long, the “Tolpuddle Six” were arrested, convicted for belonging to a trade union and deported to Australia.

Protests and petitions followed including a massive march through London and an 800,000-strong petition delivered to Parliament. After three years, the government relented and the men returned to the village with free pardons.

This 3,000-year-old tree grows on what many believe to be a pre-Christian burial mound. Its central stem and the surrounding six diverging stems together measure 12.2 metres in girth, making it England’s largest yew.

Lead image: Tree of the Year