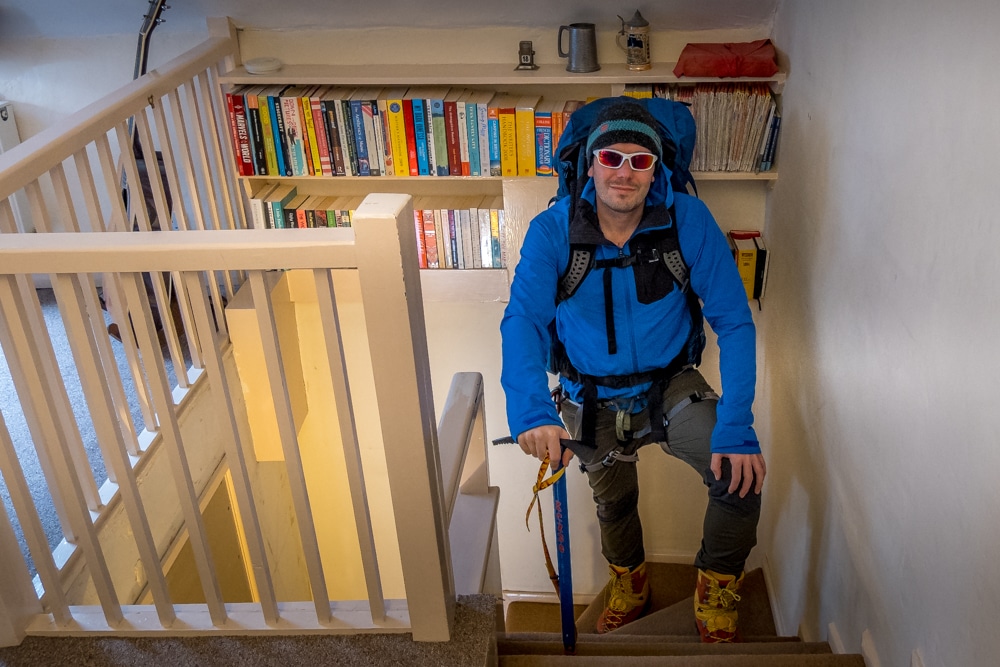 With climbing and mountaineering on hold for the foreseeable future, we find an alternative way to scale the most coveted peaks on the planet

Continuing my search for inside-outdoor activities, I discovered a new way to simultaneously keep myself occupied and fit during these exceptional times: climbing the mountains of the world… using our staircase.

I was recently tagged by a friend in a Facebook post: ‘Peter, I saw this and thought of you. In fact, I thought it WAS you!’ read the comment.

The bored outdoor enthusiast had taken inspiration from a similar challenge and calculated how many stairs in his home he would need to climb to equal the noteworthy peaks of the British Isles.

Equally inspired, I thought I would take the idea a ‘step’ further and extend the formula to the highest mountains of every country in the world as well as the seven summits, eight-thousanders and the UK’s National Three Peaks Challenge.

The possibilities don’t stop there. Ever wanted to earn the Snow Leopard award or conquer the Colorado fourteeners? Dedicated mountaineers can work their way through the Alpine four-thousanders, the seven second summits or simply select from the most beautiful mountains in the world.

The simple formula below can be easily applied to any mountain in the world.

We live in a very old house, so the height of our steps varies from around 17cm to 22cm. A bit of Googling revealed that the standard height of an indoor step in the USA is 7.5 inches (19.05cm) while in the UK, building regulations stipulate that steps must be between 19cm and 22cm.

As such, I decided 20cm per step would be a good median number to settle on, as it essentially means for every five steps I climb, one metre of elevation is gained. Furthermore, I conveniently have 25 steps in my house so I gain five metres of elevation from the bottom of my staircase to the top.

So, with the barriers of time and money removed, I challenge our readers to follow in my footsteps and stay at home to climb the highest mountains in the world. Just don’t wear crampons.

Choose a country of your choice and scale its highest peak.

The seven summits are the seven peaks that make up the highest point on every continent. I’m slowly working my way through the mountains for real and have so far climbed Aconcagua, Elbrus and Kilimanjaro (I don’t count Kosciuszko in Australia).

The eight-thousanders are the 14 mountains on the planet over 8,000m. You’re going to need new carpets after climbing these.

The UK’s National Three Peaks Challenge involves climbing the three highest peaks of Scotland, England and Wales, usually within 24 hours. The mountains can be climbed in any order, but most choose to scale Ben Nevis first, followed by Scafell Pike and then Snowdon.

In a similar vein, Everest England: 29,000 feet in 12 days guides readers on their own own personal Everest by ascending the hand-picked hills of varying size across England.