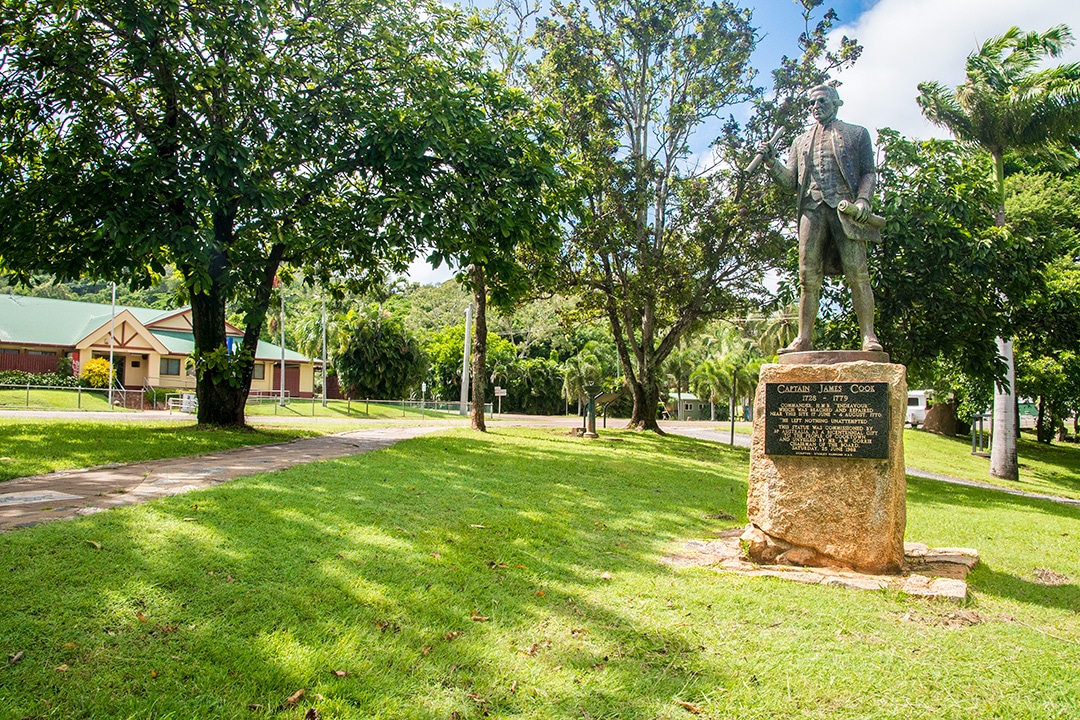 On the southeastern edge of the peninsula with a population of around 2,600 lies Cooktown, a small town with a big history. We stopped off for a morning during our small-ship expedition around the Great Barrier Reef with Coral Expeditions.

As an exploration junkie obsessed with maps, great expeditions and epic journeys of discovery, I was only too pleased to step foot on Cooktown’s legendary land.

Lieutenant James Cook set sail from Plymouth, UK, in 1768 as captain of the HMS Endeavour, a refitted coal ship. It was the first of his now four legendary voyages to the Pacific Ocean. The ship, just under 30m in length, carried 93 men bound for Tahiti. Their mission: to observe the ‘transit of Venus’.

The Endeavour carried further ‘secret’ instructions to take possession of ‘a Continent or Land of great extent’ thought to exist in the southern latitudes. Cook was charged with discovering the fabled – but uncharted – Great Southern Continent.

In October 1769, the Endeavour reached the coastline of New Zealand, becoming the first European vessel to do so since Abel Tasman’s Heemskerck in 1642. The ship continued northwards to what was then known as Terra Australis.

On 29th April, the Endeavour became the first European vessel to make landfall on the east coast of Australia. Cook landed on the southern shore of what is now known as Botany Bay in Sydney.

The Endeavour continued north, sailing along Australia’s eastern coast. The ship and her crew narrowly avoided catastrophe after running aground on the Great Barrier Reef.

After jettisoning guns and supplies to lighten ship, the crew managed to free the Endeavour. Just a week later, they beached the ship at the mouth of what would become the Endeavour River at the site of modern-day Cooktown on 17th June 1770.

Cook and his crew stayed at the site for 48 days while they undertook repairs. Here they encountered the Aboriginal Guugu Yimithirr tribe leading to the first recorded meaningful contact with Australia’s indigenous people.

On 19th July 1770, they began their return journey to the UK, reaching the English port of Dover on 12th July 1771 after almost three years at sea.

Today, Cooktown makes the most of its maritime history with the outstanding James Cook Museum at the centre. Housed in a beautiful 1899-built former convent, the museum showcases well-preserved relics including the cannon and anchor from the Endeavour – recovered in 1969 by an American research team – as well as journal entries and exhibits about the local Indigenous culture.

We spent an hour wandering the rooms of the small museum, enthralled by the stories depicted. The extracts from Cook’s journals are particularly compelling. They describe the first meeting between his crew and the Aboriginal Guugu Yimithirr tribe, as well as the skirmishes and reconciliation before the ship’s departure. There is also an account of Cook’s life in a series of panels around the walls.

Other galleries house objects from the pupils and nuns who once called the convent home, tales from the Palmer gold rush and a display dedicated to the Chinese heritage of the region. The Indigenous Gallery provides a fascinating insight into the culture and history of the Guugu Yimithiir, particularly their perspectives of the encounters with Cook and his crew.

Along the waterfront is Bicentennial Park, dotted with commemorations of the historic landing. These include the much-photographed bronze statue of Captain Cook as well as a second monument erected over a hundred years ago. The tall sandstone column and plaque rise from a square pedestal which incorporates drinking fountains on each side. Out in the water is also a rock marking the spot where the Endeavour ran aground.

Nearby is the Milbi Wall, a 12m-long mosaic installation depicting the history of the local Aboriginal Guugu Yimithirr tribe. Divided into three parts, the installation depicts the creation stories of the Endeavour River and surrounding area, the first meeting between the Aboriginal people of the Cape York Peninsula and the Europeans as well as the 1967 referendum when Australians recognised the rights of Aboriginal people.

It’s also worth stopping by the quaint and charming post office to send a postcard with a Captain Cook (what else!) themed stamp. The post office was founded in 1880 and doubles as the home of the Australian Bureau of Meteorology for the region.

Finally, there is Grassy Hill Lookout, the 162m-high hill that Cook climbed in search of a safe passage through the reefs. It is here where the first recorded European sighting of kangaroos  took place. Scientist Joseph Banks recorded the animals in his journal as ‘gangurru’ which he transcribed as ‘kangaru’. The 360-degree views of the town, river and ocean are well worth the 20-minute walk from town.

We went to Queensland to dive and snorkel the Great Barrier Reef, but  stepping ashore at Cooktown, following in the footsteps of legend, learning about its unique history and strolling the pretty town was a fascinating detour from the rolling Coral Sea.

Where: We stayed in an Upper Deck Stateroom on Coral Expeditions II. Our room was exceedingly comfortable and surprisingly spacious with plenty of storage and stunning sea views.

Pre-dinner drinks were served on the top deck and meals were taken in the lower-deck dining room where chef Mark cooked up feasts for breakfast, lunch and dinner as well as morning and afternoon tea.

The maximum capacity of 44 guests (ours had 22) makes for excellent camaraderie and atmosphere, enhanced further by a delightful crew. Overall, it was a wonderful way to explore the Great Barrier Reef.

When: The best time to visit Cooktown, Queensland and the Great Barrier Reef is Jul-Oct for high visibility and low rain and wind.

How: We joined Coral Expeditions for a 7-night expedition from Cairns to Hinchinbrook Island to Lizard Island and back to Cairns.

Prices starts from $3,680 AUD ($2,720 USD) per person and include all meals, tea and coffee, snorkelling equipment and wetsuits, snorkelling excursions, guided glass bottom boat trips, presentations by marine biologists, access to islands, marine parks and national parks, an introductory scuba skills session for first-time divers and transfer back to a Cairns hotel or Cairns Airport. Prices do not include dives ($80 AUD / $60 USD per person, per dive) or stinger suits. Note that there is no internet access on board.

Expeditions depart from and return to the Cairns Cruise Liner Terminal. You will be given joining instructions prior to departure which are worth reading carefully as taxi drivers won’t always know exactly where to go.

Cairns itself can be reached by car using Hertz Australia, by bus using Greyhound Australia or by flight into Cairns Airport. Book domestic or international flights via Skyscanner for the best prices.

Disclosure: We explored the Great Barrier Reef with support from Coral Expeditions. All publications say this, but we really don’t guarantee positive coverage. We say what we think – good and bad – so you can make informed decisions with honest advice.