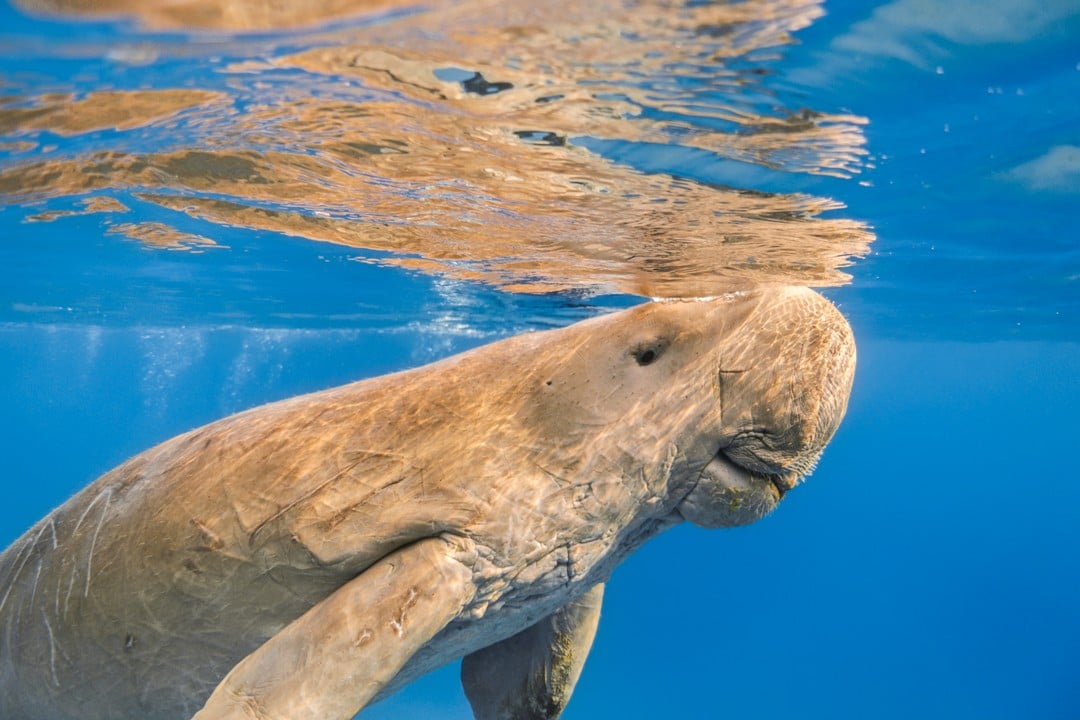 We’ve all seen pictures of the Great Barrier Reef: a pearl-string of reefs and lagoons boasting every imaginable shade of blue. This natural wonder in Australia teems with life.

Marine animals here vary from microscopic plankton to whales weighing 100 tonnes. It is a riot of colour, a carnival of life. Clownfish of bursting orange curl next to fish of luminous blue. It is a true spectacle – but what exactly is the Great Barrier Reef? Is it really bigger than Italy and can it really be seen from space?

We share the most interesting facts about the Great Barrier reef gathered on our small-ship expedition over the course of a week.

1. The Great Barrier Reef is the world’s largest living structure. It is made of 2,900 individual reefs and 900 islands.
(Source: National Geographic, BBC)

3. One of the most delightful interesting facts about the Great Barrier Reef is that astronauts can see it from space.
(Source: NASA)

4. The Great Barrier Reef is one of the seven natural wonders of the world. The others are Aurora Borealis, the Harbour of Rio de Janeiro, the Grand Canyon, Mount Everest, Paricutin volcano and Victoria Falls.
(Source: Guardian)

5. Coral polyps – typically no bigger than a grain of rice – are the basic building blocks of the Great Barrier Reef. These tiny colonial animals contain a symbiotic algae in their cells. As the algae photosynthesise, each fuelled polyp secretes a “house” of calcium carbonate. One house settles on top of another and the colony expands like a city. Other marine animals grab on, helping to cement all the pieces together and thereby grow the reef.
(Link: National Geographic)

6. The Great Barrier Reef is ancient. Parts of it date back as much as 20 million years.
(Source: BBC)

7. Reefs grow only about half an inch (1.3cm) a year.
(Source: National Geographic)

8. The Great Barrier Reef is home to a diverse array of animals including 1,625 species of fish, 1,400 coral reef species, more than 3,000 species of molluscs, six of the world’s seven species of marine turtle, 133 species of sharks and rays and 30 species of whales and dolphins.
(Source: GBRMPA)

9. Dugongs, also known as sea cows, are threatened on a worldwide scale. The Great Barrier Reef has 11,000 of them, making it the world’s largest and most important refuge for dugong.
(Source: GBRMPA, BBC)

10. The Great Barrier Reef is home to the box jellyfish, the most dangerous marine animal to humans. Its sting is so painful, human victims have been known to go into shock and drown or die of heart failure before even reaching shore.
(Source: GBRMPA, National Geographic)

12. One of the most spectacular events to occur on the Great Barrier Reef is the annual synchronised spawning of coral. Resembling an underwater snowstorm, the mass spawning sees colonies of coral polyps simultaneously releasing billions of tiny egg and sperm bundles into the water. This synchrony – which scientists still do not fully understand – is crucial because the “blizzard” makes it more likely that fertilisation will occur.
(Source: GBRMPA, NOAA)

13. The Great Barrier Reef is a huge draw for tourists with around two million visiting every year.
(Source: National Geographic)

14. The Great Barrier Reef has an average depth of 35m in its inshore waters, while on outer reefs, continental slopes extend down to depths of more than 2,000m.
(Source: GBRMPA)

16. One of the less-known interesting facts about the Great Barrier Reef is that it’s home to one of the greatest wildlife wrecks on Earth. The SS Yongala is a 100m passenger ship that sank in the lagoon in 1911 and, located at a depth of 30m, has become a vibrant fish sanctuary as well as a hotspot for divers.
(Source: The Guardian)

17. European exploration of the area began in 1770 when British explorer Captain James Cook ran aground his ship, the Endeavour, on the Great Barrier Reef. After jettisoning guns and supplies to lighten the ship, the crew managed to free it.
(Source: Britannica)

18. One of the more sobering interesting facts about the Great Barrier Reef is that it has suffered a number of mass bleachings, a process which can kill coral. It is caused by a number of factors including climate change, poor water quality, coastal development and overfishing.
(Source: Great Barrier Reef Foundation)

19. In 2016, Outside Magazine ran an obituary for the Great Barrier Reef in an attempt to draw attention to its plight. Scientists said the claims were well meaning but undermined efforts to safeguard the reef including citizen scientist programs, reef conservation projects and sustainable tourism that funds conservation.
(Source: Outside)

What: Visiting the Great Barrier Reef in Australia.

Our Upper Deck Stateroom was exceedingly comfortable and surprisingly spacious with plenty of storage and stunning sea views.

Pre-dinner drinks were served on the top deck and meals were taken in the lower-deck dining room where chef Mark cooked up feasts for breakfast, lunch and dinner as well as morning and afternoon tea.

The maximum capacity of 44 guests (ours had 22) makes for excellent camaraderie and atmosphere, enhanced further by a delightful crew. Overall, it is a wonderful way to explore the Great Barrier Reef.

When: The best time to visit the Great Barrier Reef is Jul-Oct for high visibility and low rain and wind.

How: We joined Coral Expeditions for a 7-night expedition from Cairns to Hinchinbrook Island to Lizard Island and back to Cairns.

Prices starts from $3,680 AUD ($2,720 USD) per person and include all meals, tea and coffee, snorkelling equipment and wetsuits, snorkelling excursions, guided glass bottom boat trips, presentations by marine biologists, access to islands, marine parks and national parks, an introductory scuba skills session for first-time divers and transfer back to a Cairns hotel or Cairns Airport. Prices do not include dives ($80 AUD / $60 USD per person, per dive) or stinger suits. Note that there is no internet access on board.

Expeditions depart from and return to the Cairns Cruise Liner Terminal. You will be given joining instructions prior to departure which are worth reading carefully as taxi drivers won’t always know exactly where to go.

Cairns itself can be reached by car using Hertz Australia, by bus using Greyhound Australia or by flight into Cairns Airport. Book domestic or international flights via Skyscanner for the best prices.

Disclosure: We explored the Great Barrier Reef with support from Coral Expeditions. All publications say this, but we really don’t guarantee positive coverage. We say what we think – good and bad – so you can make informed decisions with honest advice.