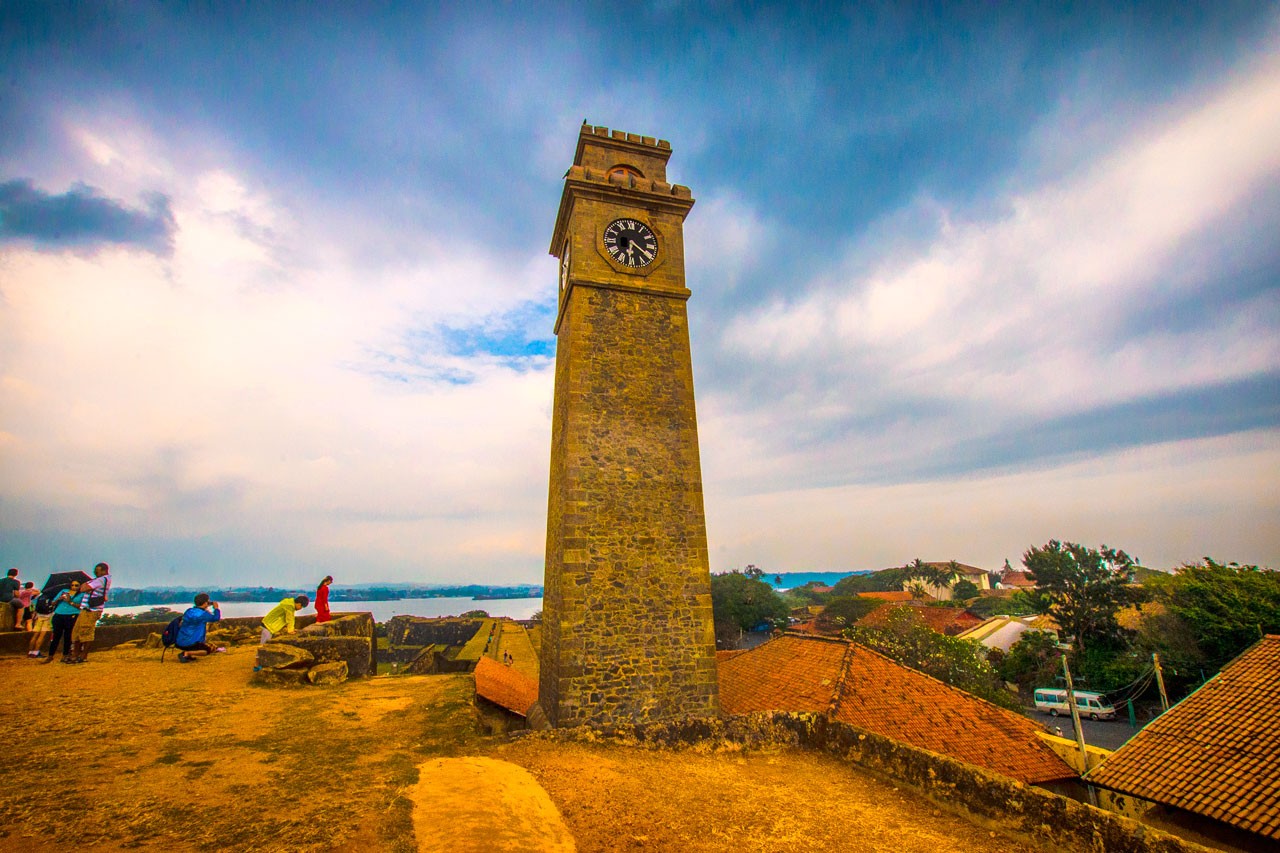 Galle Fort on the southwest coast of Sri Lanka is the unmissable destination of the region. It is easily and best explored on foot. Here’s how

Built by the Portuguese, fortified by the Dutch, modified by the British and restored by the Sri Lankans after the 2004 Boxing Day Tsunami, the UNESCO World Heritage Site of Galle Fort marks out Galle as Sri Lanka’s most intriguing city.

The 36-hectare Galle Fort occupies a promontory surrounded on three sides by the Indian Ocean. It was built first in 1588 by the Portuguese, then extensively fortified by the Dutch from 1649 onwards. When the British arrived at the end of the 18th century, they applied their own touch with the odd lighthouse here and a coat of arms there.

Even after more than 400 years, Galle Fort and its old town maintains a polished appearance. Today, the old town still bustles with boutique shops, cafes, galleries and hotels as well as a working courtroom.

It would be easy to spend several days wandering the old walls and streets at random, stumbling across one architectural surprise after another. However, if you use our tried and tested DIY walking tour below you’ll see a solid cross-section of Galle Fort and its old town in a morning without missing a major site.

Enter Galle Fort through the Clock Tower. Impressively, the tower was constructed in 1883 and still reads the correct time! Do your best to ignore the rickshaw drivers offering overpriced and unnecessary tours.

Turn left and follow the inside of the wall towards the British-built main gate and then continue onwards to Sun Bastion.

Sun Bastion was initially built by the Portuguese in 1620 and named Sao Iago before being renamed Zon (Sun) Bastion by the Dutch in 1667. It offers the best views across the harbour.

Cut inwards onto Church Street and follow the street to the Groote Kerk (Dutch Reformed Church) which was initially built in 1640. The current structure is about a century newer (constructed between 1752-55), but is still one of the oldest Protestant churches in Sri Lanka.

Slightly further down on the opposite side of Church Street at the corner of Queens Street is the Dutch Belfry or bell tower, built in 1701. Behind it is the Marine Archaeological Museum which is arguably more interesting and interactive than the more established Maritime Museum below.

Across the junction from the belfry is the impressive All Saints’ Anglican Church, built from 1868-71. You would be forgiven for thinking you’re in a country village in middle England for a moment!

The Maritime Museum on Queens Street is located in a Dutch warehouse constructed in 1671. The small museum is worth a quick look, particularly as it houses a huge skeleton of a Bryde’s whale. There is also an interesting display on tsunamis.

Just a bit further down Queens Street is the Old Gate with a beautifully carved British coat of arms located on the outer side. On the inside of the gate are the initials VOC which stand for Verenigde Oostindische Compagnie (Dutch East India Company) dating from 1669.

Follow Queens Street out to the outer fort walls on the seafront and turn left to Zwart Bastion. Built by the Portuguese circa 1580, it is believed to be so named because the area was constantly covered by dark smoke emanating from the fires of the nearby smithies.

From now on, follow the fort walls keeping the ocean to your left. As you walk along Hospital Street you’ll pass Court Square and the huge banyan trees. The courts are still active so don’t be surprised to see people milling about nervously awaiting their call.

Continue south along Hospital Street where the colonnaded colonial Dutch Hospital stands. Built in the 18th century the hospital would treat the many Europeans who had been taken ill on the long voyage from Europe to the tropics. Today, there are several cafes and shops occupying the colonnades.

If the heat of the day is starting to get to you, consider a brief dip with the locals at Galle’s best beach.

At the southeastern corner of the fort is the British-built 18-metre high lighthouse. Built in 1938, the lighthouse is still in use today.

Keep following the fort walls along Rampart Street where Meeran Jumma Masjid Mosque is located on the right of the street. Galle is home to a vibrant Muslim community who gather here en masse for Friday prayers. Consider popping to Mama’s Galle Fort restaurant for a tasty plate of rice and curry for lunch.

At the southernmost end of the fort is Flag Rock Bastion where you can see the submerged rocks which have claimed scores of ships over the centuries. It is also the best place to watch the sunset and observe fearless locals leaping from the rocks into the choppy waters.

Head north further along the fort wall on the western edge to Triton Bastion, a quieter spot to watch the sunset.

From Triton Bastion, come off the wall and head down Pedlar Street and consider a quick break for some ice cream at Pedlar’s Inn Gelateria. Turn north onto Parawa Street and then curve west back towards Rampart Street where you’ll see the compact pagoda of Sri Sudharmalaya Buddhist Temple.

Rejoin the fort walls at Neptune Bastion where the surf is noticeably gentler and head northwards.

Another calmer lookout point is Clippenburg Bastion where you may be lucky enough to spot the odd sea turtle in the waters below. There are still remnants of the Lloyd’s Signal Station (owned by the Lloyd’s company) equipment which was installed here.

Keep heading north across the grassy areas where, until recently, Galle’s modern army was based. Today, there’s not much to see and most of the area is cordoned off. However, there is the tomb of Muslim saint Dathini Ziryam located outside the wall.

In the northwestern corner of Galle Fort is Star Bastion where the fortifications were used as slave quarters and a prison. There are still some canons in place along here.

Follow the wall back towards the east where Moon Bastion offers great views of the international cricket stadium to the north as well as across modern Galle. Finish your tour here above the Galle Fort Clock Tower.

What: A DIY walking tour of Galle Fort.

Where: We stayed at South Lake Resort in Koggala which lies 23km east of Galle and offers a calm and charming base from which to visit Galle Fort. The hotel comprises a range of spacious rooms overlooking the lake or garden and is minutes from the beach where local fishermen perch on seaborne stilts.

Other activities in the region include surfing in Kathaluwa and sailing on Koggala Lake. Naturally, you could simply laze on the beach instead or indulge in a treatment at Spa Oya, a slice of calm a boat ride from the hotel.

When: The best time to visit Galle, Koggala and the southern coast of Sri Lanka is December to April when rainfall is low.

How: You can reach Galle by rail from Colombo or Koggala as well as other major bases (check timetable here). There are several daily services from Colombo taking between two and three hours – LKR 340/180/100 for 1st/2nd/3rd class.

There are also several bus services available from Colombo and other major destinations but the train is a far more enjoyable experience. Many choose to take a private transfer from Galle since the expressway has been built linking the two cities. The drive from Colombo is just two hours and, from the airport, 2.5 hours.

You can reach Galle from Koggala by either a 20-minute train ride or 30-minute bus ride. We recommend taking the less stressful and more enjoyable train.

South Lake Resort is a short walk or tuk tuk ride from the train station (1km).

There are various bus routes available depending on your onward destination. It’s worth noting that we found bus travel to be quite stressful in Sri Lanka so you may wish to take a transfer instead. Your hotel can arrange this but it’s always worth negotiating a discount as these are usually inflated (e.g. if quoted 15,000 LKR, ask for 11,000).