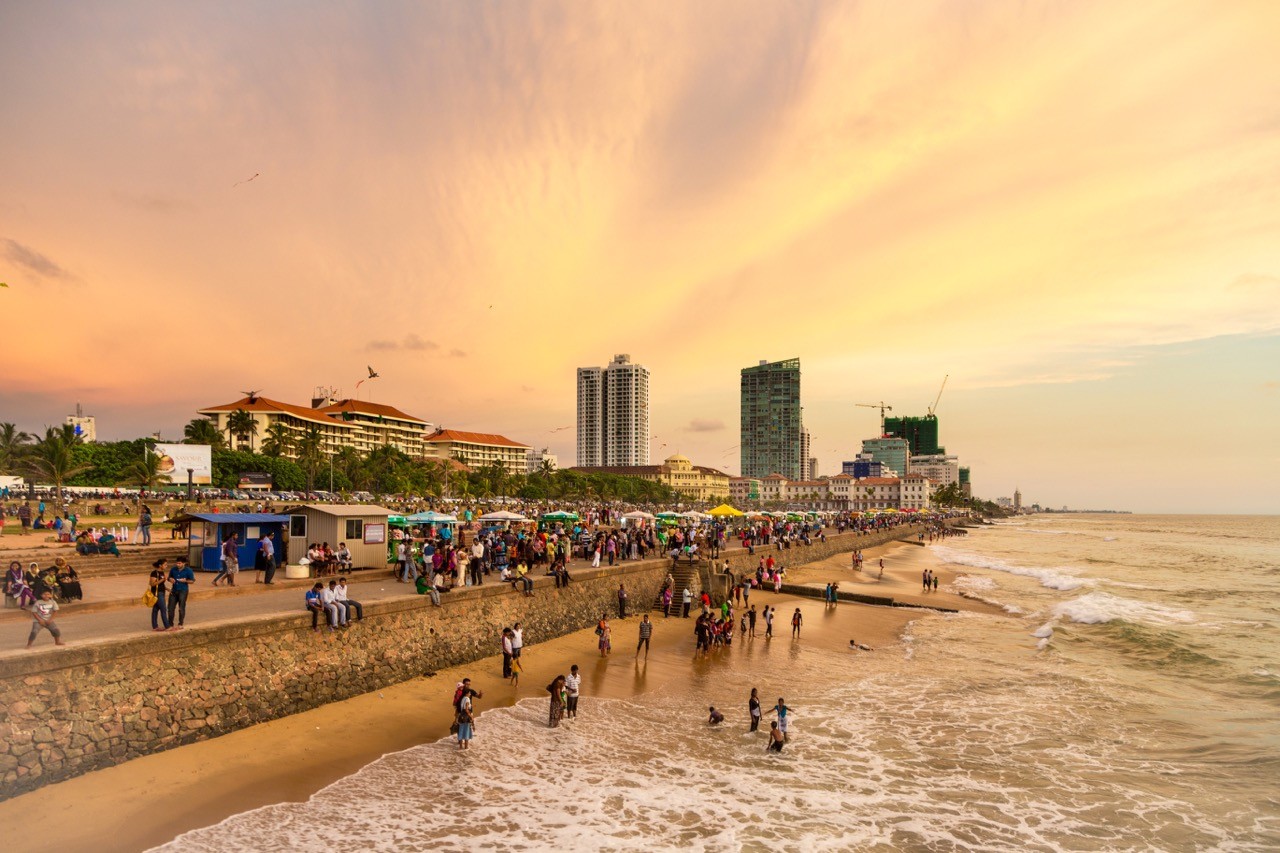 We take a look at the best things to do in Colombo, the gateway city to Sri Lanka – the pearl of the Indian Ocean

Let’s be frank: Colombo isn’t what you would call a ‘world city’. Not many companies boast about offices in ‘London, New York, Colombo’. The city has never been an international player nor does it have a world-class attraction.

Nevertheless, as the launching pad for trips further afield in Sri Lanka, Colombo enjoys a steady footfall throughout the course of the year. Almost every arrival to Sri Lanka will pass through Bandaranaike, the country’s principal international airport. Incidentally, the Sri Lanka visa is widely accessible and can be arranged online via the Sri Lanka visa application form.

Tourists stay mainly for convenience but don’t discount the city altogether. There are numerous interesting and quirky things to do in Colombo that are well worth a stay.

With its relatively diminutive stature, Sri Lanka lies beneath India both literally and metaphorically. The country is less travelled and far less romanticised than its grander cousin to the north. Its food, culture and literature are less renowned, but its history is just as intriguing. From colonisation (first by the Portuguese, then the Dutch, then the British) to a 25-year civil war, Sri Lanka has had its fair share of conflict.

The Colombo National Museum, established in 1977, charts the country’s history with an extraordinary breadth of exhibits from ancient art, carving and statues to artefacts of war from its colonial period.

The main museum is coupled with the fascinating National Museum of Natural History housed in the same complex. This second museum is in a creeping state of disrepair but the dark corridors and peeling walls only add to the atmosphere. We stumbled upon a massive skeleton of indeterminate origin being worked on down a particularly dingy corridor. Try to catch it when you visit.

Colombo isn’t as frenetic as other Asian capitals (Delhi, Bangkok, Phnom Penh), but nor is it a quiet city. Find a spot of calm at Viharamahadevi Park with its trim lawn, leafy trees and sizeable Buddha statue.

The park is Colombo’s oldest and largest, and was formerly known as Victoria Park named after Britain’s Queen Victoria. It was renamed in the 1950s to honour the mother of King Dutugemunu, the Sinhalese king of Sri Lanka who reigned from 161 BC to 137 BC.

Today, the park provides the perfect spot from which to watch ambling locals, tired tourists and even a wedding party or two.

The Fort area is touted as Colombo’s trendy quarter with a host of modern tea lounges, eateries and cafes. While it’s not exactly Soho, the area is certainly worth a stroll.

Fort’s centrepiece is the Old Dutch Hospital which dates back to the early 1600s. First built as a hospital, the complex was later used as a police station and is now a noted heritage building.

Wander its arcade of chunky columns and take pause in its quiet courtyard ringed with cafes and restaurants. For a refreshing tea, try T-Lounge on Chatham Street round the corner.

Galle Face Green is a promenade that stretches for half a kilometre along Colombo’s coastline. The area was originally cleared by the Dutch to give their canons a clear line of fire.

Today, the grass bordering the beach is somewhat worn and the area could do with a sprucing, but it does provide an insight into life in Colombo. Visit on a weekend and you’ll find the area filled with locals: families enjoying a day out, courting couples on unhurried walks, joggers dodging crowds and food vendors out in force.

For an insight into local trade, head to Pettah with its cluster of local markets. Be warned though: it’s loud and crowded and if you don’t love it, you’ll probably hate it.

Try to visit the Federation of Self Employees Market along 5th Cross St for household goods and food, or Manning Market for fruit and veg. If you’re serious about shopping, pick up some Tamil beforehand. Sinhalese will do but you’ll endear yourself using Tamil as it’s the first language of many Pettah vendors.

Beira Lake sits in the centre of Colombo. Though surrounded by buildings and businesses, its walkways offer a ribbon of calm. Stroll in the shade of swaying trees, paddle out onto the lake on a swan boat (cheesy but fun) and cross the bridge to lovers’ island.

Take the time to visit the Seema Malakaya Meditation Centre on the east side of the lake. Designed by renowned Sri Lankan architect Geoffrey Bawa in 1985, the centre comprises three picturesque platforms adorned with bronze Buddhas and bodhi trees. The centre is especially striking when lit up at night.

This Buddhist temple feels rather piecemeal with different sections and styles meshed together without much thought of harmony. With that said, its nooks and crannies offer a host of interesting artefacts and insights.

Spend some time exploring the second level and you’ll happen across an impressive display of Buddha statues. Consider visiting at dusk so you can see the statues illuminated.

It’s worth noting that we retrospectively learned of a lonely elephant called Ganga permanently chained at the complex. We saw no sign of Ganga but have been unable to confirm that she has been freed. Please enquire with your hotel before visiting.

Update 2nd Feb 2017: We have been told by a local conservationist and former Born Free employee that Ganga is still captive at the temple and hidden out of sight. We hope you can make a considered decision based on this information.

This colonnaded building in Pettah was the formal residence of the Governor of Dutch Ceylon, Thomas van Rhee, during his term of office in 1692 to 1697. It has since taken several guises including a Catholic seminary, a military hospital, a police station, a post office and now a museum charting the history of Dutch colonial rule in Sri Lanka.

Artefacts include furniture, ceramics, coins and weaponry while a garden courtyard provides a pretty spot in which to rest before re-entering the fray of the capital.

Things to do in Colombo: the essentials

What: Exploring Colombo in Sri Lanka.

Where: We stayed at Taru Villas Lake Lodge, a boutique hotel with 12 stylish double rooms and a garden suite. Located a short tuk tuk ride from the centre of town, Lake Lodge is bordered by a makeshift cricket field and Beira Lake.

We turned up at 1am after an excruciatingly long stopover in Dubai and received a warm welcome and cool drink from Seelan and Raj. Seelan looked after us for the duration of our three-night stay, offering a rare personal service.

Our room was clean and comfortable. The piece de resistance, however, was the restaurant. Lake Lodge offered the best food we’ve had in Sri Lanka. Don’t miss the rice and curry option which comes with lashings of piping rice, an aubergine curry, breadfruit curry, beetroot curry, poppadoms, sambols, a fish dish and the best dahl we’ve ever tasted. There was so much food, they had to block the aisle with an extra table for us! Highly recommended.

When: The best time to visit Colombo is January to March when the city is mostly sunny. With April comes the monsoon season. June to September are the wettest months but are still sunny. In November, the weather turns hot and humid but it’s still a good time to visit especially for Diwali celebrations.

How: We took a transfer from Bandaranaike International Airport to Lake Lodge (did we mention it was 1am?). Kangaroo Cabs is a reputable taxi company and has deals starting from 1750 LKR ($12 USD) from the airport to Colombo.

You can take the public bus (number 187-E3) from the airport to Colombo central bus station. Do note that we found public bus travel to be fairly stressful in Sri Lanka.

You can also take a train from Katunayaka station to Fort station in central Colombo. You will have to take the airport shuttle to the bus station and then a tuk tuk to Katunayaka. The trains run approximately one per hour and take an hour to reach Fort.