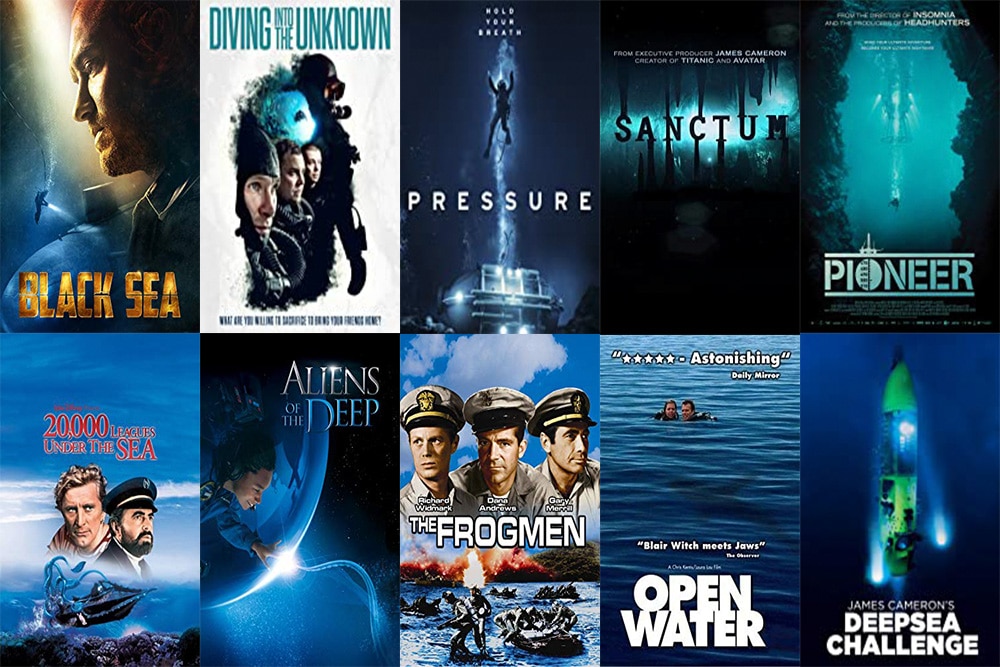 Sadly, the underwater realm has struggled to get a foothold in the glitz, glamour and special effects of the modern Hollywood blockbuster.

This may be because scuba diving movies are more costly to film and tend to be more sink than swim. Far too many have been box office bellyflops, receiving a rotten green splat as opposed to a fresh red rating on Rotten Tomatoes.

However, this hasn’t put us off. Below, we explore the best scuba diving movies of all time (even though they may not always measure up to non-diving alternatives). The list is an eclectic mix of movies from the archives of Hollywood that feature, in one way or another, the underwater world.

Here are our best scuba diving movies of all time, ranked in no particular order.

1. The Abyss (1989)
An epic adventure film thrusting a team of civilian divers and Navy SEALs to the bottom of the Atlantic Ocean in a search-and-rescue mission for a sunken nuclear submarine.

2. Le Grand Blue (The Big Blue) (1988)
The rivalry between Enzo and Jacques, two childhood friends and now world-renowned free divers, becomes a beautiful and perilous journey into the unknown.

3. The Deep (1977)
Deep-sea divers vie with a Haitian drug dealer to recover a trunkload of sunken morphine. Based on Peter Benchley’s best-selling novel of the same name.

4. Deepsea Challenge 3D (2014)
In James Cameron’s dramatic fulfilment of a childhood dream, he pilots a submersible he designed on a dive 11km (7mi) beneath the ocean surface. Visually one of the best diving movies ever made, the film is a celebration of science, courage and human aspiration.

6. The Frogmen (1951)
The new commander of a Navy Underwater Demolition Team – nicknamed Frogmen – must earn the respect of the men in his unit, who are still grieving over the death of their former commander.

7. Men of Honor (2000)
When the son of a Kentucky sharecropper joins the newly-integrated Navy, his tough-as-nails training officer wants no part in his ambitions. Inspired by the true story of the first African American master diver in the US Navy.

8. 20,000 Leagues Under the Sea (1954)
A classic film based on a classic book and the first science-fiction film shot in CinemaScope. A ship sent to investigate a wave of mysterious sinkings encounters the advanced submarine, the Nautilus, commanded by Captain Nemo.

9. Blue Water, White Death (1971)
Peter Gimbel and a team of photographers set out to find and film, for the first time, the Great White Shark. The expedition took over nine months and travelled from South Africa, across the Indian Ocean, to South Australia.

10. Amsterdamned (1988)
A mysterious diver hiding in Amsterdam’s canal system embarks on a rampage of gruesome murders, leaving few clues for the city’s best detective. As the body count begins to rise, the detective’s daughter unwisely tries to track down the killer.

11. Open Water (2003)
Based on the true story of two scuba divers accidentally stranded in shark-infested waters after their tour boat has left. What follows is a reminder to us about how much ‘fun’ it is to be frightened by our most primal fears – namely what we think may linger just below the surface.

12. Pioneer (Pionér) (2013)
Set at the beginning of the Norwegian oil boom, authorities aim to bring the 500m deep oil ashore. Petter and his brother, Knut, have the courage to take on the mission, but a tragic accident occurs.

13. Pressure (2015)
Four deep-sea divers become trapped in their saturation bell at the bottom of the ocean off the Kenyan coast. After their boat sinks during a storm, the survivors must figure out how to reach the surface before they run out of air.

14. Black Sea (2014)
A rogue submarine captain (Jude Law) and a misfit crew go after a rumoured sunken treasure, but greed soon turns the men on each other in this suspenseful adventure thriller.

15. Diving into the Unknown (Takaisin pintaan) (2016)
After a terrible accident deep inside an underwater cave, the survivors are forced to risk their own lives to bring the bodies of their friends home. Deeply claustrophobic and unnerving.

16. Aliens of the Deep (2005)
James Cameron teams up with NASA scientists in this documentary to explore the Mid-Ocean Ridge, a submerged chain of mountains that band the Earth and are home to some of the planet’s most unique life forms.

17. Sanctum (2011)
A team of cave divers embark on a deadly expedition to the world’s largest, but least accessible cave system. When a storm forces them deep into the caverns, they must fight raging water, deadly terrain and creeping panic to escape.

18. Ocean Men: Extreme Dive (2001)
Join freedivers Pipin Ferreras and Umberto Pelizzari on a journey into the deep blue world through the use of breathtaking underwater photography and insightful animation.

19. Ray: A Life Underwater (2011)
A documentary about a rogue with an eye for salvage – and the ladies. The short film is an affectionate portrait of one man’s deep-sea diving career, told through his extraordinary collection of marine artefacts.

20. Lady in Cement (1968)
During an ocean dive, Miami detective Tony Rome (Frank Sinatra) finds a woman’s body with its feet encased in a concrete block and sets out to solve the murder case.

21. The Dive (Dykket) (1989)
A Norwegian deep diver has 524 diving operations in the North Sea under his belt and is planning his retirement when he’s persuaded to do one last lucrative but risky job.

22. Last Breath (2019)
The true story of a deep-sea diver stranded on the North Sea seabed in 2012. Diver Chris Lemons accidentally severs his umbilical cable and is trapped 100m below the surface with only a small amount of air in his backup tank.

23. Chasing Coral (2017)
Coral reefs around the world are vanishing at an unprecedented rate. In Chasing Coral, a team of divers, photographers and scientists set out on a thrilling ocean adventure to discover why and to reveal the underwater mystery to the world.

Here’s what our readers have added to our list of the best scuba diving movies.

*Jaws (1975) gets an honorary mention. Even though the underwater scenes were pretty thin on the ground, this is one of the most iconic movies ever to take place on or below water.