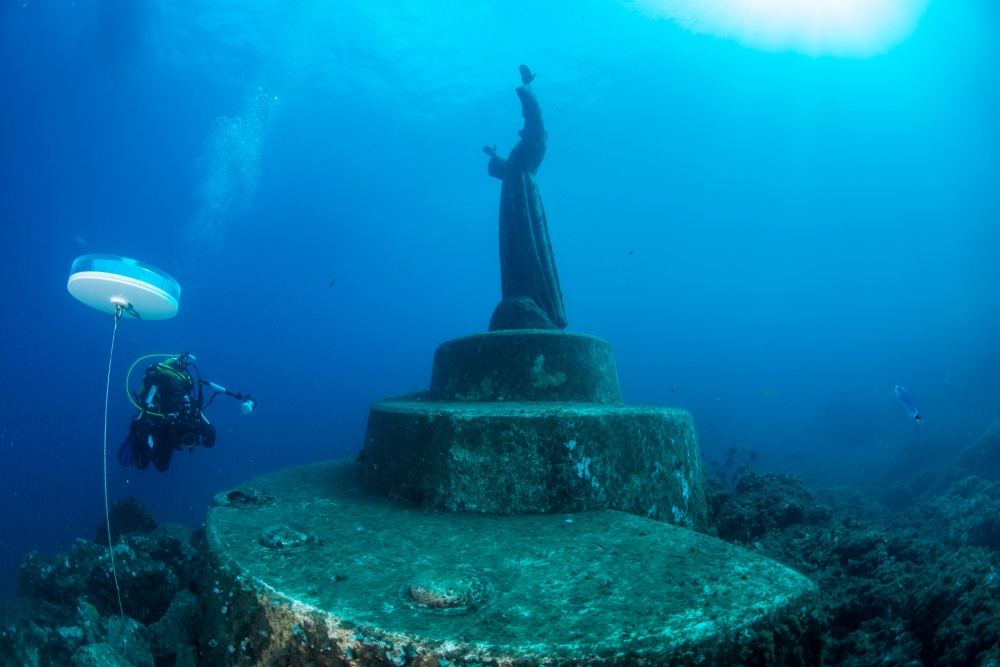 If you’ve ever dreamed of discovering the mysterious lost city of Atlantis, then these dive sites are sure to intrigue

Man was designed to walk on land, but these underwater worlds suggest an alternative reality. From historic cities that have crashed into the sea at the hands of nature to artificial scenes constructed beneath the sea, these surreal man-made dive sites are utterly fascinating.

To the west of Naples lies the Underwater Archaeological Park of Baia, one of the world’s few underwater archaeological parks. Visitors can dive among a slew of old statues from Baia, a Roman resort city which for centuries catered to the recreational whims of the rich and powerful Roman elite.

However, the hedonism didn’t last as invading Saracens sacked the city in the 8th century. By the 16th century the remains of the formerly luxurious town had been abandoned and eventually gave way to the sea.

The self-proclaimed ‘world’s first underwater sculpture gallery‘ was created by British sculptor Jason deCaires Taylor. It features exhibitions of cement figures installed on the ocean floor, from solitary individuals to a ring of children holding hands.

The sculptures are situated at a variety of depths with the deepest at 12 meters. Tourists are encouraged to visit the park as it diverts divers and snorkellers from popular natural reefs, allowing time for repair and regeneration.

Around sunrise on 21st July 365AD there was a cataclysmic earthquake around the Greek island of Crete. A tsunami followed and Alexandria’s Portus Magnus and the cities of Herakleion and Canopus in Aboukir Bay were all but destroyed.

In 1992 a research and excavation project began to determine the ancient location of the submerged ancient zones and continues today. Recreational divers can apply for a special permit to join in.

In 2009, a monumental underwater contemporary museum of art called MUSA (Museo Subacuático de Arte) was formed in the waters surrounding Cancun in Mexico.

The project comprises over 500 permanent life-size sculptures and is one of the world’s largest underwater artificial art attractions. There are two galleries to explore. The first is eight meters deep and suitable for both divers and snorkellers and the second four meters deep and only for snorkelling.

The Yonaguni Monument is within a submerged rock formation off the coast of Yonaguni in Okinawa, Japan. The site’s origins have inspired some debate: some claim the structures are man-made stepped monoliths, others say they are completely natural while a third group claims it’s a natural site that has been modified by man.

Either way, the mystery only adds to the site’s uncannily angular appearance.

6. Christ of the Abyss, Italy

A 2.5-metre tall bronze statue of Jesus Christ was purposely submerged off the coast of San Fruttuoso, Italy in 1954. Lying 17 metres below the surface, the statue was sculpted by Guido Galletti and is placed near the spot where Dario Gonzatti, the first Italian to use SCUBA gear, died in 1947.

It depicts Christ offering a benediction of peace with his head and hands raised skyward. There are two replicas also placed underwater, the first in Grenada in 1961 and the second off the coast of Florida, USA, in 1962.

The world’s only underwater post box is located off the island of Efate in Vanuatu. This undersea branch of the Vanuatu Post Office allows visitors to mail special waterproof postcards by swimming down and dropping them into the mailbox.

The post office is only three meters underwater, so is accessible to swimmers and snorkellers as well as divers.

Known as the wickedest city on Earth throughout the 17th century, Port Royal played host to pirates from all around the world, some coming from waters as far away as Madagascar in the Indian Ocean.

Pirates congregated at the Caribbean port thanks to its coma-inducing rum, readily available prostitution and its reputation as a relative safe haven from patrolling European warships.

On June 7, 1692, a devastating earthquake and tsunami hit the city causing most of its northern section to collapse into the sea. Today, divers can explore the relics of the ungodly city, now a National Heritage Site that’s been compared to Pompeii for its archaeological wonders.

Unfortunately for the recreational diver, special access from the government is required to dive in the restricted Port Royal ruins area.

The ancient city of Dwarka was largely assumed to be a myth. However, in 2000, ruins were discovered in the Gulf of Cambay which reignited the debate. Legend has it that Lord Krishna ruled over the splendid city of Dwarka, comprising hundreds – possibly thousands – of palaces built of gold and silver.

Upon Krishna’s death, Dwarka supposedly sank into the sea. The ruins are nearly 40 meters below the surface in the bay of modern-day Dwarka, one of the seven oldest cities in India. Artefacts dated to 7,500 BCE have been recovered, supporting the theory that the ruins may well be the ancient Dwarka.

Neptune is a rather unusual memorial concept located off the coast of Florida where cremated human remains are mixed with cement to form the features of an artificial reef.

Originally conceived as an artistic interpretation of the Lost City of Atlantis, the site is open to families to dive and visit their entombed loved ones. The site is also open to curious recreational divers.

The memorial is located 12 metres below the surface and includes underwater roadways leading to a central feature with benches and statues. Only in America, eh?

We’ve saved the best to last: China’s Lion City has been hailed as the most spectacular underwater city in the world. It is also the only freshwater dive site on the list.

Built in the Eastern Han Dynasty circa 25-200AD, the Lion City can now be found 26 to 40 meters beneath the surface of Thousand Island Lake, an area that was intentionally flooded in the 1950s to create a dam. Currently, Shi Cheng remains undisturbed but there is one dive company that runs trips twice a month to Qiandao Lake and has begun exploring of this submerged city.

A Chinese-Italian consortium has also started to prototype a submerged floating tunnel across the lake. Only in China, eh?