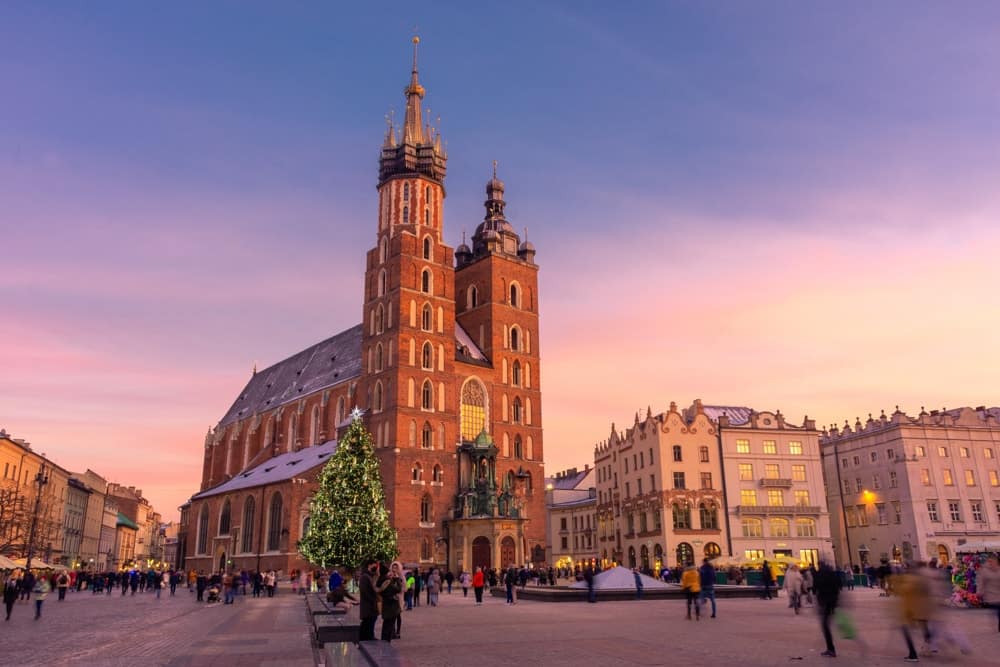 Kraków was Poland’s only major city to escape World War II virtually undamaged. Since then, the assembly of monuments and architecture that makes up its Old Town was quite rightly celebrated by UNESCO as one of the 12 original World Heritage sites first listed in 1978.

We spent three days exploring the enchanting city centre. Below, we share a curated DIY walking tour to help you get the most out of Kraków’s Old Town.

MAP of the Old Town

Use the map below to follow our DIY walking tour of Kraków Old Town. The duration of the tour will depend on how many museums and galleries you choose to visit en route.

Spend your morning at Rynek Główny (Main Square), Europe’s largest medieval town square. Begin at the striking brick church of St. Mary’s Basilica. The first church here was built in the 13th century and following its sacking during a Tatar raid, construction of today’s two-tower basilica began with various façades added over the ensuing centuries.

Every hour, on the hour, a bugle player appears at the windows of the taller tower to play the hejnał (St. Mary’s Trumpet Call) in each cardinal direction. The noon hejnał is broadcast via radio to all of Poland.

The elaborate interior of St. Mary’s Basilica is worth exploring and it’s also possible to climb both towers. If you want to ascend either the Bugle or Bell Tower, pre-book via the church website.

After leaving St. Mary’s, spend some time wandering the 200m by 200m main square which is the focus of the Old Town. It might be a good time to pause at one of the restaurants or cafés for a coffee and do some people-watching.

The square’s centrepiece is the 16th-century Cloth Hall while other prominent landmarks include the 15th-century Town Hall Tower (we’ll get to that), the impressive bronze statue of Polish 19th-century romantic poet Adam Mickiewicz and, of course, the two towers of St. Mary’s Basilica.

In the southwest quarter of the square is the soaring Town Hall Tower. It is all that remains of the 15th-century town hall which was dismantled in the 1820s. The 70m-tall tower slants 55cm to one side, hence the moniker ‘the Leaning Tower of Kraków’.

The tower can be climbed during the spring and summer months, but unlike St. Mary’s there is no need to book. Technically a museum, the tower has a number of historical and cultural exhibits that can be seen on the way up to the enclosed viewing platform.

Cloth Hall was once the seat of Kraków’s medieval clothing trade and dominates the centre of Rynek Główny. First constructed in the 14th century – merely a roof positioned over two adjacent rows of stalls – Cloth Hall was later extended into a 108m-long Gothic structure. Following a fire in 1555, it was rebuilt in the Renaissance style you see today. The arcades were then added in the late 19th century.

The engrossing Rynek Underground Museum is located four metres under the surface of the market square and consists of underground tunnels through recently excavated medieval market stalls, alcoves and long-forgotten compartments. There are holograms and short films among other audiovisual installations throughout the tour.

Tickets are necessary as it’s a popular site. Scheduled tour times are displayed on an electronic board in the ticket office. We suggest organising tours the day before either through the ticket office or online.

We recommend pausing for lunch (or cake) at Szał Cafe on the rooftop of the Sukiennice. Coffee and cake were just what we needed to re-energise for the afternoon, but really it’s the view of the square that’s the main draw.

We went for cake and coffee at Szał

If you get your timing right you can watch – and listen to – the bugle player making their appearance from St. Mary’s which is just opposite. The entrance is shared with the National Museum so it’s a little tricky to find. Follow these instructions.

It’s time to move on from the main square and explore the outer boundaries of the Old Town. In the northeast corner of the square, cobbled Floriańska Street with its boutique shops, artisan cafés and chocolate-box façades leads away from the square towards St. Florian’s.

The street may be touristy – the corporate logos of Starbucks and KFC can be spotted – but efforts have been made to keep it as traditional as possible and the buildings’ original Gothic architecture has largely been maintained. It is one of Kraków’s prettiest streets and home to the city’s oldest restaurant, Jama Michalika, which opened in 1895.

The imposing stone gateway at the end of Floriańska Street is the only one of the city’s eight original gates that was not demolished during a period of modernisation in the 19th century.

Built during the 14th century, St. Florian’s Gate’s stout tower and adjoining walls formed part of the city’s fortifications against a potential Tatar attack. The gate was connected by a long narrow bridge to the circular Barbican built of brick on the opposite side of the moat (see below).

The gate along with the Barbican forms part of a museum called the City Defence Walls. One admission ticket covers entry to both sites.

Another, more striking, element of Kraków’s medieval fortifications is the circular red brick Barbican bastion with its seven turrets and ornate Arabesque battlements. In total, there are 130 loopholes (or embrasures) lining its three-metre-thick walls.

Constructed in 1498, the unique outpost was designed to further protect St. Florian’s Gate and serve as a checkpoint for those entering the city.

From the Barbican, head east through the leafy Planty Park which roughly traces the path of the city’s medieval moat encircling the Old Town. The park is alive with everyone from city workers on their breaks to retirees meeting for a game of chess and a chinwag. Its wide paths are also regularly lapped by dogwalkers, joggers, cyclists and the occasional rollerblader.

Despite its popularity, the park remains peaceful and offers respite from the busy streets found on both sides. Keep the Old Town on your right and head towards the Wawel Hill complex. En route, you’ll pass ponds, cafés, floral displays and statues dedicated to Polish intelligentsia.

About halfway around Planty Park, you’ll exit the leafy footpaths and join Podzamcze Street. Here, the iconic three towers (Sigismund, Clock and Silver Bell) and the gilded dome (Sigismund Chapel) of Wawel Cathedral rise up from Wawel Hill, the castle complex that was once the seat of the Polish monarchy.

The original cathedral was constructed in 1020, but the present basilica was consecrated in 1364 and contains a crypt that holds the majority of Poland’s 45 monarchs.

Highlights of a visit include climbing the 70 steps of Sigismund Tower to see the Sigismund Bell, and exploring the bewildering assortment of sarcophagi, headstones and altarpieces spread throughout the basilica’s chapels and crypts. While entrance to the grounds and cathedral is free, you’ll need to purchase tickets for the Royal Crypts and Sigismund Bell.

For over 500 years, from the 11th to the 16th century, Wawel Royal Castle was the seat of Poland’s monarchy. Despite being repeatedly sacked and damaged by the Prussian and Swedish raids, restoration work was frequently carried out from the 19th century onwards.

Today, the castle is a museum consisting of five permanent exhibitions: the Crown Treasury and Armoury which includes the Szczerbiec, the country’s original coronation sword; the State Rooms furnished with Renaissance paintings and tapestries; the Royal Private Apartments featuring the opulent private chambers of the king and queen; Lost Wawel showcasing archaeological excavations; and the Exhibition of Oriental Art. All require separate tickets which are limited, but wandering the grounds is free.

If it’s a hot day, you’ll be glad to duck into the cool and dark interior of St. Francis’ Basilica. Although not as imposing or ornate as many of the other historical sites on this tour, St. Francis is worthy of a quick visit if only to admire its exquisite art nouveau stained-glass windows.

Once inside, head straight to the multicoloured masterpiece installed above the organ. Entrance is free, but the basilica is closed during mass.

The penultimate stop on our Kraków Old Town DIY walking tour is Collegium Maius, the oldest surviving university building in Poland. It is yet another fine example of the city’s wealth of 15th-century Gothic architecture. Among the famous alumni is Copernicus, the Renaissance astronomer and mathematician who revolutionised European ideas about the universe.

It’s free to wander about the arched courtyard, but there are also guided tours around the interior which must be booked in advance. If you visit the courtyard at 9am, 11am, 1pm or 3pm, a 14th-century replica clock chimes and a troupe of medieval characters appear.

We recommend rounding out your day with a gourmet meal at Brasserie L`Olympique in H15 Hotel Francuski. Dating from 1912, Olympique is a cute patisserie and café by day and classic French restaurant by night.

While Polish food is heart-warming, its best dishes are not particularly vegetarian-friendly. As such, we didn’t feel guilty opting for the French-inspired menu at Olympique, especially when it turned out to be the best meal we ate in Poland.

We recommend the double-baked souffle for a starter, the caramelised shallot and goat’s cheese tart for a main and the delicious dark chocolate fondant for dessert.

What: A DIY walking tour of Kraków Old Town in Poland.

Where: We stayed at the glorious H15 Luxury Palace located right in the heart of Kraków’s Old Town, just 200m from Rynek Główny (Central Square). The chic hotel is built into the 16th-century Lubomirski Palace, which at one point was the only hotel in Poland.

The elegant rooms have air-conditioning, a coffee machine, a minibar, a safe and an enormous flat-screen TV. The hotel also features a bar, garden and breakfast area with buffet and à la carte options.

After exploring the city, we spent our afternoons in the luxurious spa, swimming pool, hot tub and sauna before sprucing up for dinner just over the road at Brasserie L`Olympique.

When: The best time to visit Kraków is during the warmer and drier summer months of June to August. However, to avoid the summer crowds, visit in the shoulder seasons of spring (March to April) and autumn (September to October).

How: We visited Kraków by train as part of our Interrail Global Pass. After meeting up in Warsaw, Kia and I went on to cover over 3,000km by rail, visiting seven countries en route to San Marino. Established in 1972, Interrail just celebrated its 50th anniversary and recently launched several initiatives including its Mobile Pass and Rail Planner app, both of which made travelling easier.

Global passes start from €503, include one month of unlimited train travel across 33 European countries and are valid for 11 months from the date of issue. Some reservation fees are charged by the national railway companies. It’s recommended to book seat reservations at least 4-6 weeks in advance. Learn more about Interrail mobile passes.

In Poland, we stayed online with a Keepgo Lifetime World LTE SIM Card, which connects to local 4G networks in over 100 countries. You can get 10% off any Keepgo product using this referral link.