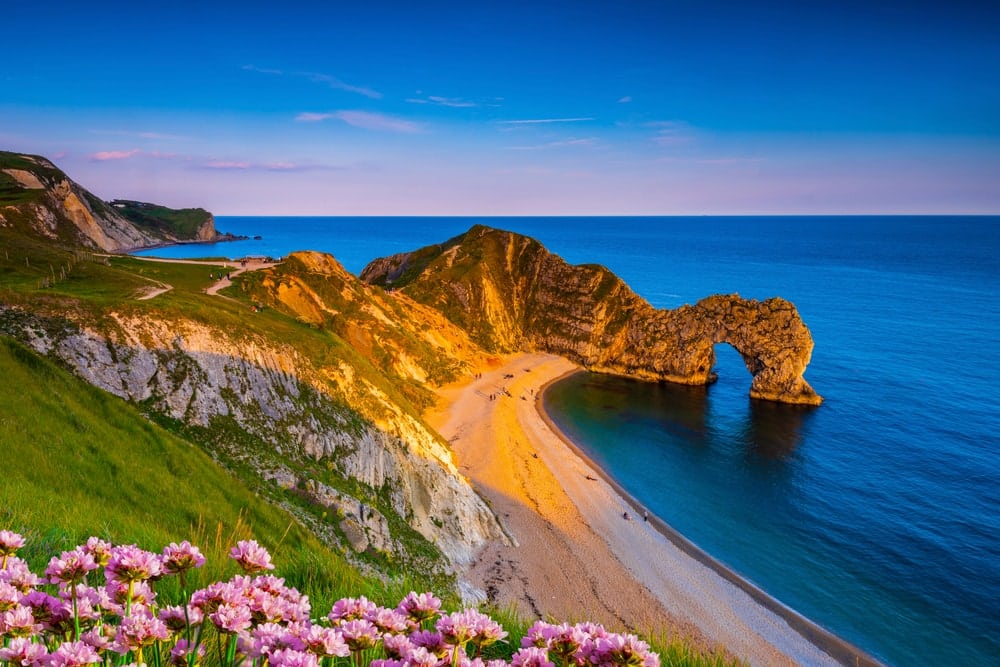 From brooding cliffs to storybook villages, we bring you a curated list of the best sea views in England

For a long time, Peter and I were ambivalent about the British staycation. For us, getting on a flight marked the start of a proper getaway. But then, a series of local trips began to change our minds. There was Clovelly, a picturesque fishing village on the north coast of Devon; Langley Castle in Northumberland; walking with my sister in the Chiltern Hills; and, for Peter, hiking the coast to coast and the South West Coast Path. These trips turned out to be some of our most memorable.

Over time, we learnt to love the staycation, not least because they’re better for the environment, more affordable and usually less challenging in terms of logistics (language, customs and so on). Thankfully, there’s plenty on offer for the outdoorsy-ish, from cycling in the New Forest to hiking in the Yorkshire Dales. With the British summer breaking records, many of us are heading to the coast.

To help you choose your next break on our sunny-ish shores, we’ve teamed up with Classic Cottages to bring you a handpicked list of the best sea views in England.

The magnificent seven sisters are a series of grass-capped chalk cliffs stretching from Seaford to Eastborne. The cliffs are allowed to erode naturally and, as a result, maintain their bright white colour unlike the White Cliffs of Dover, which are greening due to vegetation.

Seen from Seaford Head viewpoint, the seven sisters are achingly romantic. In fact, several filmmakers have used them as a dramatic backdrop. The cliffs appear in Robin Hood: Prince of Thieves, Atonement and Harry Potter and the Goblet of Fire among others. They also came packaged as a default wallpaper in Microsoft Windows 7.

The 14-mile point-to-point walk along the clifftops is well worth doing. Look out for butterflies, wildflowers and, of course, some of the best sea views in England.

Woolacombe is one of the best beaches in the country. In fact, this three-mile stretch of golden sand was voted Beach of the Year 2021 by the Sunday Times.

A favourite with surfers, Woolacombe is part of the North Devon World Surfing Reserve, which grants the area a level of protection similar to Britain’s national parks. As well as surfing, there is kayaking and kitesurfing on offer as well as the Woolacombe beach walk.

There are plenty of cottages with sea views in Devon that offer a comfy base for days of swimming and surfing or indeed just sunbathing. Stop by the Barricane Beach Cafe for a Sri Lankan curry – something of a Woolacombe rite of passage.

The Jurassic Coast is England’s only natural UNESCO World Heritage Site, designated as such for its 185 million years of geological history. Fossil-rich cliffs and sea-carved bays stretch along 95 miles of coastline, much of it in Dorset.

The most iconic sight perhaps is Durdle Door, a craggy 61m (200ft) limestone arch fringed by the shimmering sea and a picturesque sand-and-shingle beach.

As one of the best sea views in England, the site is predictably busy so consider visiting early or late in the day, or during shoulder season (May to early Jun, Sep to early Oct).

Pair a trip to Durdle Door with Old Harry Rocks, a set of towering chalk formations at Handfast Point on the Isle of Purbeck. ‘Harry’ refers to the single stack furthest out to sea but lends his name to his nearby peers.

The sea views here stretch as far as The Needles on the Isle of Wight (see below). Remarkably, the two were linked thousands of years ago by a line of chalk hills that eroded as sea levels rose following the last ice age.

Today, the site is significant as it marks the eastern extremity of the Jurassic Coast World Heritage Site and is the first major landmark that hikers will see on the South West Coast Path when walking east to west. Hire a kayak or book a boat trip to get a closer look, or consider a sightseeing flight for an extraordinary aerial view.

The Needles, Isle of Wight

The Needles are a striking trio of chalk stacks at the western extremity of the Isle of Wight. The stacks rise 30m (98ft) above the sea, but don’t appear particularly needle-like. The name actually comes from a fourth needle-shaped stack called Lot’s Wife, which sadly collapsed during a storm in 1764.

The stacks are guarded by the Needles Lighthouse, a picturesque candy-striped structure built in 1859. Together, they comprise one of the best sea views in England.

It’s worth taking a boat ride for a closer look at the needles as well as paying a visit to the nearby gun batteries. Finish with dinner and drinks at The Hut before retiring to one of the quintessential sea view cottages on the Isle of Wight.

St Michael’s Mount is one of 43 unbridged tidal islands that can be reached from mainland Britain. Reminiscent of Mont Saint-Michel in Normandy, St Michael’s Mount was initially a Benedictine monastery and later the home of the St Aubyn family who still own the grounds.

The Mount is open to visitors and, in the summer, can be reached by a cobbled causeway during low and mid tide. A ferry is also available from Marazion.

As well as medieval buildings, the cliff-top gardens are a highlight. The rock face above the garden acts as a heater, allowing exotic shrubs and flowers to flourish. Look out for lavender and cacti as well as aloe, puya, agave and agapanthus.

At low tide, Pedn Vounder could stand in for a Caribbean beach. A sand bar reveals itself in the turquoise water while craggy cliffs ensure seclusion.

For years, Pedn Vounder was the lesser known sibling of nearby Porthcurno Beach, but a cameo in Poldark as well as several viral videos have revealed this gem to the world.

No matter. Visit early in the day and you can still beat the crowds. The shoulder season of May to early June is a particularly good time to visit. Cottages with sea views in Cornwall will be less in demand and the beaches will also be quieter.

Porthcurno can be reached on foot at low tide if you’re keen to see both beaches. Either way, don’t be surprised if you see swimmers in their birthday suits. Pedn Vounder is, after all, a naturist beach.

Godrevy Lighthouse in St Ives Bay has a rather illustrious history. The tower was built in 1858-1859 after several ships came to ruin on The Stones, a notoriously dangerous reef.

Later, the lighthouse reportedly inspired Virginia Woolf’s 1927 novel, To the Lighthouse. The author first visited on 12th September 1892 and her signature in the lighthouse visitor book went on to sell for £10,250 in a Bonhams auction in 2011.

The wider Godrevy area draws everyone from surfers to bird-watchers. With heathland, sand dunes, coastline, beaches and cliffs, Godrevy is rich in fauna including black-backed gulls, skylarks and fulmars. The route from Godrevy to Hell’s Mouth is popular with walkers while the North Cliffs offer a gentler stroll.

Tintagel is known as the birthplace of the legendary King Arthur and its epic castle is accordingly magical. Clinging onto the clifftops, Tintagel Castle overlooks a spectacular vista.

In the cliffs below lies the evocative Merlin’s Cave in which the famous wizard supposedly wove his spells. The cave is 100m long and bores its way across the entire island from Tintagel Haven on the east to West Cove on the west. The cave is accessible at low tide but fills with water at high tide.

Look out for seals in the water and don’t miss Gallos, a life-size statue of an ancient king who watches over the seas below.

Lindisfarne is a 16th-century castle built on a tidal island that can be reached at low tide by a causeway. It once served as a defensive barrier on the contentious England-Scotland border and was later converted into a ‘bachelor pad’ for the owner of Country Living magazine.

Today, the castle is a popular tourist attraction and offers one of the best sea views in England. The dramatic setting has been used in a number of films. It stood in for Glamis Castle in Roman Polanski’s The Tragedy of Macbeth as well as Mont Saint-Michel in an adaptation of The Scarlet Pimpernel.

Staithes is a traditional fishing village on the North Yorkshire Coast just 10 miles from Whitby. With winding cobbled streets and characterful 18th century cottages, Staithes is the quintessential storybook village.

Its narrow alleys, or ‘ginnels’, have charming names like ‘Slippery Hill’, ‘Gunn Gutter’ and ‘Slip Top’ as well as ‘Dog Loup’, which is said to be the world’s narrowest alley at just 18 inches.

The village has a long history of seafaring. Captain James Cook once lived in Staithes and remnants of his time there are scattered around the village. The Captain Cook & Staithes Heritage Centre recreates the local shop in which he worked and the museum shares over 200 letters, books and medals that showcase his life and career.

North Yorkshire’s coastline is known as ‘the Dinosaur Coast’, so amateur fossil hunters will find plenty here too.

The reefs at Whitburn Steel once made the surrounding stretch of coastline the most dangerous in the country. There were 20 shipwrecks in 1860 alone. Overall, there was an average of 44 shipwrecks per every mile of coastline.

Souter Lighthouse was built in 1871 to warn ships away from the treacherous rocks. It was the world’s first lighthouse purpose-built for electricity and, when completed, was said to be ‘without doubt one of the most powerful lights in the world’.

Sadly, the lighthouse was decommissioned in 1988 after 117 years of service but is open to the public today. A climb to the top reveals clifftop grasslands, rugged coastline and one of the best sea views in England.

The Bempton Cliffs tower over the spectacular Yorkshire coast. The cliffs constitute the UK’s largest seabird colony and are protected by the RSPB as a nature reserve.

The hard chalk of the Bempton Cliffs is resistant to erosion and the sheltered headlands and crevices are perfect for breeding. Between March and October, half a million seabirds gather to nest here – among them gannets, guillemots, razorbills, kittiwakes and fulmars. Puffins join the fray between April and July.

Six viewpoints are dotted along the clifftops offering stunning views of the nesting birds and the North Sea beyond them.

Robin Hood’s Bay on the Yorkshire coastline marks the end of the popular Coast to Coast walk. Here, brooding cliffs overlook a small fishing village of cobbled streets, narrow alleys and charming cottages that seem poised to spill into the sea.

With a maze of winding alleys, Robin Hood’s Bay was once a haven for smugglers. Alas, one famous thief in particular had nothing to do with the village despite it bearing his name. There’s no evidence that Robin Hood was ever in or near the village.

No matter. Robin Hood’s Bay is worth visiting for its history of smuggling, shipwrecks and storms and, of course, its magnificent views of the sea.