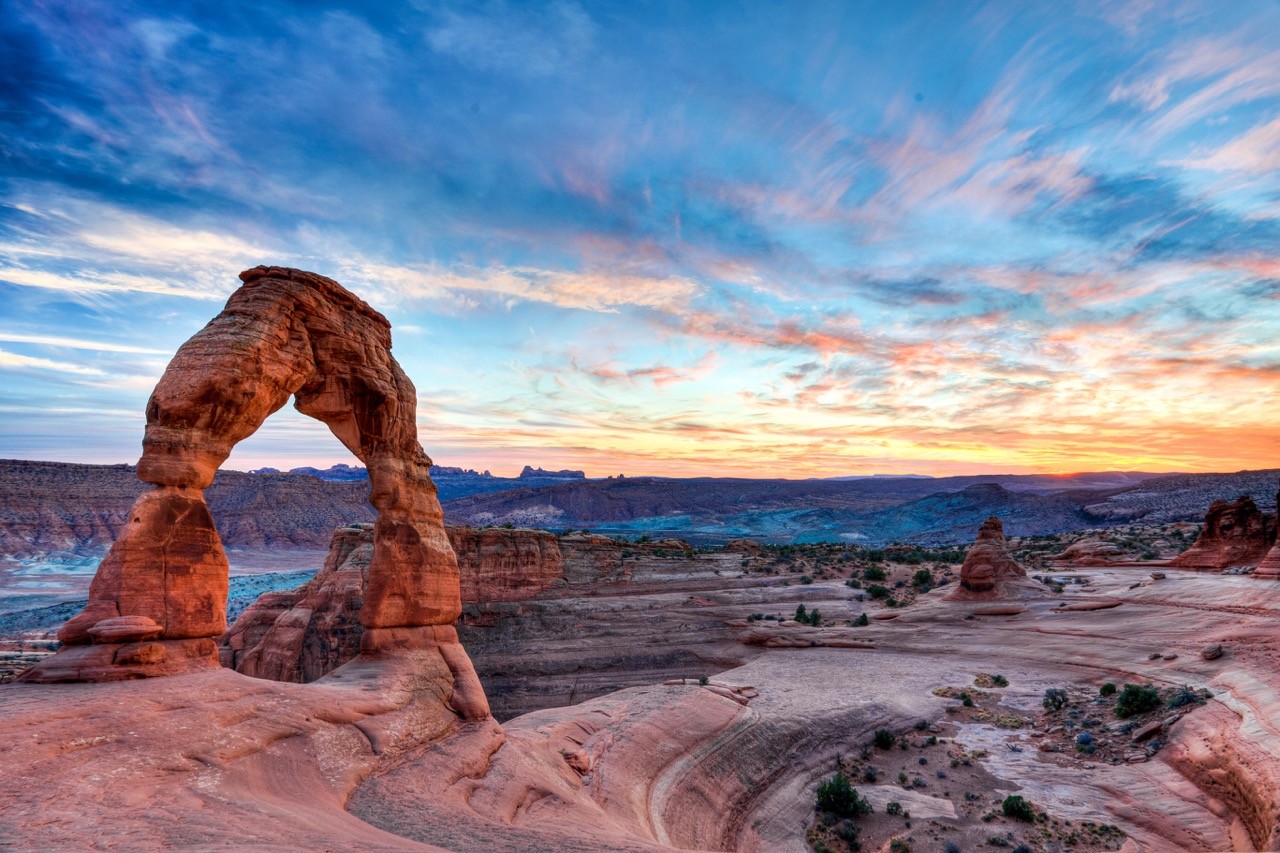 US national parks offer a delightful assortment of sights, from trees that existed at the time of dinosaurs to the most active volcano in the world

As spring takes hold in earnest, nearly all US national parks are preparing for a special week.

To help promote this fantastic celebration of the great outdoors, Atlas & Boots has hand-picked 20 weird and wonderful sights from a number of US national parks that you can see for free next week.

One of its most outlandish sights is the Grand Prismatic Spring in the Midway Geyser Basin. The spring – 370ft (110m) in diameter and 160ft (50m) deep – is the largest hot spring in the US and the third largest in the world after Frying Pan Lake in New Zealand and Boiling Lake in Dominica. The spring’s extraordinary colours are a result of pigmented micro-organisms growing around the edges of the mineral-rich water.

Bryce Canyon is one of the more otherworldly of US national parks. Interestingly, it is not technically a canyon as it was not formed by erosion from a central stream. Instead, erosion spread out from the origin of a stream channel and created large amphitheatres featuring delicate pinnacles up to 200ft (60m) in height. These pinnacles, called ‘hoodoos’, can be found on every continent, but Bryce boasts the largest collection in the world. Sunrise and sunset are ideal times to observe this extraordinary landscape.

Crater Lake may be one of the less-famous US national parks but it boasts an incredible centrepiece nonetheless. Its eponymous caldera lake is the deepest lake in the US. At 1,943ft (590m) deep, it is about six times the height of the State of Liberty.

There are no rivers flowing into or out of the lake but rain and snowfall compensate for evaporation at a rate which replaces the total body of water every 250 years. Another fascinating fact comes from the ‘Old Man of the Lake’, a full-sized tree which is now a stump that has been bobbing in the lake for over a century. Its decomposition is so slow because of the water’s low temperature.

Kīlauea is one of the most active volcanoes in the world. It is located on the southeastern slope of neighbouring Mauna Loa and for many years was thought to be a satellite rather than a separate volcano. Research has shown, however, that Kīlauea has its own plumbing system which carries magma to the surface from more than 60km (37mi) below. Despite its relative remoteness, this is one of the most unmissable of US national parks.

We couldn’t create a list of US national parks without including Yosemite. Half Dome is an extraordinary granite structure that appears as a dome sliced in half (hence the name). It is one of the world’s most stunning big wall climbs and has been free-soloed several times, the fastest of which was by Alex Honnold in just 1hr 22m.

Arches National Park is home to over 2,000 sandstone arches. Like several other US national parks, Arches has featured in a number of Hollywood films (e.g. Indiana Jones and the Last Crusade and Thelma and Louise). The Delicate Arch is the park’s most iconic of all. Carved by erosion, the freestanding sandstone arch is 65ft (20m) tall and is at its most stunning at sunset.

In the 1950s, the National Park Service considered adding a clear plastic coating to the arch to protect against further erosion and eventual destruction. The idea was ultimately abandoned as impractical and contrary to park principles

Rising from the heart of the Tularosa Basin, the blinding white sands of New Mexico stretch over 712 sq km (275 sq mi) of desert, creating the world’s largest gypsum dunefield.

The Monument is completely surrounded by military installations (White Sands Missile Range and Holloman Air Force Base), which has proved problematic. In 2008, it was placed on the Tentative List of World Heritage Sites but was taken off because of an earlier ordinance preventing it from becoming a World Heritage Site.

At the time of the application, US Representative Stevan Pearce said: “I would guarantee that if White Sands Monument receives this designation, that there will at some point be international pressures exerted that could stop military operations as we know them today.”

Carved over millions of years by the Colorado River and its tributaries, the Grand Canyon exposes nearly two billion years of Earth’s geological history.

For thousands of years, the area was continuously inhabited by Native Americans who built settlements within the Canyon and its many caves. The first European known to have seen the Grand Canyon is García López de Cárdenas from Spain who arrived in 1540.

This iconic vista is often overlooked by visitors because of its location 225km (140mi) from both the South Rim and North Rim of the Grand Canyon. It is, however, only five miles from the border of the Grand Canyon National Park and can be reached when travelling from Rim to Rim via Highway 89/89A and an 18-mile excursion towards Page, Arizona.

Ancient sea ledges, deep rocky canyons, flowering cactus and desert wildlife all abound in the Chihuahuan Desert. Hidden in its northern reaches, however, beneath the Guadalupe Mountains, lies one of the deepest and largest caverns ever found.

One of its most spectacular sights can be seen at the mouth of the cave where more than a quarter million bats congregate in the summer. At sunset, they spiral up in a mighty exodus as they search for food – but don’t worry, they don’t eat humans.

This imposing volcanic formation looms more than 1,200ft (365m) above the rolling prairie surrounding the Black Hills. It features hundreds of parallels cracks, making it one of the finest traditional crack climbing areas across all US national parks.

The monument is considered sacred to the Lakota and a number of other local tribes. According to folklore, some girls went out to play and were spotted by several giant bears. To escape, the girls climbed onto a rock and prayed to the Great Spirit to save them. Hearing their prayers, the Great Spirit made the rock rise from the ground towards the heavens. The bears, in an effort to climb the rock, left deep claw marks in the sides (the marks which are visible today). When the girls reached the sky, they were turned into the star constellation the Pleiades.

General Sherman is a giant sequoia tree located in one of the more famous US national parks. By volume, it is the largest living single stem tree on Earth. With a height of 275ft (85m) and a diameter of 25ft (8m), General Sherman has an estimated bole volume of 52,513 cubic feet (1,487 cubic metres).

The sequoia’s age is estimated at 2,300 to 2,700 years, meaning it is among the tallest, widest and longest-lived of all trees on the planet.

We couldn’t choose only one feature of Denali National Park, a 24,500 sq km (9,460 sq mi) subarctic wilderness in Alaska. It is home to the 20,300ft (6,190m) Denali, the tallest mountain in North America and one of the seven summits, as well as 40 named and hundreds of unnamed glaciers.

Denali was in the news in September 2015 when President Obama announced the renaming of the mountain to the locally-used ‘Denali’ from ‘Mount McKinley’, so named after erstwhile US president William McKinley.

Alaska is also home to two US national parks in the Arctic Circle (Gates of the Arctic National Park and Kobuk Valley National Park) but, alas, neither are on the free entry list.

Pinnacles is the most recently designated of US national parks. Added to the list in 2013 due in part to its condor recovery program, Pinnacles is little trekked and little known – one of the best reasons to visit.

Ancient ruins may be more closely associated with Central and South America but there are 27,000 historic and prehistoric structures preserved within US national parks and the National Parks System, including these Aztec Ruins in New Mexico.

The ruins, about 3.2km (2mi) long and 1.6km (1mi) wide, contain multi-story “great houses” as well as smaller pueblos. The West Ruin, open to visitors, once had more than 500 rooms centred on an open plaza, many of which still have their original wooden roofs. Its central feature is a ceremonial great kiva over 48ft (15m) in diameter, reconstructed to illustrate how such a place may have looked in use a thousand years ago.

Approximately 113km (70mi) west of Key West lies Dry Tortugas National Park, one of the more remote US national parks. The 260 sq km (100 sq mi) park is mostly open water with seven small islands. Reached only by boat or seaplane, the park is home to the magnificent Fort Jefferson, the largest masonry structure in the western hemisphere.

Death Valley is not only one of the lowest and driest places in America, it is also the hottest place on Earth. On 10th July 1913, Furnace Creek Ranch in Death Valley registered a searing temperature of 56.7°C (134°F)!

The Valley is home to picture-perfect sand dunes, water-sculpted canyons and extinct volcanic craters. One of its most famous features are its sailing stones, a geological phenomenon where rocks move along a smooth valley floor without human or animal intervention.

At Death Valley’s Racetrack Playa, the tracks have been studied since the early 1900s, yet the cause long remained a mystery. In 2014, timelapse video footage showed the rocks moving at low wind speeds within the flow of thin melting sheets of ice. The cause is therefore officially known as ‘ice shove’.

With more than 4,300 sites, including 600 cliff dwellings, Mesa Verde National Park is the largest archaeological preserve in the US.

Its best known ruin, Cliff Palace, is constructed of sandstone, wooden beams and mortar, and dates back more than 700 years. It was home to approximately 125 people but was likely an important part of a larger community of 60 nearby pueblos housing a total of 600 or more people. With 23 kivas and 150 rooms, the multi-story Cliff Palace is thought to be the largest cliff dwelling in North America.

Canyonlands National Park offers a wilderness of canyons and fantastically formed buttes carved by the mighty Colorado River and its tributaries. One of the park’s most famous features is Mesa Arch (which incidentally is one of the standard desktop pictures on Windows 7).

The Arch is reached via a short hike which means it draws crowds, but its east-facing window makes it the perfect place to watch the sunrise. If you want to photograph it, get there early for the best spot.

Petrified Forest National Park is so named because of its large deposits of petrified wood, remnants of tall conifers which grew 225 million years ago – around the time of the first dinosaurs!

Some of the fossilised logs are huge – up to 6ft (2m) in diameter – and at least one spans a ravine to form a natural bridge. The fossils are made up of almost solid quartz. Each piece is like a giant crystal with a rainbow of colors created by impurities such as iron, carbon and manganese.