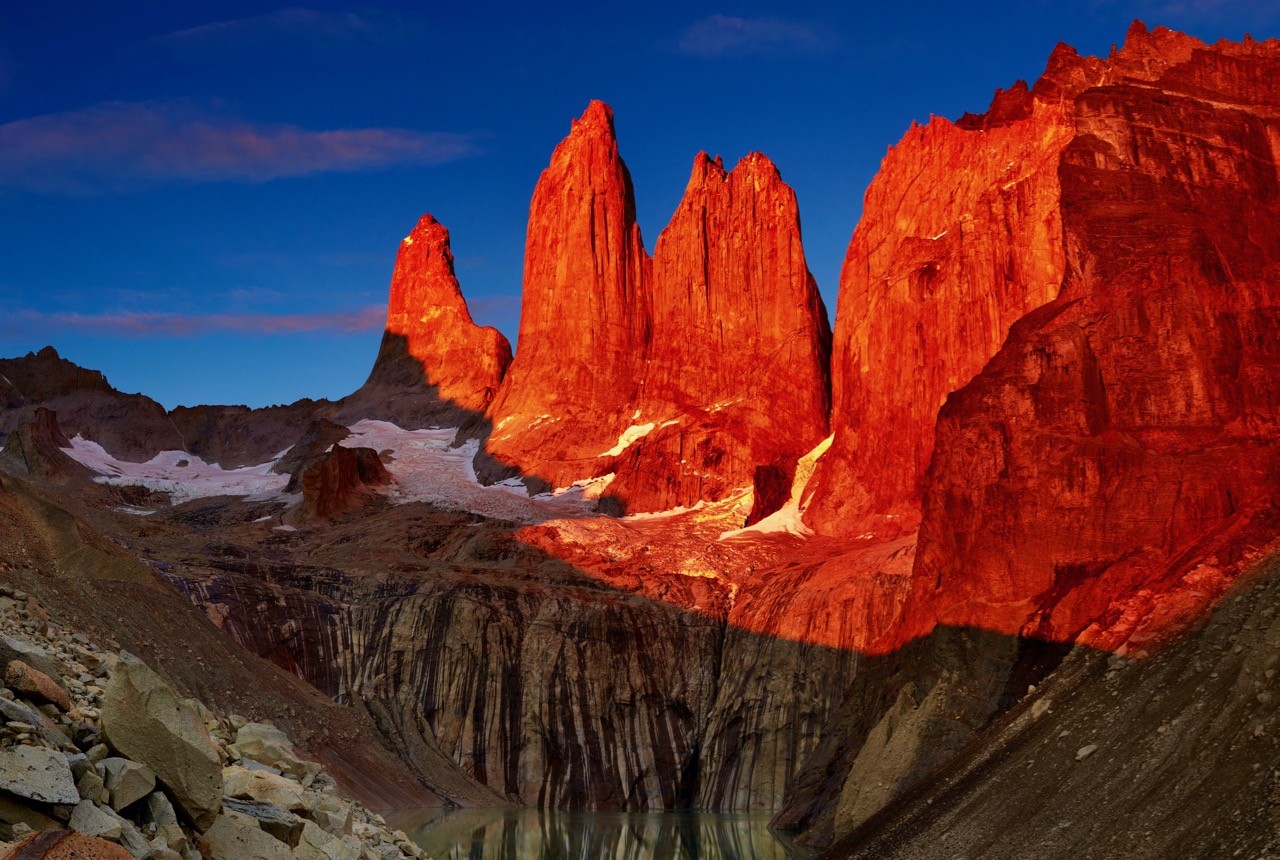 Despite the weather we managed to squeeze in a couple of short hikes (we are British after all) as well as drive around the park in a 4×4 scoping out potential trails for the future. The park has superb hiking infrastructure with exceptionally maintained trails along with campsites and refuges at regular intervals.

I’ve sworn to return one day to complete the below Torres del Paine hiking trails in full. They are some of the best hiking trails on the continent, if not the world.

Spellbinding Grey Glacier sits north of and flows southward into the lake of the same name. The trail traces the lakeshore offering almighty views of the glacier and the dramatic Paine massif throughout the day.

Starting at Refugio y Campamento Paine Grande, hike northwestwards towards the glacier with the lake on your left (see map below). The final steep climb to 1,200m at Paso John Gardner is well worth the effort. You’ll be rewarded with the best views of the day.

This is a more relaxed and undulating path that follows the north shore of Lago Nordenskjöl. It’s rarely steep and not too demanding for the occasional hiker. Starting at Campamento Italiano, the Paso Los Cuernos threads its way between the soaring Cuernos del Paine massif and the sapphire lake below.

Throughout the hike you’ll enjoy views on the left of the jagged peaks that define Patagonia with the gentle and serene lake on your right.

This is probably what you came to Patagonia to see – it’s the most popular of the Torres del Paine hiking trails. The towers, rivalled only by Fitz Roy and Cerro Torre of Los Glaciares National Park in Argentina, are mesmerising in shape and form.

Appearing to soar nearly 2,000m (6,500ft) upwards from the Patagonian steppe below, the granite pillars of Torres del Paine dominate the surrounding landscape. The trail takes you to the Base de las Torres where, if the weather’s right, you’ll get that postcard-perfect photograph.

The nearby Campamento Torres is perhaps one of the most beautiful campsites in the world. The hike involves a 45- to 60-minute boulder scramble to the Miradór Las Torres.

The magnificent French Valley is a natural basin ringed by the black slate “horns” of the Cuernos del Paine. Here you can hike beneath the glacier-covered slopes of Cerro Paine, the highest summit in the range at 2,850m (9,350ft), and take in panoramic vistas from the western side of this extraordinary sweep of mountains.

A return hike from Campamento Italiano is required as there’s nowhere to camp on the trail.

The W takes in large sections of the aforementioned routes and ensures you get right in the thick of the glorious mountain ranges from both sides. It’s best hiked from west to east for views of the Los Cuernos peaks and to save the toughest sections for when your backpack is (hopefully) at its lightest.

The first leg is alongside Lago Grey, from Lodge Paine Grande to Refugio Lago Grey, with great views of Glacier Grey along the way. The middle section is a steep ascent of the glacier and waterfall-clad Valle Francés offering a closer look at Los Cuernos and Las Torres.

The final leg takes you to the lakeside viewpoint right beneath the three towers.

The big dog! Complete the Circuit and you’ll bag all the best hikes in Torres del Paine at once. The Circuit takes in the W, as well as the rear side and less crowded north side of the park. It’s better tackled anticlockwise from Refugio Las Torres for the unrivalled Glacier Grey panorama opening below you as you cross the highest point of the trek, Paso John Gardner.

While the W usually takes four to five days, the Circuit requires seven to nine days, allowing extra time to linger at the campsite below Paso John Gardner, as it can often be too dangerous to cross during high winds. It’s also a good opportunity to build in a much needed rest day.

What: Hiking along the sapphire-coloured lakes and black-tipped horned mountains of Torres del Paine National Park in Chilean Patagonia, one of the most beautiful places in the world.

Where: We stayed at Weskar Lodge situated just a short walk from Puerto Natales, the nearest town to the park, and on the main road heading to the park. The modern yet extremely cozy hotel enjoys beautiful views of the fjord and mountains surrounding it – a destination in its own right.

The hotel has a beautiful dining and lounge area complete with an open wood fire. Each room enjoys excellent views, an Internet connection and much needed heating.

When: As mentioned, we made a mistake by visiting in late autumn (mid-May). There were some clearer days during our stay but without a doubt the best time to visit is between November and April.

That said, Patagonian weather is fickle and can change dramatically throughout the year with little warning. Come prepared for all eventualities.

How: We spent six days in Puerto Natales 75km (46miles) from the southern entrance of the national park. We made numerous day trips into the national park by driving the 1h30min Ruta del Fin del Mundo (route of the end of the world) into the park.

The town is the prefect base for exploring the Torres del Paine hiking trails and you avoid paying for the eye-wateringly expensive hotels situated within the park boundaries. Weskar Lodge is the perfect place to base yourself for day trips into the park. The friendly staff can help organise excursions as well as affordable car hire from a local company.

The national park entrance fee for foreigners is $18,000CLP (£18/$28) which you can get stamped when you re-enter the park to avoid further charges.

Distances in Chile are huge so we advise flying from Santiago to Punta Arenas with LAN. Tickets are best booked via skyscanner.net. From Punta Arenas it’s a three-hour bus journey north to Puerto Natales. Buses leave regularly throughout the day priced from around $5,000CLP (£5/$8).

There are several bus companies to choose from. We have used and can vouch for Buses Fernández and Bus Sur. There are bus connections to other parts of Chile as well as destinations in Argentina from both Punta Arenas and Puerto Natales.

Recommended by the National Parks Administration and the National Tourist Service, the Torres del Paine Waterproof Trekking Map is the biggest and most detailed map of the infamous park.

Beautifully written and full of wonderful descriptions and intriguing tales, In Patagonia is an account of Bruce Chatwin’s travels to a remote country in search of a strange beast and his encounters with the people whose fascinating stories delay him on the road.