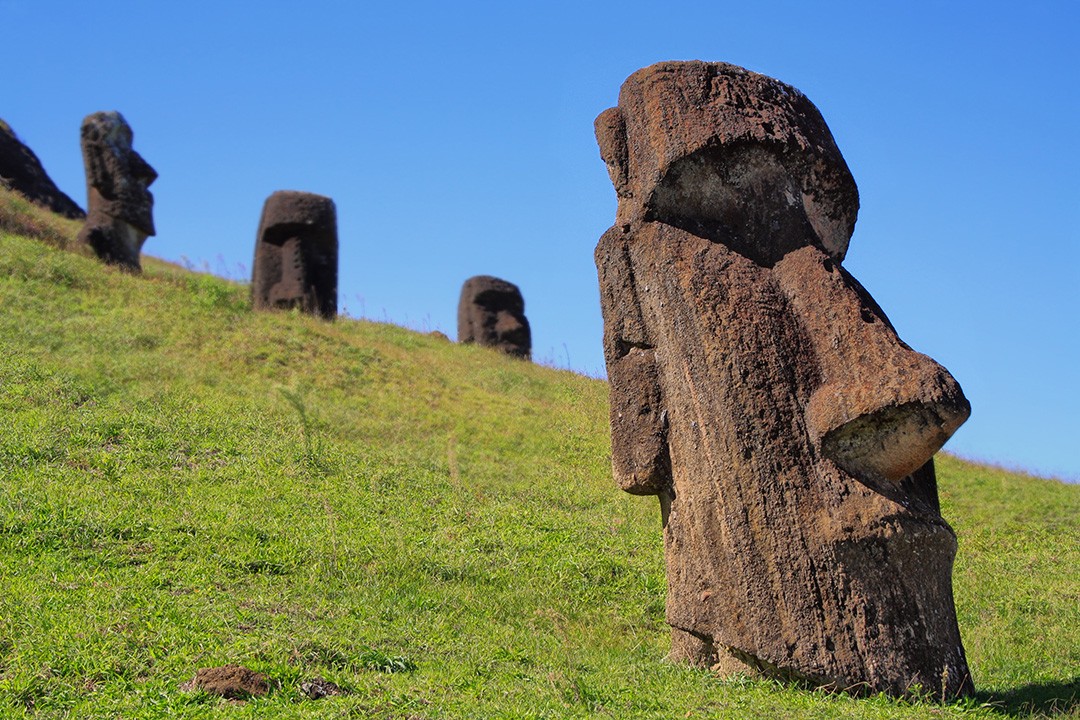 Visiting Easter Island is a special experience. It deserves a place amid the Seven Wonders of the World, surpassing Christ the Redeemer and arguably others

I’m going to begin with a bold statement: visiting Easter Island deserves a place amid the Seven Wonders of the World, easily surpassing Christ the Redeemer and arguably one or two others as well.

Between us, Kia and I have visited all seven wonders and believe that visiting Easter Island deserves a place among mankind’s greatest constructions. Out there in the middle of nowhere, it is often forgotten compared with mainstream monuments and structures.

But it shouldn’t be forgotten and it really shouldn’t be missed. For so many reasons, we left our hearts on Easter Island out there in the middle of the Pacific.

Our visit was deeply anticipated, particularly as it came five months after we had first planned to go. We had initially planned to fly to Chile from Tahiti in December but due to extortionate airfares, an impromptu cruise, an unplanned US road trip and a cheap-as-chips ticket to Colombia, we got to Chile in May instead.

Our budget was dwindling fast but there was no question of not going to Easter Island. It was a bucket-list item that so many people never get to do – how could we give up the opportunity?

And, so, after much scanning on Skyscanner, we booked some reasonably priced tickets to Hanga Roa, Easter Island’s ‘capital city’.

On arrival, Kia and I kept grinning at each other. “Can you believe we’re on Easter Island?” we kept asking. For a Norwich boy and a Tower Hamlets girl, it was hard to believe that we’d ended up on one of the world’s most remote and exclusive destinations.

We hopped into a taxi to Chez Maria Goretti, a charming guesthouse we had booked for six nights. In Santiago, a fellow backpacker called Ruth has told us that five days were too many as the island was so small but we wanted to make sure we saw everything. After all, distance and budget meant we’d probably never return to this particular middle of nowhere.

After settling in at Chez Maria Goretti, we decided to pay a quick visit to the nearby Ko Te Riku. Instead of the modest site we expected, we came across several impressive statues (or ‘moai’) with wild horses roaming the fields beneath. It was our first taste of the wonders to come.

At 30km, it’s possible to cycle around the island but as Kia had only recently learned to ride, we decided to hire a car to get around instead. The next day, we travelled counter-clockwise on the outer island road, stopping first at the major sight of Rano Raraku.

Shockingly, the site was almost empty with no more than 20 tourists roaming the grounds. Compared to Machu Picchu or indeed Christ the Redeemer, it was a haven of calm.

Visitors are greeted by the “Big Dude”, a giant and imposing moai that stands sentry at the entrance of the site.

Further on lie dozens of iconic moai as well as the famous Tukuturi, the most humanlike of the moai. We christened it the ugly duckling of Easter Island.

One thing we noticed was that very few people went to see the second section of the quarry itself (the left-hand path at the split). While it was no longer possible to get close to the moai here, seeing so many scattered across their very birthplace was deeply humbling.

After Rano Raraku, we drove to Ahu Tongariki and its 15 imposing statues standing to attention against a brilliant blue sky. Here was the shot from National Geographic covers and Discovery Channel documentaries.

As we stood in the shadow of the moai, we wondered how man could create such creatures without modern tools and equipment and then go on to almost destroy itself.

We used the rest of our stay to visit the major sites of Anakena Beach, Maunga Terevaka and Ahu Tepeu, as well as the smaller sights of Rano Kau and Orongo Ceremonial Village.

In addition, we couldn’t resist visiting the two big sights of Rano Raraku and Ahu Tongariki a second time. It’s worth noting that on our second visit (midday instead of early morning), Rano Raraku was far busier so it’s worth planning two different visits to get the most out of the almost spiritual experience.

The second thing to note is that it’s worth taking the time to see some of the island’s smaller sites (e.g. Ahu Tepeu). Many of these aren’t named as must-sees but we would have hated to miss them.

In short, Ruth was wrong. There is more than enough to keep you busy for five days. After travelling for so long to get there, why would you want to leave so quickly? Even if you forget for a moment the open-air museum, the tempestuous history or the sheer isolation and seclusion of Easter Island, there is always the breath-taking beauty of the place.

At one point as we drove across the island I turned to Kia and said that it was so beautiful it felt heavy on the heart. The deforestation of the island has had an unusual effect. At times it feels almost like you’re travelling through idyllic English countryside.

But then you look up at the clear blue skies, spot a white sand beach, a turquoise lagoon or swaying palm tree, and realise that maybe this is just the island paradise you’ve always dreamed of.

What: Five days, six nights visiting Easter Island, one of the most remote communities on Earth. The island is home to the moai statues – one of planet’s biggest mysteries.

Where: We stayed at Hotel Chez Maria Goretti, a delightful guesthouse set amid lush gardens in Easter Island’s only settlement, Hanga Roa. The hotel has simple but comfortable rooms and a charming common area where guests can relax and unwind after a day’s exploration.

Breakfast (included in the price) is a grand affair with fresh and delicious cakes served alongside strong coffee and ripe fruits. Contact the hotel directly for the best rates: email info@chezmariagoretti.com or telephone 56-32-2100459.

When: Easter Island has a warm tropical climate throughout the year. Year round there are cooling ocean breezes which help to keep the climate comfortable. However, if you’re visiting Easter Island in summer (December to February) temperatures can soar above 27°C (81°F).

January to March is peak season, meaning higher prices and more visitors. In February there is the Tapati Rapa Nui festival which also draws the crowds. July to August can be a bit cooler with average temperatures of 22°C (72°F), although brisk winds can often make it feel even cooler.

The shoulder seasons, April to June and October to December, are great times to visit as the climate is temperate and prices more affordable.

How: As I’ve mentioned, the island is remote. That’s part of why it’s such a desirable destination. However, it does make visiting Easter Island a bit of a challenge. The only direct flights are from Tahiti in French Polynesia or Santiago on mainland Chile.

Basically, if you’re not already in these destinations then you’ve got a long connecting flight in front of you. LAN is the only airline that flies to Easter Island. Their ultra modern fleet departs weekly from Tahiti (5.5 hours) or daily (apart from Tuesdays) from Santiago (6 hours). Book via skyscanner.net.

Failing that the only way to access this remote island is via private yacht or cruise ship. But be warned, the island is buffeted by strong winds year round, particularly in the summer.

The island itself is easy to navigate. The best way to see it is to hire a car from Aku Aku Turismo starting from $50 per day. They have a reliable armada of 4x4s, hatchbacks, scooters and quads to choose from.

There is only one town, Hanga Roa, on the island so most accommodation, including Hotel Chez Maria Goretti, is centred around there. There are two main circuits to drive: the southeastern and the western. The majority of the “postcard” sights are line the longer southeastern circuit but the smaller western sights are not to be missed either.

Lonely Planet Chile & Easter Island includes a comprehensive guide to Easter Island, ideal for those who want to both explore the top sights and take the road less travelled.