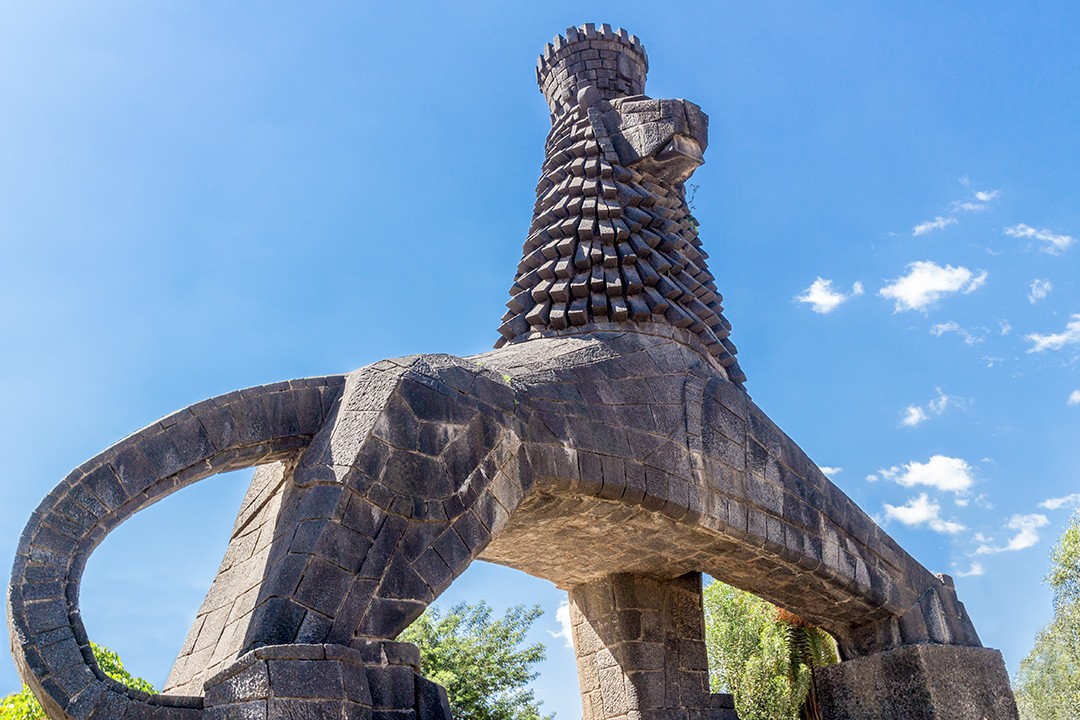 So to Addis Ababa, the final stop on our month-long Ethiopian epic. It’s not unfair to say that this rambling expanse of brown-hued avenues has little cheer or charm. Most tourists stop only in transit en route to the country’s better sights.

To skip Addis, however, is an act of folly, for Addis is essential to understanding Ethiopia. The capital is home to Lucy, the famous fossil that rewrote the story of humanity; it houses over 110 international embassies; and is the headquarters of the African Union.

Addis Ababa offers excellent cuisine, absorbing museums and a unique insight into the many contradictions of Ethiopia. It’s both international and parochial, progressive and religious, developing but struggling.

After a few days to regroup in Bishoftu, we were ready to explore once more. We ventured out on a DIY Addis Ababa walking tour for a street-level view of the sprawling city.

We stayed at Sheraton Addis and caught a cab to the first sight on our walking tour (the Holy Trinity Cathedral). If you wish to walk the entire circuit from and back to the Sheraton, allow for a distance of 12km and walking time of 2hr 30m.

The Holy Trinity cathedral is one of Ethiopia’s most important places of worship. With a large copper dome, ornate spires and intriguing mixture of architectural styles, it’s a good place to start your Addis Ababa walking tour.

You may have to enlist a local to help you locate the priest who will duly grant entrance to the cathedral – often in exchange for a small donation.

Do stop by the churchyard which hosts the graves of a number of patriots who opposed the Italian occupation – among them, British suffragette Sylvia Pankhurst who died in Addis Ababa in 1960 and received a full state funeral!

The National Museum of Ethiopia is a worthy stop on your Addis Ababa walking tour if only to see the cast of Lucy, the fossil that rewrote the story of humanity.

Discovered in 1974 by paleontologist Donald C. Johanson in the Afar region of Ethiopia, Lucy’s 40%-complete skeleton was dated at 3.2 million years old, making her the earliest known human ancestor at the time. She was 1.1m (3ft 7in) tall and is thought to have died as a young adult.

The National Museum’s basement level has two casts of Lucy: one lying prone and the other (less impressive) cast, standing upright. The real bones are kept in the museum archives.

The courtyard of St George’s Cathedral offers a quiet spot of calm for observing worshippers who sit in clusters on the benches around the cathedral.

The cathedral, named after the patron saint of Ethiopia, was commissioned by Emperor Menelik II to mark his 1896 victory over the Italians in Adwa.

Octagonal in shape and neoclassical in style, St. George’s was completed in 1911 with the help of Greek, Armenian and Indian artists, and has played an important part in Ethiopian history. Empress Zewditu (in 1916) and Emperor Haile Selassie (in 1930) were both crowned here.

We were hoping to stop at Tomoca Coffee on Wawel Street for some much-required refreshment. Sadly, we arrived in early afternoon to find the place heaving. Instead of the comfy chairs we’d envisioned, we found three standing tables and a small square room packed mainly with men. I wasn’t entirely comfortable heading into this fray, so we continued to nearby Raizel Cafe instead.

Less characterful but far more spacious, Raizel is a nice spot for richly flavoursome coffee and a slice of fresh cake. There are also pastries, pizzas and sandwiches on offer, so do refuel before continuing your Addis Ababa walking tour.

From Raizel Cafe, it’s a 2km walk to the Derg Monument, so you may wish to take a taxi for this portion.

Built under Derg chairman Mengistu Haile Mariam, the monument is adorned with a great red star and golden hammer and sickle, and stands today as a lasting reminder of Ethiopia’s painful communist period.

It’s said that the current government, the EPRDF which overthrew the Derg, has deliberately abandoned the monument to ruin and there has even been talk of demolition.

Lion of Judah Monument and statue

The Lion of Judah Monument comes with quite a story. Erected on the eve of Haile Selassie’s coronation in 1930, it was looted by Italians in 1935 and taken to Rome where it was placed next to the enormous Vittorio Emanuele II Monument.

In 1938, during celebrations to honour the Italian Empire, Eritrean patriot Zerai Deres spotted the monument and interrupted proceedings to kneel and pray before it. Confronted by police, Deres fought back with a scimitar, shouting ‘the Lion of Judah is avenged’. He wounded several officers, reportedly killing five, before being shot and arrested. He died seven years later in Italian prison, but his legend lives on in Ethiopia and Eritrea.

The monument was eventually returned to Addis Ababa in the 1960s and today stands in front of Addis Ababa central station. Nearby is the impressive Lion of Judah Statue.

The ‘Red Terror’ Martyrs’ Memorial Museum is a small but powerful museum dedicated to the victims of the Derg regime. Reminiscent of Cambodia’s S21, the museum displays walls of photos depicting just some of the estimated half a million people killed under the Derg.

Displays include torture instruments, skulls and bones, coffins and the bloody clothes of victims, making for a harrowing but important experience.

One cabinet displays a watch given to a woman by her husband as he was led away by Derg soldiers. “Keep this safe. One day you will need it,” he told her. When the museum opened, she brought the watch here.

Sadly, we didn’t make it to the Ethnological Museum, but it comes highly recommended by both guidebooks and locals. The museum covers the breadth of Ethiopia’s cultural and social history divided into sections based on the life cycle: Childhood, Adulthood and Death and Beyond. It covers a wide range of subjects from birth and rites of passage to war and medicine all the way to burial structures and tombs – likely worth a stop on your Addis Ababa walking tour.

Where: After a month in Ethiopia, we allowed ourselves the luxury of two nights at Sheraton Addis, affectionately known as the Grand Old Dame of Africa. With its classic decor, sprawling grounds and immaculately uniformed staff, the Sheraton Addis does indeed feel grand.

This is the Africa of diplomats, military men and officious news correspondents. One may argue that it isn’t the ‘real’ Africa but as we said in TIA, there is not one ‘real’ Africa. We were as happy here as anywhere. In fact, lazing in the lounge with its plush carpet and brass trimmings, you could almost believe you were on the Orient Express. Add to that impressively intuitive staff, a tasteful room and princely breakfast, and it’s hard to find fault with this grand old dame of Africa.

When: The best time to visit Addis Ababa in Ethiopia is October to March when there are pleasant temperatures, blue skies and low rainfall in most parts of the country.

How: Sheraton Addis operates a free shuttle to and from Bole, the country’s primary international airport. Book international flights via skyscanner.net.