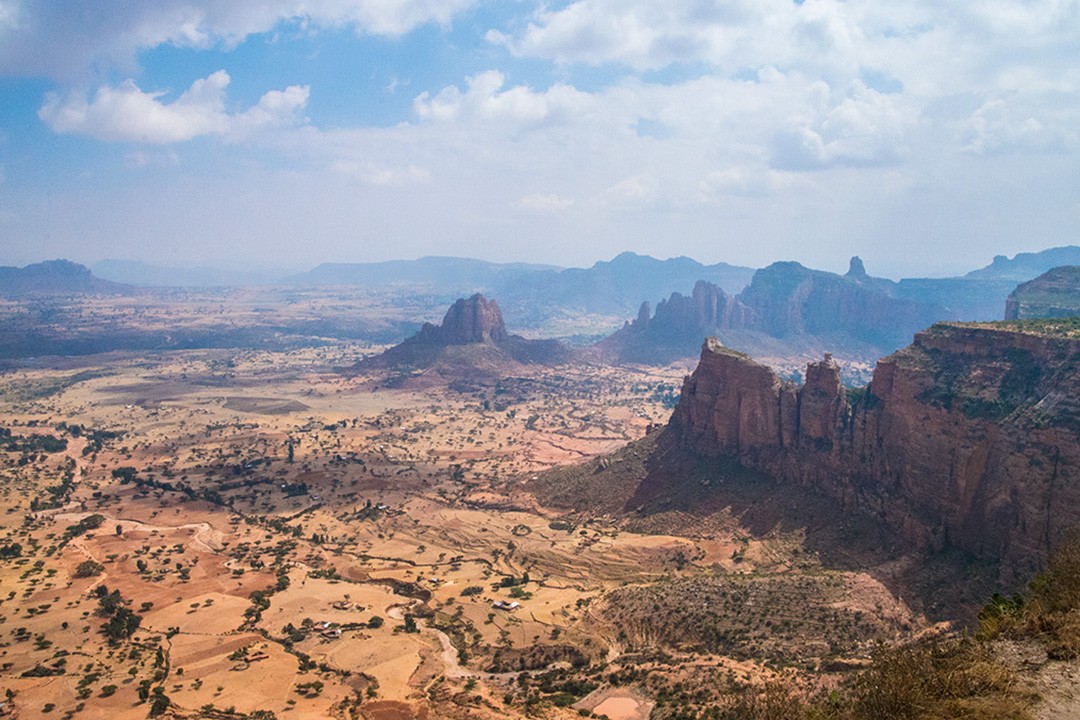 To reach the Tigray churches of Ethiopia, one must scale sheer rock, inch along narrow ledges and skirt around yawning chasms – all in bare feet. Naturally, we leapt at the chance

I was feeling uncharacteristically nervous. It wasn’t the narrow ledges with sheer drops that had me spooked, but the prospect of climbing with ropes – something I’d never done before.

On viewing Abuna Yemata Guh, however, you can understand why ropes are sensible. This rock-hewn church in the Gheralta region of Ethiopia is carved into the side of a vertical spire of rock with 200m (650ft) drops on all sides. To reach it, you must scale a sheer wall of rock and inch along a precipitous ledge, all in bare feet. In fact, Abuna Yemata Guh is said to be the world’s least accessible place of worship.

Abuna Yemata Guh is one of around 120 Tigray churches that were carved into cliff faces, caves and improbable plateaus between the 4th and 15th centuries. The lofty perches were chosen we’re told for their natural protection against enemies of the Church.

We set off at 8am for the 45-minute drive to the base of the spire, mindful of the stories we’d heard at dinner. One woman had given up halfway through the climb while another had frozen on the final ledge.

I steeled myself as we said farewell to our driver and started the hike with Haile, our guide. The first half hour was relatively gentle: steep but perfectly doable. Soon enough, we came to a sheer section and Haile readied to climb. Along the way, he had picked up four ‘scouts’ to help us up. It was two too many but we didn’t argue with the men holding our ropes.

I started to climb, guided by a scout who was helpful, but not quite as experienced as I would have liked. At one point, he told me to grab onto a spindly tree which grew from a crack in the rocks. I knew from climbing Nevis Peak that grabbing trees and roots should be a last resort lest they rip and fall.

I inched upward, mindful of Peter’s advice to keep three points of contact to the wall. The ascent was thrilling in the same way as diving: the adrenaline pulsed in my chest as I was pushed just far enough outside my comfort zone.

After slow and careful progress, I levelled out, thrilled by the climb but also pleased to be on (relatively) solid ground. Peter followed me with little difficulty and we continued upward, hopping across rocks and scrambling up wall.

Finally on the home straight, we were faced with a precariously narrow ledge which dipped into a literal hole in the wall. We crossed it carefully, then entered the church with triumph, pausing first to cover up.

Inside, we met a local priest who told us with pride that pregnant women, babies and old people attend Sunday services and no one has (yet) fallen off.

We took some time to admire the well-preserved frescoes adorning two cupolas and learnt about Abuna Yemata, one of the nine saints, who chose the pinnacle of Guh as the church’s location to keep it from the enemies of the Ethiopian Orthodox Church.

Soon after, it was time to tackle two other Tigray churches: Maryam Korkor and Daniel Korkor which lie close to each other high on a cliff edge.

We picked our way through slot canyons littered with boulders, scaled walls of rocks that wove like waves, and climbed ever higher in pursuit of the Tigray churches.

Surprisingly, I found this hike more demanding despite being allowed to now wear shoes. Perhaps it was the sapping heat or that I hadn’t eaten since early morning, but I found myself asking for breaks more often than usual.

After much effort, we reached Maryam Kokor. The church itself was not greatly impressive, but the surrounding views were well worth the hike.

Our final stop was Daniel Kokor, reached by passage through another vertiginous ledge. Comprising two small chambers, Daniel Kokor is said to have served as a monk’s retreat. A niche in the wall opposite the entrance is where the monk would have sat, allowing him to see across the surrounding plains.

As we looked through the doorway over the cliff’s edge, we marvelled at the feats of human endeavour. Here, in one of the poorest countries in the world, lie wonders of architecture largely unknown outside its borders. The Tigray churches may not be quite as impressive as Petra in Jordan or even neighbouring Lalibela, but the sheer boldness of construction is simply jaw dropping. Needless to say, it’s well worth the leap of faith.

What: Hiking to the Tigray churches of Ethiopia, including a climb to Abuna Yemata Guh, Maryam Korkor and Daniel Korkor.

Where: We stayed at Gheralta Lodge, undoubtedly our favourite lodgings in Ethiopia. Gheralta offers wonderfully cozy rooms dotted across a fairytale landscape of yellow meadows set to a soaring mountain backdrop. Friendly animals roam the grounds including a beautiful horse called Kaleb and his donkey companion.

After a hectic week in Ethiopia, Gheralta Lodge provided a much-needed base of quiet and calm. As new arrivals, we enjoyed a complimentary aperitif on our first evening before a meal of fresh and simple Italian-Ethiopian flavours, inspired by owners Enrica and Silvio Rizzotti.

Guests seemed mainly European and often congregated over a glass of wine or cold beer in the lounge area before dinner. The easy, convivial feel was the perfect antidote to the rush and buzz that seems to define Ethiopia.

When: The best time to visit Tigray in Ethiopia is October to March when there are pleasant temperatures, blue skies and low rainfall in most parts of the country.

How: We visited the Tigray churches independently. We organised transport through Gheralta Lodge (1,300 ETB / $47 USD for the day) and picked up a mandatory guide from the Guide Association (your driver will know where to stop).

We visited three churches in one day: first Abuna Yemata Guh (2hr round trip) followed by Maryam Korkor and Daniel Korkor (2.5hr round trip). This was challenging in the heat so you may wish to split the visits across two days.

It’s worth noting that the costs for the day quickly added up. In ETB, visiting the Tigray churches cost:

We were also expected to tip each scout and priest at least 100 ETB (five of them on the first hike; one on the second hike) and tip the guide at least 200 ETB. If you fork out the full amount, fees and tips amount to a total of 1,720 ETB ($63 USD).

We reached Gheralta by private transfer from Wukro (600 ETB / $22 USD; 58km; enquire at Wukro Lodge). A transfer from Mekele will cost a bit more. After our stay at Gheralta, we went on to Axum airport via private transfer (2,200 ETB / $80 USD; 124km, enquire at Gheralta Lodge). We encountered great variation in the price of transfers. As there is no official taxi service, we were very much at the mercy of local dealmakers and often had to grin and bear inflated prices.