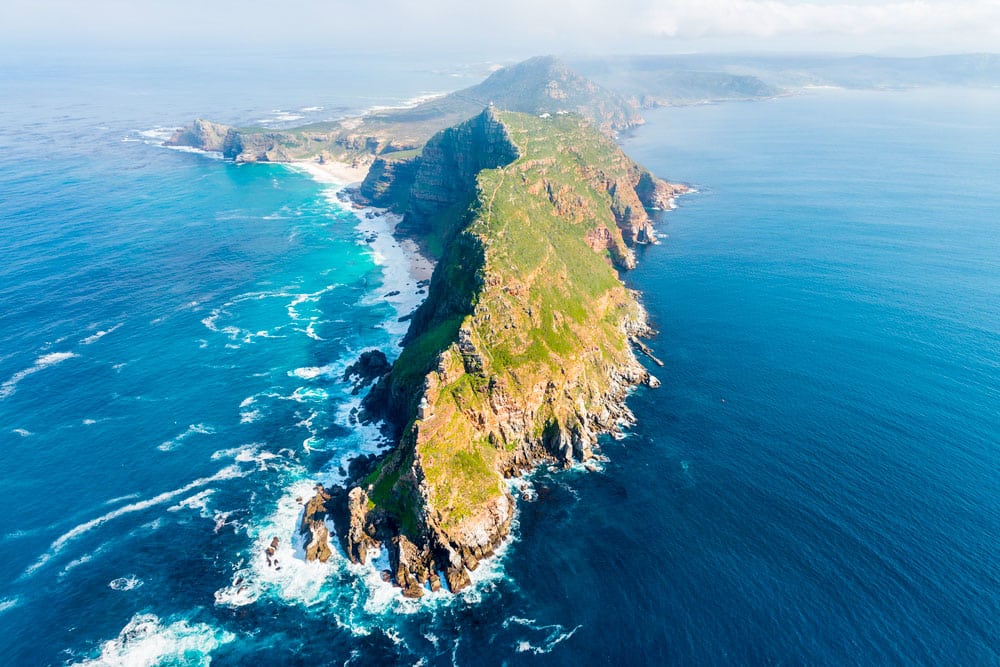 Cape Point and the Cape of Good Hope are iconic geographic features, but are they really where two of the world’s oceans converge?

It makes for a fantastic publicity slogan, doesn’t it? The point at which two great oceans, the Atlantic and Indian, collide in powerful, eye-catching drama. It’s also highly convenient that this colossal spectacle takes place just an hour’s drive from one of the most beautiful cities in the world.

Unfortunately, this bold claim made by countless tour operators in South Africa is not quite accurate.

Cape Point actually comprises three promontories: the Cape of Good Hope, Cape Maclear and Cape Point itself. Dramatically situated at the southern tip of the continent of Africa, the peninsula is the stuff of legends.

Cape Point, along with Cape Horn in Chile and Cape Leeuwin in Australia, is one of the three ‘Great Capes’ that sailors must pass to circumnavigate the globe. Rounding the dangerous Cape Point is where sailing legends such as Da Gama, Magellan, Cook and Slocum have made their names.

Cape Point – or rather the Cape of Good Hope 2.3km away and slightly to the northwest – marks the point where a ship sailing around the headland of southern Africa begins to travel more eastward than southward.

However, Cape Point is neither the southernmost point of Africa nor where the Atlantic and Indian oceans converge. That lies closer to Cape Agulhas located around 150km to the east-southeast of Cape Point.

Unfortunately, Cape Agulhas benefits from neither location (it takes around three hours to reach from Cape Town), fame (it sees a fraction of the visitors Cape Point welcomes) nor spectacle (rugged and windswept it may be, but breathtaking it isn’t).

It’s all rather confusing, but regardless of their nautical significance, Cape Point and the Cape of Good Hope make for a beautiful day trip from Cape Town. The capes are a spectacular sight with towering rocky cliffs above crashing waves, banked by rolling green hills and craggy cliff tops.

The capes are located within a 77km2 section of Table Mountain National Park and aside from the wild and expansive scenery, have a number of points of interest, hiking trails and viewpoints worth investigating.

The area is a popular stop for visitors to Cape Town so expect crowds. That said, it was possible to escape the masses and locate a corner of peace. You just need to stretch your legs to find it.

We hiked up to the old lighthouse (1km / 20 minutes) at the top of the Cape Point promontory (238m), in use from 1860 to 1919. It was replaced in 1919 as it was built too high up and therefore often obscured by mist and fog. From here, we wandered the trails that surround the landmark, snapping photos and watching the ocean (should it be oceans?) in the direction of the Antarctic, some 4,000km to the south.

If you’re feeling really lazy, the Flying Dutchman Funicular runs from beside the restaurant at the bottom up to the old lighthouse. Another great short hike is the 3.5km trail from Buffels Bay to the impressive Paulsberg Peak.

If you have time, the Cape of Good Hope Trail traces a magnificent 34km circular route through the reserve. The hike is completed over two days with a night spent at the basic Erica, Protea and Restio huts on the north side of Da Gama Peak.

After Cape Point, we drove on to the Cape of Good Hope promontory, the most southwestern point of Africa. It was worth grabbing our photograph alongside the famous sign before clambering up the short Cape of Good Hope Scenic Walk (15mins) to enjoy more epic coastal views.

Here, at the top of a rocky crop, we surprisingly found solace. Apparently, most tourists choose not to scramble up to the lookout. On top of the cliffs we sat and enjoyed the far-reaching views of one of the most dramatic coastlines we’ve seen.

We combined our day with a visit to Boulders Penguin Colony so after a half-hour or so we returned to the car park and met our diver for the return journey to Cape Town via Simon’s Town.

On the famous round the world voyage of 1577-1580, Sir Francis Drake referred to Cape Point as “a most stately thing and the fairest cape we saw in the whole circumference of the Earth”.

We’ve not covered quite the same distance as Sir Francis and we’ve not seen as many capes, but I think he may have been on to something.

What: Visiting Cape Point and the Cape of Good Hope, South Africa.

When: The best time to visit Cape Point and the Cape of Good Hope is during the warm summer months of Nov-Apr. Temperatures peak between Dec-Feb and this is also the busiest period. Arrive at opening time or an hour before closing time to beat the crowds.

How: The capes are part of Table Mountain National Park and have opening hours depending on the season.

More information can be found on the official website which also includes information on Boulders Penguin Colony and other points of interest in the region.

Visitors must pay a conservation fee of 303 ZAR per person (about $20 USD). Check the latest tariffs for more information and contact details.

We hired a taxi for the day through our hotel reception ($70 USD which included a trip to Cape of Good Hope and Cape Point and Boulders Penguin Colony). Make sure you agree the daily rate and hours of work with the driver beforehand. You will have to pay for your driver to enter the park as well (76 ZAR / $5 USD for a South African resident). If you self-drive, arrive early to ensure you find parking.

You can also visit Cape Point with City Sightseeing’s Cape Point & Penguin Explorer Tour. We organised logistics during our visit using a Travel SIM which works in numerous countries with a single card and phone number.