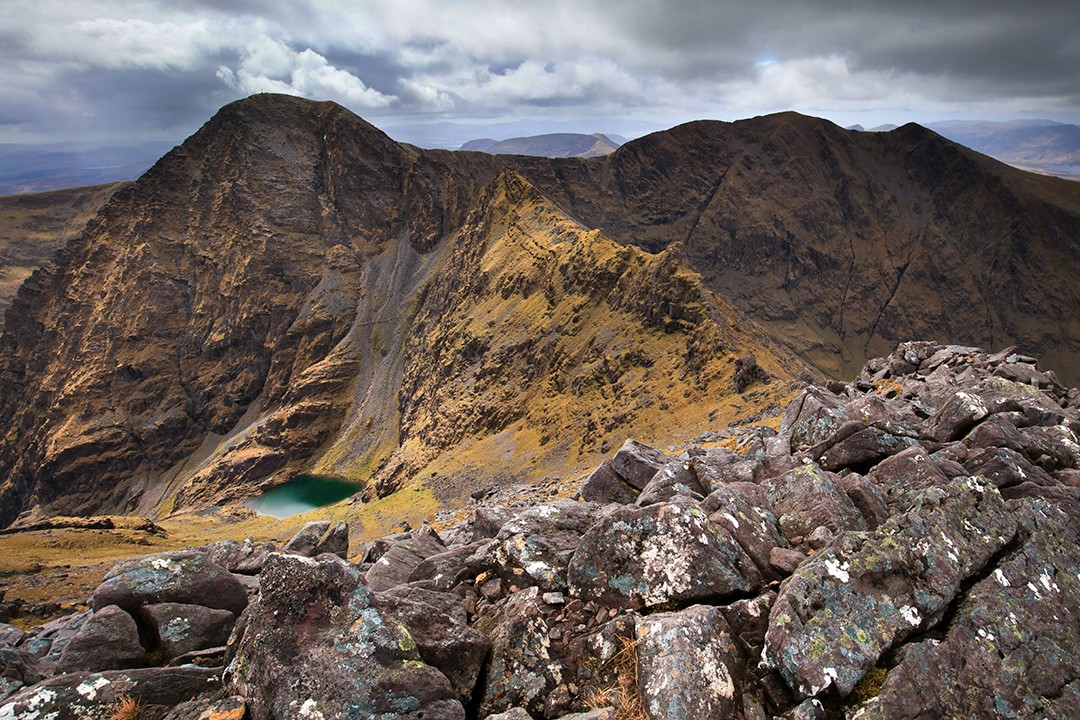 Climbing Carrauntoohil is an excellent introduction to the Reeks District, Ireland’s adventure playground

High cliffs, mountain lakes and fast-running rivers define the range which runs 19km along the eastern boundary of the Iveragh Peninsula. Known as the backbone of the Kingdom of Kerry, the sandstone mountains have been hewn over hundreds of thousands of years by glacial erosion and extreme weather.

Steeped in myth and history, Kerry boasts some of the finest views in Ireland. Naturally, I was only too keen to sample the scenery by climbing Carrauntoohil.

We chose the Coomloughra Horseshoe which incorporates all three peaks: Beenkeragh first, followed by Carrauntoohil and then Caher. Touted as one of the finest hikes in Ireland, the 13km hike showcases the best of the region’s montane scenery with panoramic vistas at the summit of each peak.

The trail is well-trodden, but challenging nonetheless. The rugged route ascends around 1,250m (4,100ft) in total and has some thrilling sections of scrambling along some dicey knife-edged ridges. Here, you will find extraordinary views with some breathtaking dropoffs down to plunging ravines with hidden moraine pools.

The Coomloughra Horseshoe is much longer and harder than most Carrauntoohil climbing routes and should only be considered by those with hiking experience and the appropriate clothing and equipment.

We began our climb at the Hydro Track carpark, 10km south of Killorglin. The initial track is a steep concrete path that quickly ascends to the entrance of the cauldron of the horseshoe. Here, it’s possible to see the rather daunting challenge of the day’s hiking before you.

We crossed the Cottoners River which flows from the adjoining lakes of Lough Coomloughra and Lough Eagher and began our footslog upwards. We were roughly aiming for the summit of Skregmore (Screig Mhór in Gaelic, meaning ‘small rocky hill’) at 848m (2,782ft) before cutting southeast along the ridge towards the summit of Beenkeragh, Ireland’s second highest peak.

Beenkeragh is not the most alpine of peaks, but it does offer the first views of the fertile pastures to the east of the Coomloughra Horseshoe as well as the razorback ridges leading to Carrauntoohil and onwards to Caher.

After a short rest, we pushed on to our next objective: Ireland’s highest mountain. From the summit of Beenkeragh, the trail descends southwest towards the Beenkeragh/Carrauntoohil Ridge, also known as Hag’s Tooth Ridge. This is perhaps the most impressive section of the climb with the summit of Carrauntoohil looming high above a knife-edge trail.

The ever capricious weather did not disappoint. Over the course of the climb, it moved from overcast, drizzly and downright foggy to blue skies and sunshine, and back once or twice more. There was even a smattering of snow thrown in for good measure. It barely mattered: the unyielding scenery obstinately appeared again and again through the breaks in the cloud.

In crossing the ridge, we had some of the best views of the hike with sharp drops down to emerald lakes on one side and gentler slopes off to the shores of Lough Coomloughra and Lough Eagher on the other.

After a lengthy craggy section with some spectacular scrambling along the ridge, the terrain eases somewhat before a final push up to the summit of Carrauntoohil and the highest point in Ireland. At the summit, a 5m (16ft) tall steel cross has been erected, marking the occasion and providing a distinctive prop for summit shots.

Positioned on Ireland’s west coast, it’s possible to see the Dingle Peninsula and Kenmare Bay and even as far as the mountains of North Cork from the summit of Carrauntoohil. The weather as it was meant we couldn’t see quite that far, but the scene was outstanding nonetheless.

From here, we marched on across Caher Ridge, which isn’t as precarious or jagged as the Beenkeragh Ridge, but gets the heart thumping all the same. It begins relatively flatly before increasing sharply near the summit of Caher, Ireland’s third highest mountain and our final summit of the day.

This was our last chance to relax and soak in the panoramic views before starting our descent off the ridge. From here, it was fairly easygoing: downhill across boggy spurs dotted with boulders, then back to Lough Eagher.

There, we found ourselves at the same river crossing where we started that morning, this time looking back to see the challenge of the day’s hiking now triumphantly behind us. Afterwards, it was only a short walk down the track to the car park.

Shrouded in some of Ireland’s most breathtaking scenery, the MacGillycuddy’s Reeks promise the finest views in the Kingdom of Kerry – and there’s no better way to see them than climbing Carrauntoohil, Ireland’s highest mountain.

What: Climbing Carrauntoohil, Ireland’s highest mountain, in the Reeks District in Kerry.

When: The best time for climbing Carrauntoohil is during the summer months of Jun-Aug. However, this is also high season and coincides with school holidays from the end of July through August.

The shoulder seasons of Apr-May and Sep-Oct are also great for hiking, but the weather is more unpredictable. During the winter months, the slopes will likely have snow so winter mountaineering skills and equipment are essential.

How: I climbed Carrauntoohil as part of a guided climb with Kerry Climbing who have years of experience guiding in the Kerry region. They run a number of guided routes for a range of experience and fitness levels as well as climbing and scrambling courses.

The Reeks District is located in mid-Kerry with Killorglin, the most central town of the region. Killorglin is a 20-minute drive from Kerry Airport and is served by flights from Dublin (Aer Lingus Regional) and London Luton and Stansted, Frankfurt-Hahn, Berlin-Schönefeld, Alicante and Faro (all Ryanair). Book flights via Skyscanner for the best prices.

Photographer Valerie O’Sullivan captures the rich heritage and traditions of the area in The MacGillycuddy’s Reeks: People and Places of Ireland’s Highest Mountain Range – an excellent addition to the coffee table.

Disclosure: I travelled to Ireland with support from the Mid Kerry Tourism Cluster. All publications say this, but we really don’t guarantee positive coverage. We say what we think – good and bad – so you can make informed decisions with honest advice.