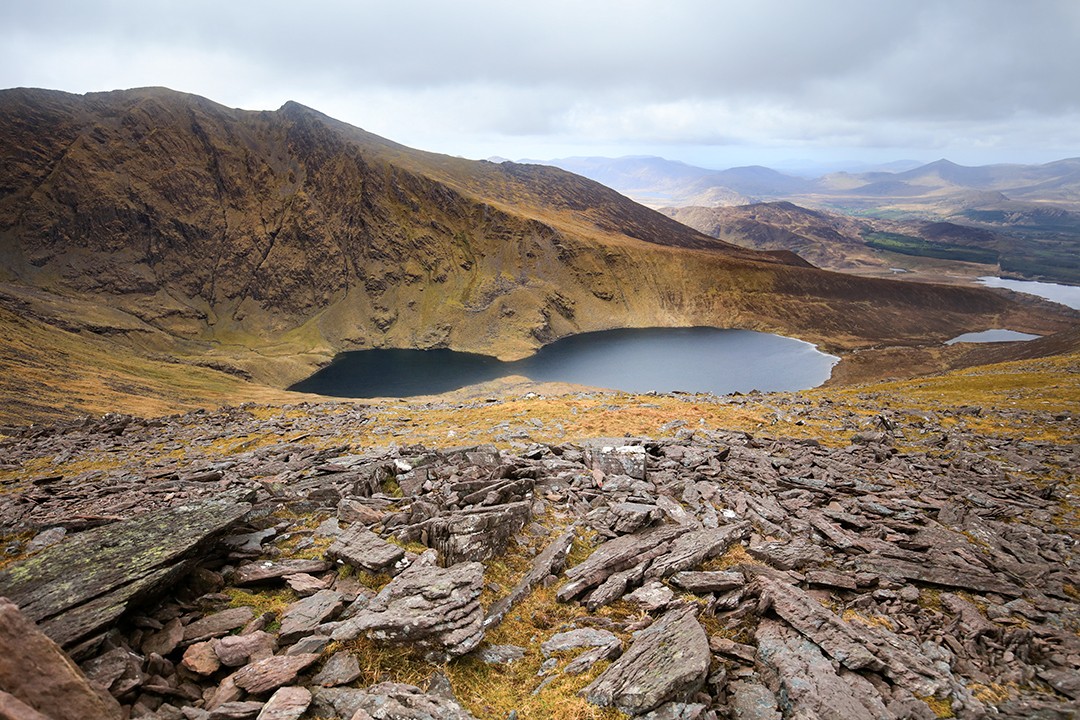 We explore the best things to do in the Reeks District, Ireland’s brand new adventure playground

Set on Ireland’s west coast, the newly named Reeks District or ‘the beating heart of the Kingdom of Kerry’ is home to some of Ireland’s most magnificent scenery. With a wild blend of lofty peaks, untamed coastline and secluded moraine lakes, the Reeks District hosts an array of activities to keep outdoor enthusiasts entertained for days on end.

I visited the Kingdom of Kerry to try some of the best things to do in the Reeks District, Ireland’s brand new adventure playground.

I climbed Carrauntoohil via the Coomloughra Horseshoe route, taking in Ireland’s second and third highest mountains in the process. Touted as one of the finest hikes in Ireland, the 13km route showcases the best of the region’s montane scenery with excellent panoramic vistas at the summit of every peak.

Caragh Lake is a tranquil spot set to the mighty backdrop of the MacGillycuddy’s Reeks mountains. The River Caragh washes in at one end and streams out the other towards the Dingle Peninsula and North Atlantic Ocean.

I spent a morning kayaking from one end of the lake to other, but there are plenty of options that take in parts of the river, including white water.

Couple the lake with a stop at one of the myriad guesthouses and hotels that dot the lakeshore to replace all those calories you’ve worked off. We recommend Carrig Country House & Restaurant and Ard na Sidhe.

“You never have to fight for a wave here,” says surf instructor Tom who has been riding these breakers for 25 years and swears by the exceptional year-round consistency of the waves.

Bedecked in a thick wetsuit, I spent a couple of hours under Tom’s tuition. Although my surf skills leave a lot to be desired, the setting did not disappoint. The surf school is positioned on Inch Beach and with The Strand tavern offering creamy pints of Guinness post-surf, it’s a great way to experience the wild Atlantic.

4. Cycle the Ring of the Reeks

The Reeks offer excellent cycling with quiet mountain roads and off road trails winding their way through Ireland’s most dramatic scenery. One of the best cycling routes is the Ring of the Reeks which starts in Killorglin.

The 90km circular journey carves out a route beneath the watchful gaze of the country’s highest mountains and includes three deeply challenging yet rewarding climbs: the Ballaghbeama Gap, Moll’s Gap and the Gap of Dunloe. If you don’t fancy huffing and puffing your way up and down these acclivities, then there is an entire network of less taxing, more gentle routes on offer too.

Whether it’s open water or lake swimming, the Reeks District has some excellent wild swimming locations. Caragh Lake is an obvious place to start, particularly if you’re lodging on its shores.

If you like your wild swims a touch wilder, then Lough Coomloughra and Lough Eagher at the foot of the Coomloughra Horseshoe are excellent examples of the moraine pools of the Reeks.

Kells Bay beach, Valentia Island Pool and Coonanna Harbour are all excellent, secluded wild sea swimming spots although you may need the help of a local to find them.

Trot through ancient forests or gallop along Blue Flag beaches on the Killarney Reeks Trail with trips ranging from day excursions to multi-day rides. The trail crosses the highlands of Kerry along with the McGillycuddy Reeks via country lanes and mountain tracks (on one of the few post-to-post trail rides available in Ireland).

Away from the slopes, the route traverses forests, marshland, riverside tracks and Waterville beaches as well as the magnificent 6.4km stretch at Rossbeigh. Keep an eye out for the 19th century shipwreck of the schooner Sunbeam which appears in certain conditions in the sand at Rossbeigh.

If you’ve no idea what Hawaiian healing is, you are not alone. Until I visited the Reeks District, I had no idea either. A session at Aloha House was the last activity on my itinerary and it turned out to be a real surprise.

After three days of intense activities, the stretching techniques we learnt in our yoga session did not come easy, but working out the aches and pains of previous exertions was certainly welcome.

Aloha House also offers a range of other therapies including traditional Hawaiian influenced massage, pilates, meditation and art energy therapy. There are several different sessions, classes and activities to try as well as longer retreats and courses – all taking influence from Hawaiian healing.

8. Attend one of Ireland’s oldest festivals

If you’ve exhausted all the active things to do in the Reeks District, then Killorglin’s biggest festival is the Puck Fair, where a goat is crowned and reigns as King Puck for three days. If you think that’s strange, what you’ll find more peculiar is just how normal it seems to a local when they describe the festival.

If goat coronations don’t pique your interest, then consider the ancient folklore and equally perfectly normal festival of Biddy’s Day. Torch-lit processions take to the winding streets to ward off evil spirits from humans and animals alike for the coming year.

Things to do in the Reeks District: the essentials

What: Things to do in the Reeks District, Ireland.

When: The above things to do in the Reeks District are best experienced during the summer months of Jun-Aug. However, this is also high season and coincides with school holidays from the end of July through August.

The shoulder seasons of Apr-May and Sep-Oct can also be a great time to visit, but the weather will definitely be more unpredictable.

How: The Reeks District is located in mid-Kerry with Killorglin the most central town of the region. The town is a 20-minute drive from Kerry Airport, served by flights from Dublin (Aer Lingus Regional) and London Luton and Stansted, Frankfurt-Hahn, Berlin-Schönefeld, Alicante and Faro (all Ryanair).

Shannon Airport is a two-hour drive from Killorglin. It has year-round flights from a range of destinations, including airports in the UK, Spain, Portugal, Germany and Poland, as well as Boston, New York, Philadelphia and Toronto.

The above things to do in the Reeks District are most easily accessed by car. Rental cars are available from both airports as well as in Killorglin.

Photographer Valerie O’Sullivan captures the rich heritage and traditions of the area in The MacGillycuddy’s Reeks: People and Places of Ireland’s Highest Mountain Range, focusing on many of the above things to do in the Reeks District.

Disclosure: We travelled to Ireland with support from the Mid Kerry Tourism Cluster. All publications say this, but we really don’t guarantee positive coverage. We say what we think – good and bad – so you can make informed decisions with honest advice.