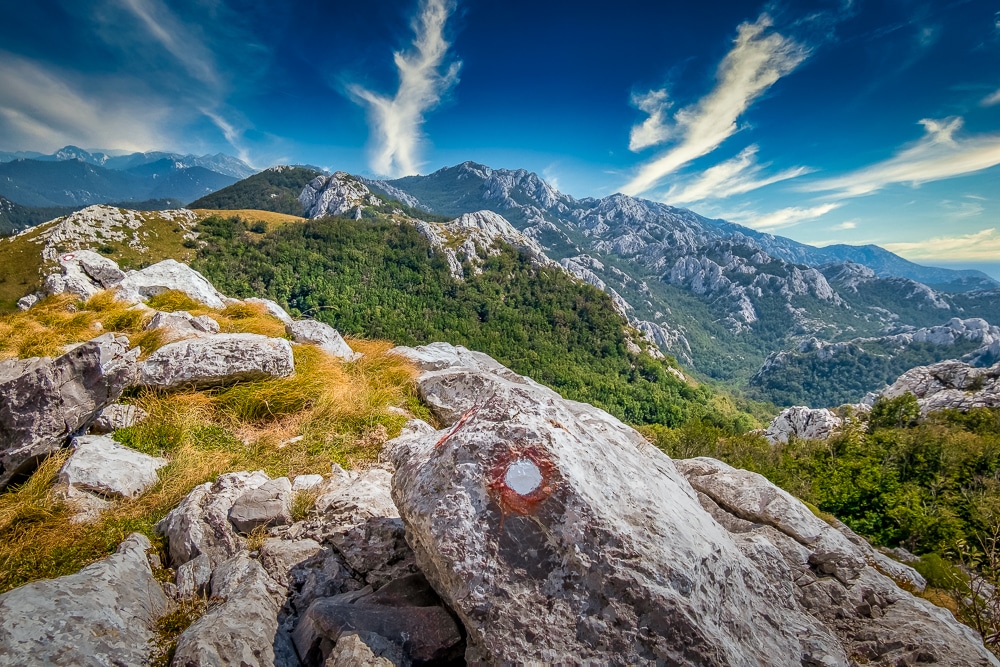 The routes – in Austria, Croatia, Bosnia and Herzegovina, Greece and Serbia – explore some of Europe’s less-visited but no less captivating areas of natural beauty. Next year the franchise is expanding with treks added in a number of destinations including Germany, Portugal and Montenegro.

I joined the Highlander Velebit, a 104km 5-day trek across the Northern Velebit and Paklenica national parks. The route journeys southeastwards through the Velebit Range, which divides continental Croatia from the Adriatic coast and is the country’s largest mountain range.

The Highlander Adventure treks are a perfect introduction into multi-day trekking as they’re a subtle blend of guided trek and self-sufficient expedition. The logistics are largely taken care of with internal travel to and from trailheads, route, food, maps, checkpoints and campsites all pre-arranged.

Trekkers are only responsible for getting themselves to the start point (and walking the trail of course). The treks are non-competitive, but there are daily checkpoints to pass through to gain a certificate and medal upon completion.

The treks are a wonderful way to meet like-minded people and socialise while on the trail. Trekkers all begin at the same point but are soon spread out, as participants walk at different paces and occasionally different routes.

I joined as a solo hiker and while it was easy to find solitude on the trail, other hikers were never far away and always happy to pause for a chat. The evenings were sociable affairs with participants sharing stories around a campfire and beneath the stars.

Day 1 is essentially a microcosm of the entire trek as the scenery is forever shifting throughout the day. From thick pine forest, steep rocky ravines, expansive grasslands and exposed ridges with sweeping Adriatic vistas, the trail effortlessly slips from one landscape to another.

The first day certainly stretched my legs. I’ve categorised it as hard due to its distance as opposed to its terrain. The route chiefly follows a clear and consistent footpath and doesn’t involve extended steep ascents. Instead, it gently undulates while gradually dropping height throughout the course of the day. As such, it was possible to keep up a steady pace of around four or five kilometres an hour throughout.

Skorpovac is the first checkpoint of the trek. The small wooden mountain hut is surrounded by a clearing and has a simple shelter and a well for drinking water. I rolled into camp around 5.30pm tired from a long day’s walk but pleased to have nearly 34km under my belt.

The first day on the trail

That evening I got my first taste of Croatian highland hospitality. I was invited to eat with some local hikers who installed themselves at the shelter. I spent the evening eating hearty sausages and fresh bread over several glasses of rakia, a variety of fruit brandy that’s popular in the Balkans. Sated and cheered, I slept rather well in my tent that night.

After the first day’s baptism of fire, I welcomed day 2, the shortest and easiest day of the trek. The day began with a short forested section providing refuge from the morning sun, already searingly hot. Once out in the open, the trail meandered through meadowland with the occasional rocky scramble and ridge walk.

The highlight of the day was a series of elevated peaks strung along a craggy ridge running parallel to the coast. To the right of the trail lay the glistening Adriatic Sea dotted with rocky islands, while to the left stood rolling hills carpeted with evergreen forest.

I made the most of a carefree day by pausing for several breaks to enjoy the view. The following days involved more considerable challenges so I figured I might as well enjoy the easy day while it lasted.

The checkpoint that night at Baške Oštarije was a wholly civilised affair with the small campground located alongside a hostel replete with a beer garden – an entirely delightful place to loaf for the afternoon.

That evening there was a presentation by renowned Croatian mountaineer Stipe Božić who has twice summited Everest along with several other notable climbs in the Himalaya and Karakoram. He has also scaled K2 and completed the seven summits. Despite being mostly in Croatian, Božić’s address included lots of photographs from his many expeditions and proved thoroughly entertaining.

The third day was the toughest of the trek and began with a steep ascent through a forest, then manoeuvred through dense beech woods where the canopy overhead created a close, almost stifling, atmosphere.

Fallen trees and dense foliage made progress excruciatingly slow at times. The airless heat had me drenched in sweat in no time. Several steep ascents and swarms of mosquitos made the mid-morning breakout into open grassland a welcome relief.

Once out of the forest, I sat in the sunshine and enjoyed a cool breeze, drying out for longer than I needed, but I was in no rush. The afternoon included several steep ascents, but was over more exposed upland areas. I took another break at the impressively modern Šugarska Duliba mountain hut and took in its picturesque views.

A few shots from around Panos

Mid afternoon, I arrived at Panos checkpoint – bedecked with Nepali prayer flags and a fire pit – and enjoyed my complimentary beer before pitching my tent. The stamp for that checkpoint was located on the summit of Mt Panos, a short walk away at the top of a rocky outcrop that was once a military post. Striking panoramic sunset scenes offered a just reward for the day’s exertions.

Initially, the trail continued through rugged upland meadows dotted with unusual rock formations. However, the scenery soon transformed again, this time into wide-open pastures with signs of civilisation beginning to pepper the landscape.

The distinctive 100m-high Stapina monolith was the most conspicuous feature of the day. After emerging from a short section of forest, I was confronted by its peculiar shape rising completely unannounced from the surrounding prairie. Its long shadow made for the perfect lunch break.

In the afternoon the scenery opened up into a wide plateau dotted with trees, farmhouses and stone walls. A steady descent led to the hamlet of Veliko Riujno, a collection of farmhouses and a small chapel, the churchyard being our campground for the night.

Day four of the Highlander Velebit

That evening, there was almost a party atmosphere among hikers who took comfort in the knowledge that the hard yards were no longer ahead. There was a presentation that evening from two members of the Croatian Mountain Rescue Service. The presentation was in Croatian but several members of the audience were happy to help out with translating for the English speakers.

The final day included one last 300m-ascent before descending for the majority of the last few hours through Paklenica National Park to the beach at Starigrad-Paklenica. En route, there were several mountain lodges where hikers could pause for a cold drink, snack or hot meal, although most opted for beer!

The final trail section descends via Velika Paklenica gorge, a steep-sided canyon known for its rock climbing and cave system. After exiting the gorge there were a few kilometres of tarmac before arriving at the finish line, located right on the beach at Starigrad-Paklenica.

After receiving medals, certificates and final stamps, hikers dived into the cool Adriatic for a refreshing dip before making a beeline for one of the bars that line the beach.

Highlander Adventure’s trek across Croatia’s Velebit Range was a new way of hiking for me. The logistics were taken care of and I could still appreciate the freedoms that come with trekking independently. The added bonus of having to carry a bit less weight in my pack, not have to think about meals, route plan or search for suitable campsites every day gave me more freedom to hike my own hike and enjoy the landscape.

As I said above, the Highlander Adventure strikes a fine balance between guided trek and self-sufficient expedition. The unique approach to hiking has the potential to be expanded to almost any wilderness in the world.

With new routes added for next year’s calendar, I can see myself returning for a new Highlander Adventure year after year.

At the beginning of the trek, hikers are supplied with a waterproof map case containing custom 1:30,000 topographical maps covering the entire route. The maps include a suggested route, checkpoints, bivouacking sites and water sources.

Downloadable GPS files are also made available via email before the hike. This year’s GPS file is available here for use via a hiking app or you can save the above Google map to your device or account.

What: Trekking the Highlander Velebit in Croatia.

Where: There are four designated campsites, all located at the checkpoints along the trail. However, it is possible to camp anywhere en route. The advantage of pitching at the designated spots is that there is fresh water available, guaranteed flat ground and the promise of a beer and company for the evening.

Hot meals are also provided at checkpoints two and four (Baške Oštarije and Veliko Rujno) where hikers also collect their food for the following days. Hikers are responsible for carrying all their equipment and food throughout the trek.

When: September is an ideal time to hike in Croatia as it is cooler during the heat of the day, but still warm enough to enjoy a dip in the sea at the end of the trek. This year the Highlander Velebit ran from 12th to 17th September. Next year’s event is scheduled for 25th to 30th September 2021.

It’s also a good time of year to visit Croatia and the Adriatic coast in general as it’s naturally quieter and cheaper throughout the region compared with the high summer season.

How: The logistics, including internal transfers to and from trailheads, route, food, maps and campsites are all arranged and include in the price. Hikers only have to organise their travel to Senj, post-hike onward travel and their personal gear including a tent or shelter. Hikers may wish to take some additional snacks.

The Highlander website includes information on how to register as well as more details regarding checkpoints, equipment and some basic guidelines for hiking in the region. More information including joining instructions is available following registration.

It’s essential that hikers follow the Leave No Trace code of conduct. Take all waste and litter with you for the duration of your trek and bury any human waste. There are toilets at the first and second checkpoints (Skorpovac and Baške Oštarije) but not beyond that until the final day.

Most hikers aim to arrive in Senj on the Adriatic coast the day before the trek begins. Buses are organised to take hikers from Senj to at Zavižan where the trek begins. There are several buses running from Zagreb to Senj every day. The journey takes about 3.5 hours and costs €17 ($20 USD).

The hike finishes at Starigrad-Paklenica where there are several buses available to Zagreb, Dubrovnik, Split and Zadar. Use putovnica.net to find routes and book tickets.

There are limited accommodation options in Senj while Starigrad-Paklenica has a much wider choice including beachside resorts, hotels and campsites. Use Booking.com to find the best prices.

Hikers can also band together to organise transport and car shares by visiting the Highlander Forum or Facebook group as well as handling other logistics, gear and routes.