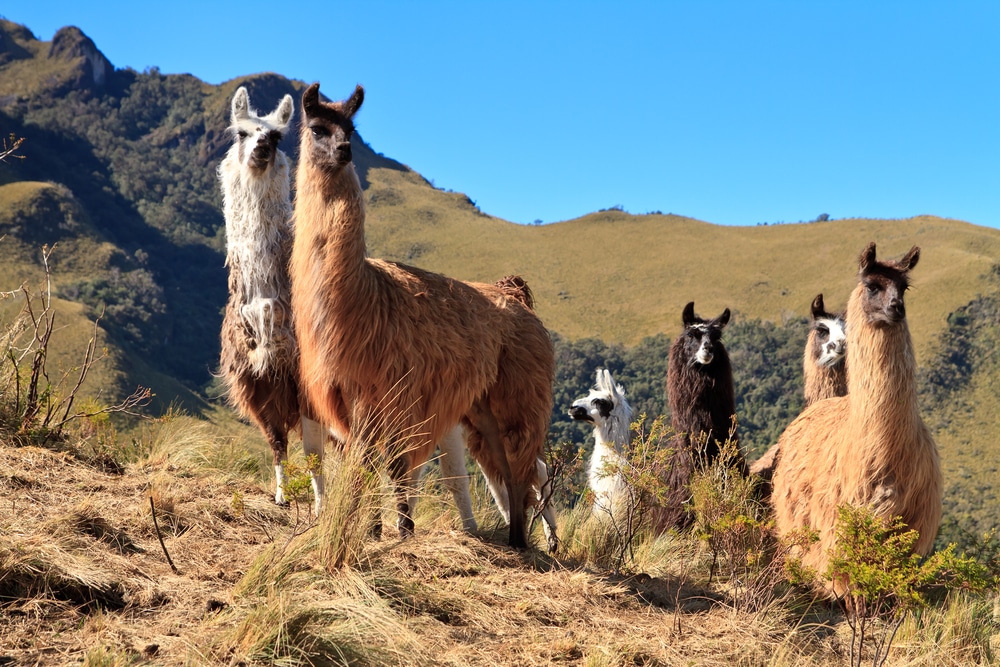 Despite its relatively small size compared with local giants Brazil and Argentina, Ecuador is home to an astounding array of wonders that include picturesque colonial towns, the Amazon rainforest, the spectacular peaks of the Andes and of course the fragile but alluring Galápagos Islands.

What is Ecuador famous for? Whether it’s nature, wildlife, culture, anthropology or language, this diverse country is sure to impress.

Here are the most interesting facts about Ecuador we picked up on our journey through its lands (and seas).

1. The national tree of Ecuador is the cinchona tree which produces Quinine, the first drug used to prevent and treat malaria.
(Source: Britannica)

2. Ecuador is one of only two countries in South America that does not share a border with Brazil.
(Source: Google Maps)

3. In April 2019, Ecuador granted political asylum to WikiLeaks founder Julian Assange. Under investigation by the US government and facing extradition to Sweden, Assange sought refuge at the Embassy of Ecuador in London.
(Source: Telegraph)

4. In April 2019, Lenin Moreno said the country had “reached its limit on the behaviour of Mr Assange” and invited British police into the embassy in London where the Wikileaks co-founder was finally arrested.
(Source: BBC)

5. In 2008, Ecuador was the first country to officially recognise the rights of nature. Rather than treating nature as property, Ecuador recognises that nature has constitutional rights and has the “right to exist, persist, maintain and regenerate its vital cycles.”
(Source: Rights of Nature)

6. The summit of Mount Chimborazo, Ecuador’s highest mountain, is the point on Earth closest to the sun. Due to the mountain’s location along the equatorial bulge, its summit is the farthest point from the Earth’s core. This also means that Ecuador is the closest country to space.
(Source: Smithsonian Institution)

7. Ecuador is one of 17 megadiverse countries in the world and has the most biodiversity per square kilometre of any nation.
(Source: Conservation International)

8. What is Ecuador named after? It is well known that Ecuador is named after the equator which runs through the country. It is in fact the only country in the world officially named after a geographical feature. The official name, República del Ecuador, translates as “The Republic of the Equator”.
(Source: Encyclopedia.com)

9. The equator is widely promoted at the tourist attraction Ciudad Mitad del Mundo (Middle of the World City) 26km north of the capital, Quito. This is supposed to be where one can stand with one foot in the northern hemisphere and one in the southern. Unfortunately, thanks to modern re-measurements the exact equator is said to lie 240 meters north of the marked line and monument. Doh!
(Source: World Geodetic System)

10. Quito, Ecuador’s capital city, is 2,850m above sea level, making it the highest official capital city in the world. La Paz in Bolivia is higher but it cheats a little as it is not the constitutional capital (that’s Sucre), only the seat of government. Nothing’s ever simple in Bolivia!
(Source: Wikipedia)

11. Charles Darwin visited Ecuador’s Galápagos Islands in 1835 and largely based his theory of evolution on the discoveries he made there.
(Source: Darwin Online)

12. Guinea pig, known as ‘cuy’, is considered a delicacy in Ecuador, its consumption is seen as an ancient tradition. After Kia’s reaction to me eating reindeer heart in Finland, I thought it best to refrain…
(Source: BBC)

13. Ecuador is one of three countries created in 1830 following the collapse of Gran Colombia. After independence from the Spanish colony, the Viceroyalty of New Granada, the short-lived republic of Gran Colombia (1819–30) was created. It included the territories of present-day Colombia, Venezuela, Ecuador and Panama as well as parts of northern Peru, western Guyana and northwest Brazil.
(Source: Encyclopædia Britannica)

14. Ecuador’s flag is made up of three stripes of yellow, blue and red with the coat of arms in the centre. The flag is based on the flag of Gran Colombia, with yellow representing sunshine, grain, and mineral wealth; blue the sky, sea, and rivers; and red the blood the patriots spilt in the struggle for freedom and justice.
(Source: CIA World Factbook)

15. In order to distinguish it from the Colombian flag, Ecuador’s flag also features the country’s coat of arms. The design includes a condor, a shield with snowcapped mountains, a river, a steamship and a sun, as well as a wreath, hanging flags and a fasces (a bundle of rods with a projecting axe blade).
(Source: Encyclopædia Britannica)

16. Ecuador is the world’s largest exporter of bananas, accounting for up to 29% of all bananas exported in 2011.
(Source: FAOstat)

17. Ecuador was voted as the best country for expats for two years running in 2014 and 2015. It consistently ranks among the top ten countries, ranking 8th in the latest index in 2019. Quality of life, cost of living and personal finances were all cited as excellent reasons to up sticks and head to the equator.
(Source: InterNations)

18. The Panama hat is actually from Ecuador. Straw hats woven along the Ecuadorian coast were taken to Panama initially to be sold to canal workers and, after the canal opened, to affluent westerners passing through the Panama Canal.
(Source: Montecristi Panama Hats)

19. One of the most interesting facts about Ecuador’s culture is that there are at least 14 recognised languages spoken in the country. Spanish is the official language while 13 indigenous languages are also recognised including Quichua and Shuar
(Source: CIA Factbook)

20. Ecuador is divided into four main and unique geographic regions: La Costa or “the coast”, La Sierra or “the highlands”, La Amazonía also known as El Oriente or “the east” and La Región Insular, the region comprising the Galápagos Islands.
(Source: National Geographic)