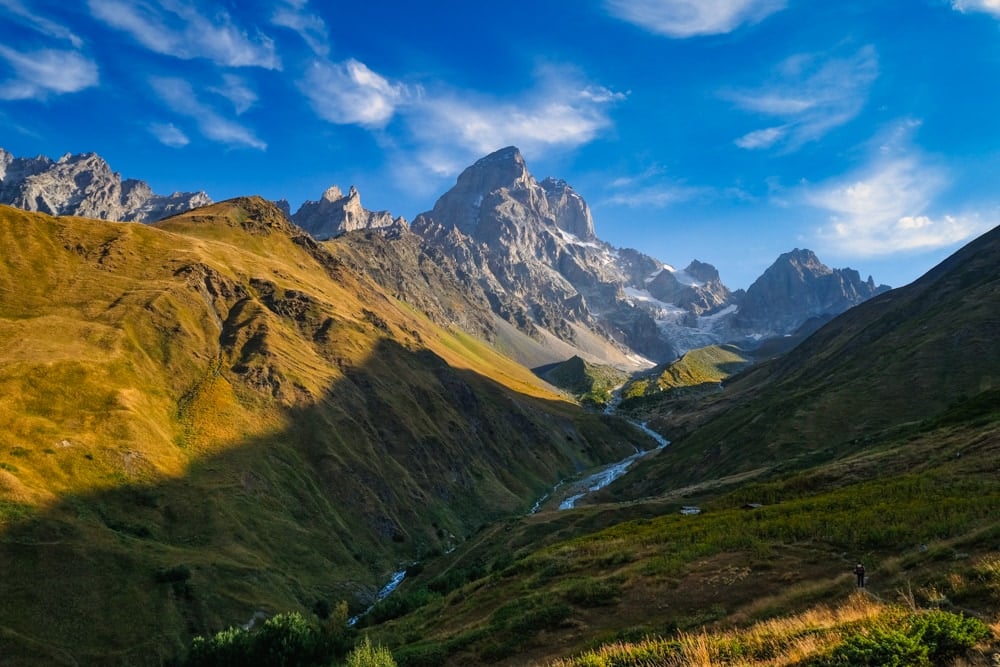 We share the most interesting facts about Georgia, collected on a two-week trip through the transcontinental country

Georgia may as well be called “Georgia, the country” thanks to its famous American counterpart. Unlike the US state, the country still feels uncharted. Bordered by Russia to the north, Azerbaijan to the east, Armenia and Turkey to the south, and the Black Sea to the west, Georgia is a land of deep green gorges, snow-capped summits and implausibly-placed medieval churches.

It’s also a place of rich culture and history, as Peter discovered on his recent trip through the country. Below, he shares the most interesting facts about Georgia gathered on his two-week journey.

In the late 1990s and early 2000s, archaeologists found 1.8m-year-old human skulls in the town of Dmanisi in Georgia – the oldest anywhere in the world outside of Africa. In 2022, they found a 1.8m-year-old tooth in the region, cementing Georgia as home to the first known humans in Europe (and indeed anywhere outside Africa).
(Source: The Guardian)

The world’s deepest-known cave is in Georgia

Veryovkina Cave in the Gagra Mountain range of the western Caucasus is the deepest cave in the word, reaching a mind-boggling depth of 2,212m (7,257ft).
(Source: National Geographic)

Georgia is the birthplace of wine

Stone Age farmers in southern Georgia were the world’s earliest-known winemakers. Analysis shows that they were producing wine on a large scale as early as 6,000 BC. To put this in context, prehistoric humans of the time were still using tools made from stone and bone.
(Source: National Geographic)

Georgia has a coveted position between Europe and Asia

Georgia sits at a strategic crossroads between two continents and, as such, has been fought over by Persia, Turkey and Russia. It was annexed by Russia in 1801-04 and gained independence nearly two centuries later in 1991.
(Source: BBC)

Georgia’s troubles did not end with independence. It has two breakaway regions: Abkhazia and South Ossetia. The Georgian government and most United Nations member states consider both regions legally a part of Georgia. Only Russia, Venezuela, Nicaragua, Nauru and Syria consider them sovereign states.
(Source: BBC, GOV.UK)

Georgia has a history of blood feuds

One of the most interesting facts about Georgia is that it has a history of blood feuds, described in the dictionary as ‘a lengthy conflict between families involving a cycle of retaliatory killings’. Although the ancient custom is now outlawed, it is still practised in some areas of the country.
(Source: UNHCR)

In Svaneti, houses were built with individual fortifications

In Svaneti, a historic province in northwestern Georgia, you will find a landscape littered with ‘tower houses’, unique structures that served as homes as well as defence posts against invaders in the region. It was difficult to protect entire villages so homes were built with individual fortifications.
(Source: UNESCO)

Georgian is one of the most unique languages in the world

Georgian bears no similarity to any other language other than those that branched from it and developed alongside it – namely, Svan, Mingrelian and Laz, which together form the Kartvelian languages.
(Source: Britannica)

Georgian is one of only 14 existing scripts in the world

One of the most interesting facts about Georgia is that although there are more than 7,000 extant languages in the world, there are only 14 unique scripts – and Georgian is one of them.
(Source: Embassy of Georgia)

Many assume that the Alps are the highest mountain range in Europe, but the Caucasus Mountains which stretch along the border between Georgia and Russia are are actually higher. While Russia is home to the tallest peak in Europe (Elbrus at 5,642m / 18,510ft), Georgia’s Shkhara at 5,193m (17,037ft) is almost 400m higher than France’s Mont Blanc!
(Source: National Geographic)

At 2,100m (6,900ft) above sea level, the ancient villages of Ushguli in the mountainous region of Svaneti are the highest settlements in Europe.
(Source: BBC)

Joseph Stalin was born in Georgia

Joseph Stalin was born in Georgia, in 1878 in the city of Gori – then a part of the Russian Empire. The Joseph Stalin Museum in Gori is dedicated to the dictator’s life.
(Source: BBC)

Katie Melua was born in Tbilisi in 1984. The singer left Georgia when she was eight years old but still has strong ties to the country. Her 2016 album In Winter was recorded in Georgia and featured the Gori Women’s Choir.
(Source: BBC)

Abkhasia is known for its population of 100-year-olds

It’s said that there are more healthy centenarians in the Caucasus than anywhere else in the world. The Abkhasia region is particularly famous and was profiled in a 1971 article in The New York Times.
(Source: The New York Times)

Vardzia in Georgia is described as a ‘fortress-monastery-palace complex’ carved into Erusheti Mountain. The 6,000-room cave city was built as a refuge against the raiding Mongol Empire and had a bakery, a church, wine cellars, an irrigation system and royal apartments.
(Source: The Guardian)

There is a Georgian song in space

Georgia is said to be the world’s second Christian nation

Georgia was one of the earliest countries to adopt Christianity as its state religion: in 337AD, second only to Armenia in 301AD.
(Source: BBC, BBC)

St George is the patron saint of Georgia

St George is the patron saint of Georgia. While the country isn’t technically named after the saint – ‘Sakartvelo’ is its native name – the English name is thought to have been derived from the saint.
(Source: Britannica)

The Georgian Orthodox Church – followed by the majority of Georgians – uses the old Julian calendar for religious holidays. As such, Christmas is celebrated on 7th January instead of the traditional 25th December.
(Source: The Guardian)

Georgia is a biodiversity hotspot

Georgia is one of the most biodiverse places in the world and has almost every type of climate, from subtropical and alpine to semi-desert. Dense forest covers 40% of the country and is populated by lynxes, bears and a small number of leopards.
(Source: Conservation International, CEPF, WWF)