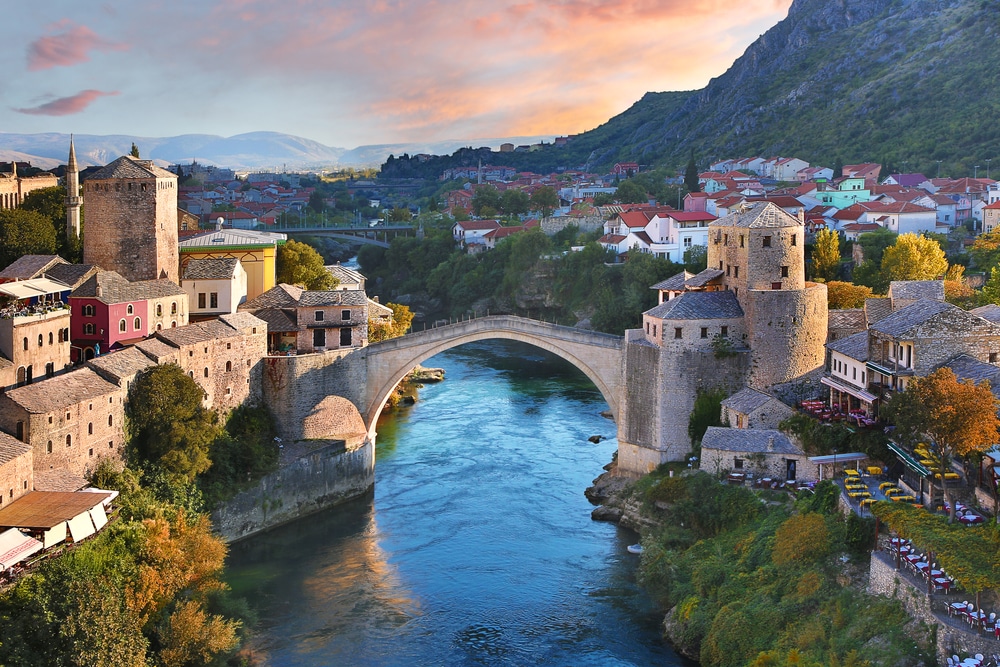 If I had read Minarets in the Mountains in my youth, I would have almost certainly felt differently about my religion. My parents were Bangladeshi immigrants to the UK and in an effort to cling on to their identity, followed a highly prescriptive version of Islam that wasn’t very much fun.

Had I – or they – read a book like this, we might have felt more secure about our place in the world. The problem is, of course, a book like this did not exist until Tharik Hussain wrote it.

The author and travel writer has ​written several travel guides including Lonely Planet Saudi Arabia, which was shortlisted for a 2020 Travel Media Award. He is the presenter of the award-winning BBC documentary America’s Mosques: A Story of Integration and has two decades of experience as a specialist in Muslim heritage.

In Minarets in the Mountains: A Journey Into Muslim Europe, Tharik sets off with his wife and daughters around the Western Balkans – home to the largest indigenous Muslim population in Europe – to explore a region where Islam has shaped places and people for more than half a millennium.

Tharik and his family visit Islamic lodges clinging to the side of mountains, pray in mosques older than the Sistine Chapel and learn lessons about their own identity as Britons, Europeans and Muslims. Here, Tharik tells us about the travel that changed him.

We don’t often hear about Europe’s indigenous Muslim communities. Why is that?

The idea of an indigenous Muslim identity in Europe – one that is born in and of Europe – is to admit Europe is as Muslim as it is Christian, Jewish or pagan (and everything else).

This disproves the far-right, Islamophobic narratives that are being normalised, which claim Islam is something new and alien, yet anyone that knows their Islamic history knows that it was in Europe more or less at the same time as it appears in the Middle East: the 7th Century, and it has never left.

Another reason this is not a normal part of our discourse – especially in our genre of travel writing in the English language – is because the writers who have historically written about these people and this region have not been Muslim and therefore seen it as that ‘other’ Europe; the result of a foreign presence if you will – a nonsensical trope that is still being repeated fourteen centuries on.

What’s the most surprising thing you learnt while writing the book?

How surprising the idea of an indigenous Muslim Europe is to people, and not just Europeans. I have spoken to people and media across the globe and it is a bizarre concept to them – the idea of a living European Muslim presence that is not the result of post-colonial migration.

I have also been surprised by how much of what I discovered challenged my own – admittedly more empathetic – notions of what this region would be like, in that it was a far cry from the popularised image of a grey, monolithic former soviet bloc.

It was rich in diverse histories, colourful, exciting, creative and extremely beautiful, and of course, filled with Muslim heritage that I had thus far been denied, be that the region’s uniquely European-Muslim art style or the Muslim tradition of protecting the oppressed (Jews of Europe).

What were some of the joys (and challenges) of travelling with two young daughters?

The joys are the perspectives they bring to where we go and what we see. I am a Bangladeshi-born, middle-aged British man. They are two mixed-race teenage girls. They see and experience the world very differently and remind me of the privileges and marginalisation I am blind to. They also have that wide-eyed wonder many of us lose with age and the onset of cynicism that comes with it.

The challenges are like those encountered travelling with anyone for a length of time. The intensity of it, accommodating everyone’s whims, putting up with each other’s personality traits etc – nothing out of the ordinary because they are genuinely wonderful company!

Let’s move on to the travel that changed you. What region or trip impacted you most?

Given the book I have just written, it would probably have to be a stopover in Cyprus on my way to Saudi Arabia. We were about to move there as a young family convinced we didn’t belong in Britain and Europe, and booked a short trip to perform the umrah (mini pilgrimage) and effectively ‘recce’ the country ahead of a move.

As two broke young parents, the only flights we could afford included a lengthy layover in Larnaca – around nine hours I think. Wishing to kill time, I looked up places of interest nearby and came upon a mosque on salt lakes. This sounded enticing and upon arrival, off we went in a taxi for a short day trip.

I remember arriving at this decrepit and neglected old place – long before the recent renovations – and the elderly caretaker coming out of his dusty and lonely booth to hand me a small thin booklet called The Tekke of Hala Sultan.

I didn’t think much of it, and put the book in my bag. We wandered around the dimly lit and poorly maintained Ottoman-era mosque, surrounded by palms overlooking the August sun-baked salt lakes. My wife and I were rather put out to come upon a tomb inside the mosque complex.

At the time we were leaning towards a conservative Islam – we were heading to Saudi after all – and the idea of tombs next to places of worship was a no-no.

We left, pushing my daughter Amani in her buggy, a tad disappointed but glad to have killed a few hours. However, years later, after leaving life in Saudi Arabia disillusioned, I opened that book to realise that the mosque and its accompanying tomb was reportedly the site where an aunt of the Prophet Muhammad had been buried.

I realised that an aunt of the Prophet had come to Europe and nobody had bothered to tell me. I concluded that I did belong here and set out to prove it with the work I have tried to do since.

Backpacking through Indochina – Thailand, Vietnam and Cambodia – as a family. My daughters were of an age where they could carry their own backpacks and although some of our time in Thailand was spent travelling around in a hired car, the majority of this trip saw us wander the region by trains, tuk-tuks, buses, boats, ferries and the odd aeroplane, as we introduced them properly to the experience of independent travel.

We stayed on little-known beach islands in huts on stilts, wandered through the temples of Angkor Wat, spotted herds of wild elephants in their natural habitats, ate the most delicious local food and of course visited places of Indochinese indigenous Muslim culture for a whole summer. It was just bliss.

Of course. Too many to list! But travelling the Silk Road and through South America are probably right up there. I rarely want to ‘do’ any one place.

I’m always somewhere in between. I like a loose itinerary to follow, but I also love the freedom to say ‘scratch that’ or ‘this looks interesting, shall we stay here a bit longer?’

When travelling alone, hostels for the interesting folk and atmosphere. When I’m just with my wife, it is nice hotels – and a mix when we’re all together. As for camping, I like it but she’s not so keen.

Solo: on assignment exploring Muslim Thailand, being able to really immerse myself in the local culture in a way that is impossible on just a holiday. Coming upon the physical ruins – Tomb Raider style – of long-neglected Thai Sultanates on overgrown jungle-covered hills and breaking fast with Thai Muslim Sufis during Ramadan are just two moments from that trip that really stand out.

Family: backpacking through Indochina for the reasons I have described above.

How many reasons do you want? I don’t think it is any coincidence that almost all the ancient mystical traditions across all the faiths encourage those seeking wisdom to wander the earth. I think travel has a powerfully transformative effect on our very being, whether you believe in a soul or not.

We really begin to know ourselves; we learn to detach ourselves from over-reliance on the world; we are humbled; we become more appreciative of what we do have; we recognise our own insignificance in the great cosmos… That’s the deep answer.

The shallow one: the world and the people in it are just so damn beautiful!

In Minarets in the Mountains, Tharik Hussain sets off with his wife and young daughters around the Western Balkans to explore a region where Islam has shaped places and people for more than half a millennium. Along the way, they visit Islamic lodges clinging to the side of mountains, pray in mosques older than the Sistine Chapel and explore the historical roots of European Islamophobia.