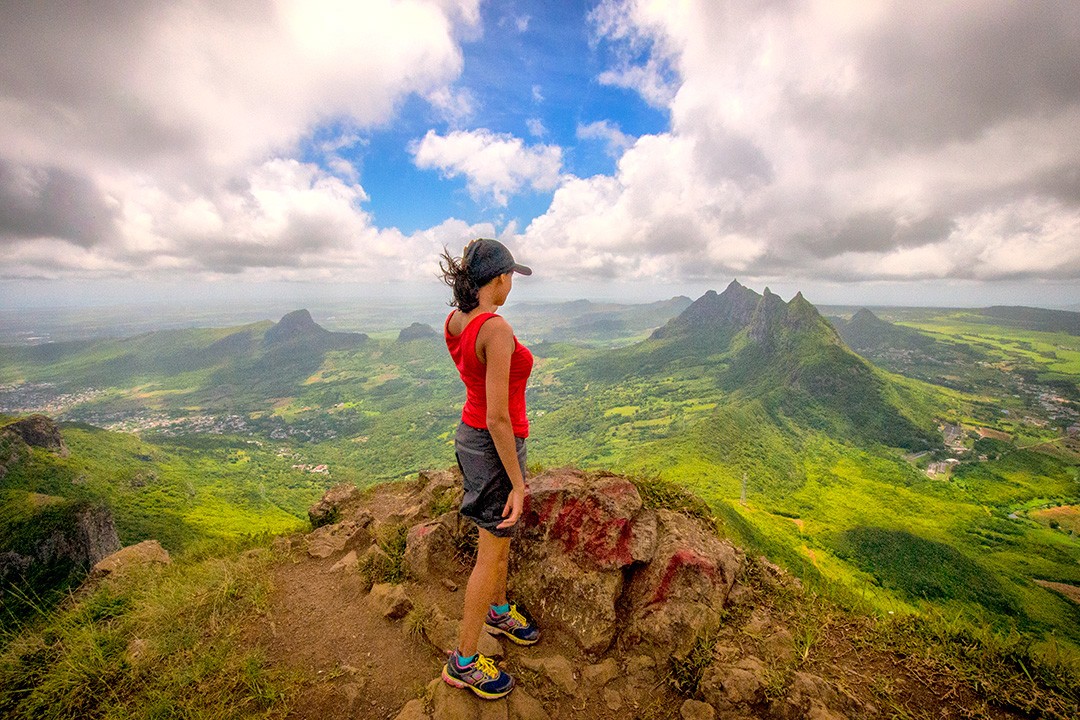 Le Pouce is located near the island’s capital city, Port Louis, and offers incredible views of the surrounding area. The mountain’s relatively central location on an island that’s only 45km (28mi) wide and 65km (40mi) long means it’s possible to see much of the island from the summit and its slopes. Hikers can see the northern coastline along with islands that lie off its shores.

Throughout the hike there are striking views of the Moka Range including the country’s second highest peak, Pieter Both, with its uniquely shaped rock formation at the summit which resembles a human head. To the south are sprawling views of the more urban district of Plaines Wilhems.

Le Pouce, despite being closer to the more urban areas of Mauritius, does not seem to be as popular as the hike at Le Morne. We only encountered two other pairs of hikers during our ascent.

The start of the trail for hiking Le Pouce is located in Petit Verger near the village of Saint Pierre in the Moka region. The trailhead is not well sign-posted or particularly easy to find unless you have a map. We followed a local’s directions and parked at what seemed to be a makeshift carpark – just enough room to fit four to five cars.

The trail initially leads up through sugarcane fields before entering the welcome cool of a small forest. The path then switches back on itself once or twice as it gains altitude and passes the odd shrine cut into the rock face. As the trail emerges from the trees it zig-zags across bare rock on the eastern side of the mountain before entering a more grassy ascent to the right of the summit.

When you encounter crossroads in the trail, always choose the path to the right ensuring you keep the summit to your left. Just below the summit there is a small plateau which is a great spot at which to pause and enjoy the stunning views across Pieter Both and the Moka Range.

The final part of the hike is through a small meadow followed by a short but slightly challenging scramble to the summit where you can enjoy a refreshing breeze, a gulp of water and some of the best views in Mauritius.

What: Hiking Le Pouce in Mauritius.

Where: We had a three-night stay at Trou aux Biches Beachcomber on the northwestern coast of Mauritius. The hotel is slightly larger than what we normally opt for, but we were lured there by the beach, good diving, and what we heard was one of the best Indian restaurants on the island (68% of the local population are of Indian descent so we were expecting some amazing cuisine).

We’re glad to report that the food was indeed impeccable. Mahiya offered some of the best curry we’ve eaten and, despite the fact that there were six restaurants on site, we ate there two nights in a row (booking ahead is essential).

The hotel itself has pretty much everything you could need: tennis courts, a spa, sports centre and of course plenty of beach loungers!

How: We hired a car from Port Louis and drove to Petit Verger near the village of Saint Pierre. There is a small paved road that leads off the corner of the B47 road and heads up to the small car park for accessing the Le Pouce hiking trail. There are buses that serve the area which are relatively easy to find in the capital of Port Louis. Use the Mauritius Buses website to plan your journey.

We had a long stopover before our connecting flight from Kuala Lumpur, so bedded down for the night at a private resting suite at Plaza Premium Lounge inside the airport – a godsend given that I was recovering from a Burmese bug and that the alternative would have been eight long hours on less-than-comfy chairs.