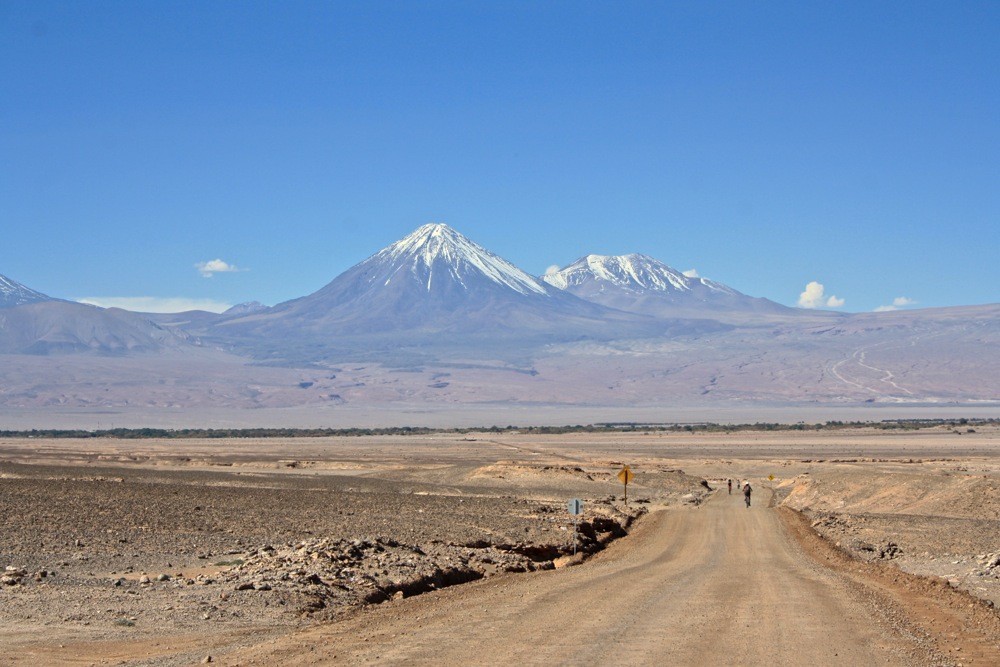 The Atacama desert is the driest place on Earth and possibly the world’s oldest desert. We take a 30km bike ride across its dramatic landscape

Our journey to Atacama was far more complicated than expected. Up to that point, the border crossings on our journey had been relatively straightforward so we were surprised there was no direct route from Uyuni in Bolivia to Atacama in Chile.

Instead of taking a bus, we had to book a $50 USD transfer, spend a night in a room that was almost exactly like a prison cell, take the transfer to the border, pay another $20 to enter the national park and then take another transfer on the other side. All in all, a journey that can be done in nine hours took about 24 hours instead.

When we got to San Pedro de Atacama, we were humming with delight. Finally, after Bolivia’s relentless chill and unforgiving altitude, we could now enjoy unbridled sunshine and warmth. Our driver turned to us and grinned. “Más bajo, más caliente,” he said. Lower and hotter indeed.

Not only is Atacama Desert blissfully low, hot and dry, it’s actually the driest place on Earth. This strip of land 1,000km (600mi) along the South American Pacific coast averages about 15mm (0.6in) of rainfall per year (compared to 106mm (4.2in) in Las Vegas).

Periods of four years have been registered with no rainfall in the central sector and some weather stations haven’t received any rain at all, ever. Many of its mountains over 6,000m are completely free of glaciers, a testament to the extreme aridity of the area. Moreover, theories suggest that Atacama is the oldest desert in the world. Naturally, we had to see it.

We based ourselves at Hotel Takha Takha, a mid-range hotel with a lovely camping area shielded by trees. The town of San Pedro is small and charming with one-storey adobe houses, unpaved streets and a decent selection of cafes and restaurants. There is a wide range of tour operators but we opted to hire bikes and go it alone.

On day one, we visited Valle de la Muerte which gave me time to practise cycling in the intense desert heat. (For those who don’t know, I only recently learnt to ride.)

3km from San Pedro, Valle de la Muerte comprises fascinating red rock formations reminiscent of Turkey’s Cappadocia as well as an array of narrow gorges and 150m-high sand dunes. We spent the day cycling, climbing and watching sandboarders attempt to stay upright while soaring down the length of the dunes.

The next day began with a debate: could I handle a 28km round trip to Valle de la Luna and back? As I said in 15 crazy roads from around the world, Peter has seen me fall off my bike several times over the course of the last six months and is always cautious when I suggest cycling beyond my skills.

We asked several locals about the road to the valley and were told that much of it is flat but begins to undulate steeply once inside the complex. Plucking up courage, we decided to give it a go.

As feared, the road began to challenge me once we entered the complex proper. An hour in, I had to tell Peter to go ahead without me as I really couldn’t bear the searing heat and steep inclines.

I tried to walk on after him but it was very slow progress. After 30 minutes or so, he returned, breathless and exhausted. We decided to stop for our packed lunch and then tackle a nearby cave.

Thankfully, I took my cycle helmet with me; it served me well when navigating the narrow spots and low ceilings of the cave. After 15 minutes, we emerged into a dramatic landscape coated in parcels of not snow but salt. We gulped down half a litre of water and while we baked there on a red rock in the middle of the driest place on Earth, we did what we never thought we’d do: hanker after the chill of Bolivia.

Driest place on earth: The Essentials

What: A two-night stay in San Pedro de Atacama, the gateway to the Atacama Desert, the driest place on Earth. We hired bikes and cycled to Valle de la Muerte on day one (free entrance, 3km from town) and Valle de la Luna on day two ($3 USD per person, 14km from town).

Where: San Pedro de Atacama. We stayed at Hotel Takha Takha which has a charming camping area with warm showers and ultra-clean facilities ($18 USD per person per night). The only downside is lack of access to the kitchen. We resigned ourselves to thawing pot noodles with hot water from the coffee machine in reception.

When: As this is the driest place on Earth, the weather rarely changes from month to month. Go in June for the local Saint’s Day festival or in July for cooler nights.

How: Oy vey. If you’re coming from Uyuni, it won’t be easy. You can either take a $35 transfer as outlined above (includes a one-night stay in a prison-like room followed by an extra $20 fee for entering the national park), or take a bus that avoids the one-night stay and fee, but leaves at four in the morning.

Contact Cordillera Tours to book your place (located close to Hotel Julia on Avenida Ferroviaria in Uyuni). Alternatively, you can fly from Santiago to Calama. Book flights via skyscanner.net.