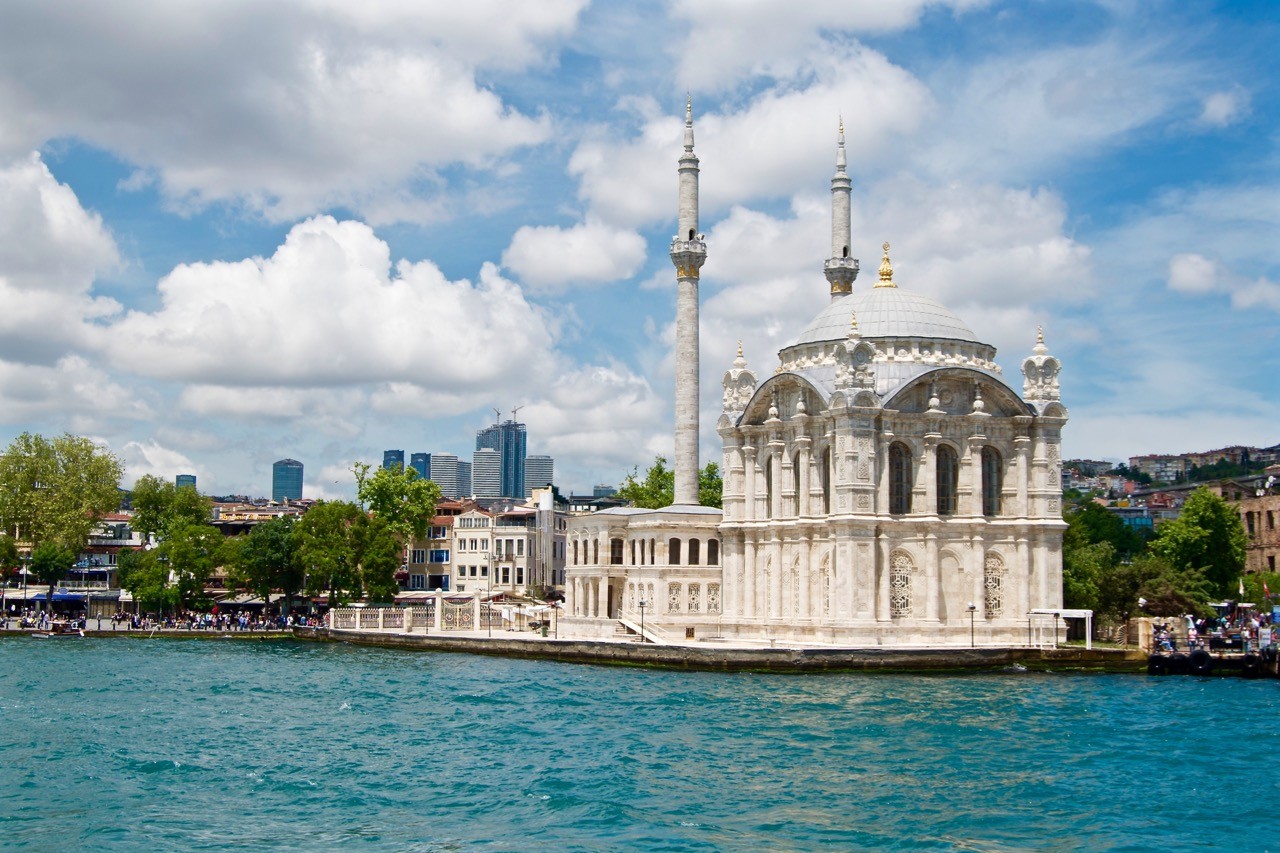 The 32km (20mi) natural waterway of the Bosphorus in Turkey connects the Black Sea with the Sea of Marmara and – by extension via the Dardanelles – the Aegean and Mediterranean Seas. It is one of the most significant waterways in the world and has been for centuries if not millennia of maritime history.

We took a two-hour continuous cruise from the Golden Horn up to the Bosphorus Bridge and back. Here’s the best of what we saw.

The home of the Ottoman sultans for nearly 400 years along with the iconic minarets of the Blue Mosque and Ayasofya are a defining feature of Istanbul’s skyline. Viewed from a Bosphorus cruise boat, the domes of Topkapı’s Harem are clearly visible above the palace’s walls.

In 1110, Byzantine Emperor Alexius Comnenus built the first tower on this tiny islet, albeit just a modest wooden tower protected by a stone wall. Since 1721, the current stone tower has served as a lighthouse and today houses a café.

Sultan Selim III built the grand army barracks in 1800 for the soldiers of the newly established Nizam-ı Cedid (“New Order”). The barracks are perhaps best known for Florence Nightingale, who worked there along with 37 volunteer nurses during the Crimean War (1854-1856).

The barracks were allocated to the British Army and were converted into a temporary military hospital.

The grandest of Ottoman Imperial palaces, Dolmabahçe showcases the very best of 19th-century Ottoman decadence and is everything a palace should be.

Its position on the European shore of the Bosphorus means that those on a Bosphorus cruise get to see the palace’s 500 meter-long shore façade in all its glory.

The former Ottoman palace is now a five-star hotel and quite possibly the most luxurious hotel in the city. The palace has an intriguing history since its construction in 1867.

It was used by parliament briefly before being destroyed by fire in 1910 and then served as a football stadium for Beşiktaş before finally being renovated in 1989 and again in 2007.

One of the oldest and most prominent high schools in Turkey, the Kabataş High School has educated many Turkish politicians along with notable writers, poets and musicians over the years.

Essentially, it’s the Turkish equivalent to Eton College in the UK but, unlike Eton, as of 1994 girls have also been admitted to Kabataş.

Istanbul’s coolest neighbourhood is Ortaköy which translates as “village in the middle”. Its café culture and impromptu street markets define the chic art-boutique neighbourhood.

The village has a long history of cosmopolitanism stretching back to the Ottoman days where migrant communities of Turks, Greeks, Armenians and Jews lived alongside each other.

Situated alongside Ortaköy village, the beautiful and ornate Ottoman baroque-style mosque is perhaps the most eye-catching waterside landmark you’ll see on a Bosphorus cruise.

The mosque is small compared to the city’s other iconic mosques. However, its position on the water’s edge beside Ortaköy’s promenades makes it one of the most striking.

Another palace that may grab your gaze is the “small” Istanbul summer palace overlooking the Bosphorus from the Asian shore. Its two bathing pavilions, one for the harem (women’s) and the other for the selamlik (men’s), can be clearly seen from the Bosphorus.

Opened as a secular university in 1992, this impressive building was originally the Feriye Palace, a coastal summer palace on the Bosphorus built in 1871 for Sultan Abdülaziz.

Courses at the university are taught in three languages (Turkish, English and French) and the institution is widely regarded as one of the most prestigious and notable universities in Turkey.

Ever since the Persian emperor Darius built his bridge of boats across the Bosphorus in 490 BC, rulers of Istanbul have dreamt of a bridge between the continents of Europe and Asia.

In 1973, on the 50th anniversary of the Turkish republic, that bridge finally opened. Today it is one of two suspension bridges spanning the Bosphorus Strait, the other being the Fatih Sultan Mehmet Bridge to the north.

What: Bosphorus Cruise in Istanbul, Turkey.

When: The best time to visit Istanbul is spring (March to mid-June) when the weather is moderate and the days are long. Do note that you may get a day or two of rain, particularly in April. We visited at the end of May and had a day’s washout.

The other days, however, were glorious. Autumn (Sep-Oct) is the second-best time to visit. Summer is hot and crowded while winter can be cold and rainy.

How: There are several ferry companies running Bosphorus cruises from the busy and well connected Eminönü ferry docks. The docks are located on the south side of the Golden Horn at the southern end of the Galata Bridge.

Tickets can be brought for Bosphorus cruises right up until departure, but in peak season it can get very busy so it’s worth booking ahead where possible.

There are a number of companies offering cruises on a range of boats. The following are the most popular and best reviewed:

The docks can be easily reached with a short walk from Sirkeci Mansion Hotel. If staying further afield, you can use Istanbul’s reliable metro system to get around. Taxis are readily available but we preferred to use the far cheaper metro.