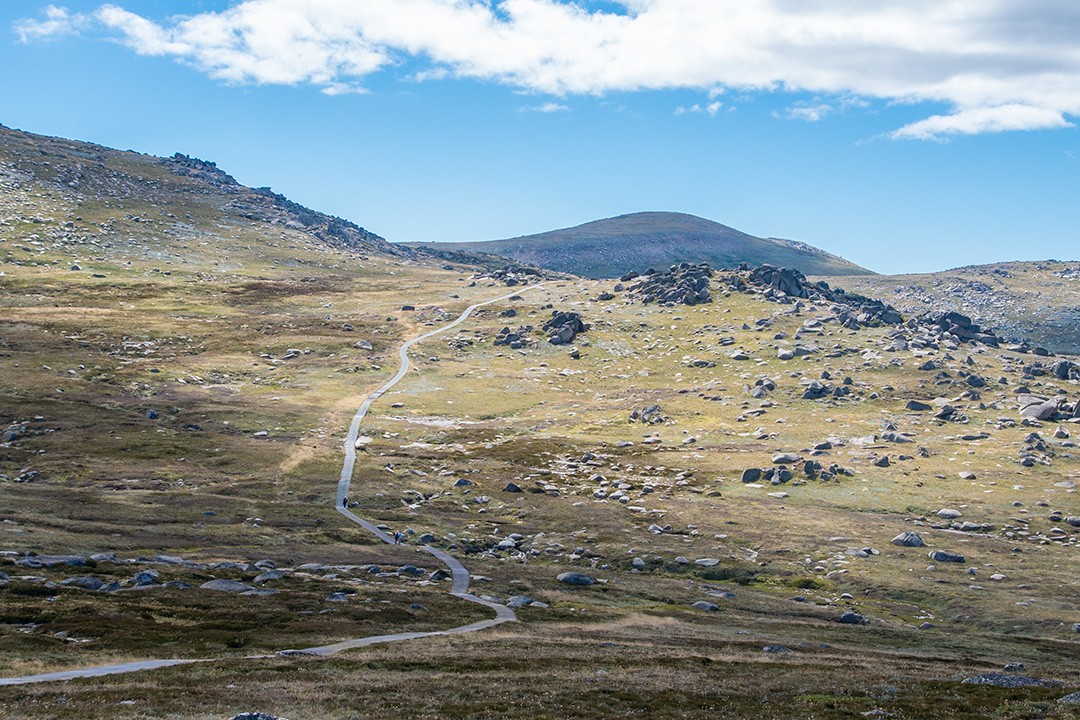 Climbing Mount Kosciuszko in Australia may not be on every visitor’s itinerary, but it’s the easiest way to bag one of the seven summits (sort of)

“So does this really count as one of your seven summits?” Kia asked as we started to break trail.

“Not really. But if I’m on my deathbed and one short, it will have to count,” I replied.

I may have mentioned climbing the seven summits (the highest mountain on each of the seven continents) once or twice or ten times before. I dream of climbing them all, no matter how improbable.

Mount Kosciuszko – seven summit or not?

Finding the time, money and fitness to climb these mountains is not the only challenge. There are two main lists in circulation, named after the mountaineers who first completed them, with slight variations on which seven mountains actually qualify.

There is also a suggestion that the seven summits should be defined using tectonic plates, which would make Mauna Kea in Hawaii the highest mountain on the Pacific plate. But I digress.

Personally, I subscribe to the Messner List which means Kosciuszko is not a seven summit, but when we found ourselves within striking distance of the mountain while driving from Melbourne to Sydney, it seemed only right that we climb it.

We stayed in the alpine village of Thredbo, conveniently located in Kosciuszko National Park in the Snowy Mountains of New South Wales. There are several routes from Thredbo to the summit, ranging from easy to strenuous.

The easiest option involves taking a chairlift up to the Eagle’s Nest, Australia’s highest restaurant, and then joining the Mount Kosciuszko Track to the summit (13km return). Of course, it’s much more fun to take one of the trails leading up the steep side of the valley.

There are several different options, most of which incorporate at least part of the steep Merritts Nature Track. We went all in and chose to climb the entire Merritts Nature Track (4km one way) up to the Eagle’s Nest and join the Mount Kosciuszko Track (13km return) – a 21km round hike in total.

We started around 9.30am after picking up some sandwiches for lunch in the village – and immediately regretted not getting up earlier. It was already hot and the first two kilometres of the hike were punishingly steep.

Fortunately, much of the trail up the side of the valley is through forest and sheltered from the strong sun. There are several shaded picnic spots at which to pause and catch your breath en route, complete with lookout platforms and a cool and welcome breeze.

After sweating our way up the gully side, crossing small streams and darting in and out of the alpine forest we were pleased to make it to the Eagle’s Nest – the terminal of the chairlift. It was rather disheartening watching the chairlifts glide effortlessly above us while we toiled away on the steep track below, but we were pleased to do it on our own steam.

At the Eagle’s Nest, the Mount Kosciuszko Track begins, largely a gentle walk across “the rooftop of Australia”.

The route traverses rocky granite outcrops and rolling alpine meadows of long grass, wildflowers and marshland. There are a couple of fenced lookout platforms and plenty of natural rocky alternatives offering views of the surrounding landscape.

The track continues across the headwaters of the Snowy River before climbing above Lake Cootapatamba and on to Rawson Pass. From here, it’s a final steep climb to the summit of Mount Kosciuszko.

The summit is no jagged peak but more similar to a British fell – albeit several times the height. Regardless, the panoramic views across the Snowy Mountains are splendid and make for a just reward.

It may not be the highest or hardest mountain I’ve climbed, but the fresh alpine air was a real treat after several weeks at sea level. The scenery was in stark contrast to the Australia we had seen so far. The red desert of the Australian outback or the coastal scenery of the Great Ocean Road felt like another country entirely.

After lunch on the peak and our customary summit snaps, we set off down the slopes again. The return hike was easier, but we certainly grew weary by the end, particularly on the final descent along the steep Merritts Nature Track.

We arrived back at our hotel achey and fatigued, but well satisfied. Climbing Mount Kosciuszko was a welcome change to our Australian odyssey. It was good to get into Australia’s higher, cooler air, and bag another summit while at it.

Whether it counts as one of my seven or not, we’ll just have to see.

Where: We stayed at the Thredbo Alpine Hotel in the heart of Thredbo village. The hotel is just a few minutes walk from everything you could need during your stay including all the major trailheads as well as the chairlift terminal. The village itself has a range of restaurants, cafes, bakeries, shops and pubs, all close by.

The panelled rooms are extremely cosy, clean and exactly what you need whether visiting during the winter or summer. The rooms have balconies with views of the surrounding mountain slopes and forest.

You can also choose to stay in a lodge, chalet, luxury apartment or self-contained units. The accommodation section of their website has more information on all available options.

When: The best time for climbing Mount Kosciuszko is from November-May. The summer months from the beginning of December to the end of February are the hottest.

The track is generally snowbound in winter (June-October). Kosciuszko National Park is open all year but some roads and trails can be closed due to weather conditions. It’s worth double-checking before you go.

How: Thredbo is roughly six hours from either Sydney or Melbourne by car or 2.5 hours from Canberra. Entry to Kosciuszko National Park is either via the Alpine Way or Kosciuszko Road, where park offices are clearly signposted.

All visitors must stop at the park office to pay entry fees. Summer park fees per day (24 hours) are as follows. See NSW National Parks and Wildlife Service for winter fees and more information.

We recommend hiring a 4×4 from Hertz Australia. Our Toyota Rav4 provided a super-comfortable way of seeing the best sights en route. We appreciated the freedom of setting our own itinerary – and changing it when we wanted to! As well as their latest offers, Hertz Together provides a range of travel guides, articles and destination ideas.