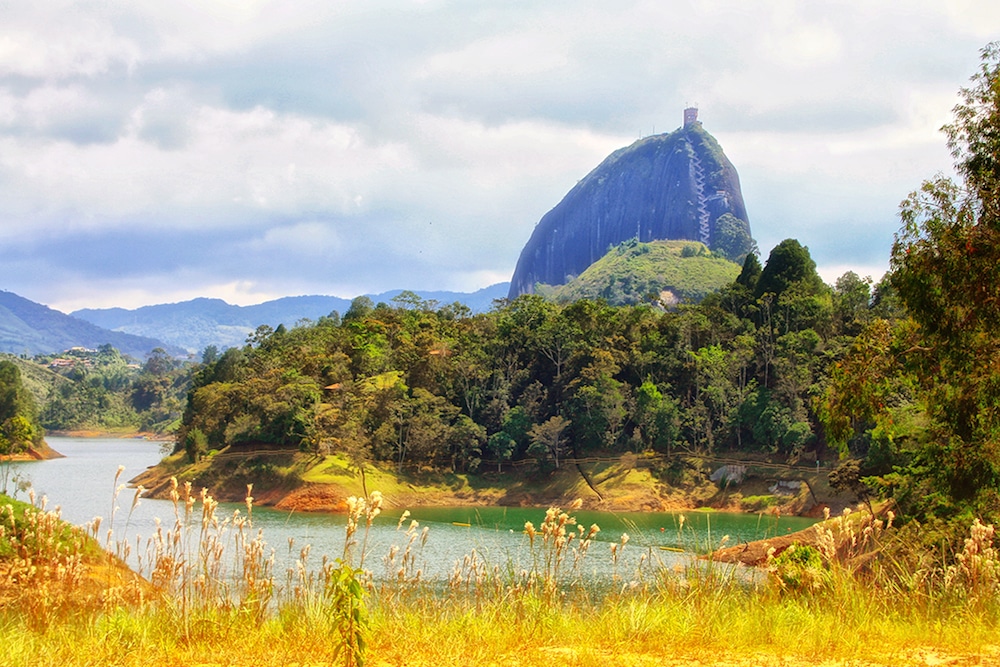 A quaint and charming town awaits you in Guatape with colourful streets and quiet piazzas, while La Piedra Del Penol offers the best views in the land

When I’m about to visit a country for the first time, one of the first things I do is scan a guidebook and pick out a few highlights or must-sees. This can be dangerous business as you’re often putting yourself at the author’s subjective mercy.

When I first scanned our guidebook’s Colombian highlights I saw colonial towns, national parks and coffee plantations. After a month in Colombia, I can safely say that the best day I had there barely gets a mention in the guidebooks.

If you’re in Colombia, I strongly suggest you take the time to visit Guatape and La Piedra Del Penol. A quaint and charming town awaits you in Guatape with colourful streets and quiet piazzas, while La Piedra Del Penol offers some of the best views in the land.

Modern and trendy Medellin has really earned its place in the guidebooks. The proud Paisa city has transformed itself in recent years from the murder capital of the world to a vibrant, thriving city with an interesting cultural scene. We spent a few days there before deciding on a day trip to Guatape based on a recommendation from a friend.

Guatape is a small and sleepy agricultural town about two hours’ drive east of Medellin. The town borders a large reservoir created by a hydroelectric dam in the late 1960s.

Many of the town’s buildings have been colourfully decorated and adorned with murals of the local culture (or sometimes just their favourite football team). There are plenty of pretty plazas such as Plaza Simón Bolívar where you can sit back and enjoy a tasty meal and a cold beer, and watch the world go by.

There are plenty of accommodation options around if you fancy turning your day trip into a long weekend. It looks just the kind of town where a couple of days could easily turn into a week, and so on…

Despite Guatape’s charms, however, it is La Piedra Del Penol that’s the real pull for local and international tourists alike. Resembling Rio de Janeiro’s Sugar Loaf Mountain, “the rock’s” 200-metre summit offers outstanding views out across the unique landscape. However, those views don’t come easy. There are 740 steps on the winding stone staircase and the searing Colombian sun doesn’t help matters.

When stood at the bottom, the foreboding switchback staircase looks like it’ll take hours, but once you get started the steps just fall away – don’t worry, not literally; they’re really very safe! They’re also helpfully numbered every 100 steps, so I promised Kia a rest every 100 to help break it up!

At the top there a few cafes and snack bars offering cold drinks and ice cream to cool you off before you complete the final few steps to the 360-degree viewing platform. The sweeping panoramic views of the emerald green peninsulars really are mesmerising and entirely unique to the area – there’s nothing else like it in Colombia.

We spent a good hour up there just taking in the landscape before taking a quick pause for ice cream. When we asked the poor shop clerk if she climbs the stairs to work every day, she smiled wryly and said yes. Ouch. With that in mind, we complained far less on the way back down.

How to get from Medellin to Guatape

From the north bus terminal (Terminal del Norte) head to ticket counters 9 or 12 where buses leave around every half an hour and reach Guatape two hours later. We visited the town first (only because we forgot to tell the driver to drop us off at La Piedra) but I think it’s better to get the climb done first, enjoy the views and then reward yourself with a good meal and a cold drink in Guatape at leisure.

When you’re within sighting distance of La Piedra, keep an eye out for Zeuss gas station on your right, which is next to the the entrance to La Piedra (and, of course, ask the driver to drop you at La Piedra).

Guatape is about 3km away from La Piedra and there are plenty of tuk-tuk style transports around to take you into town. That said, we walked the relatively quiet road between the two and found it straightforward. The last bus leaves Guatape around 6pm and stops at La Piedra too so you can pick it up from either location.