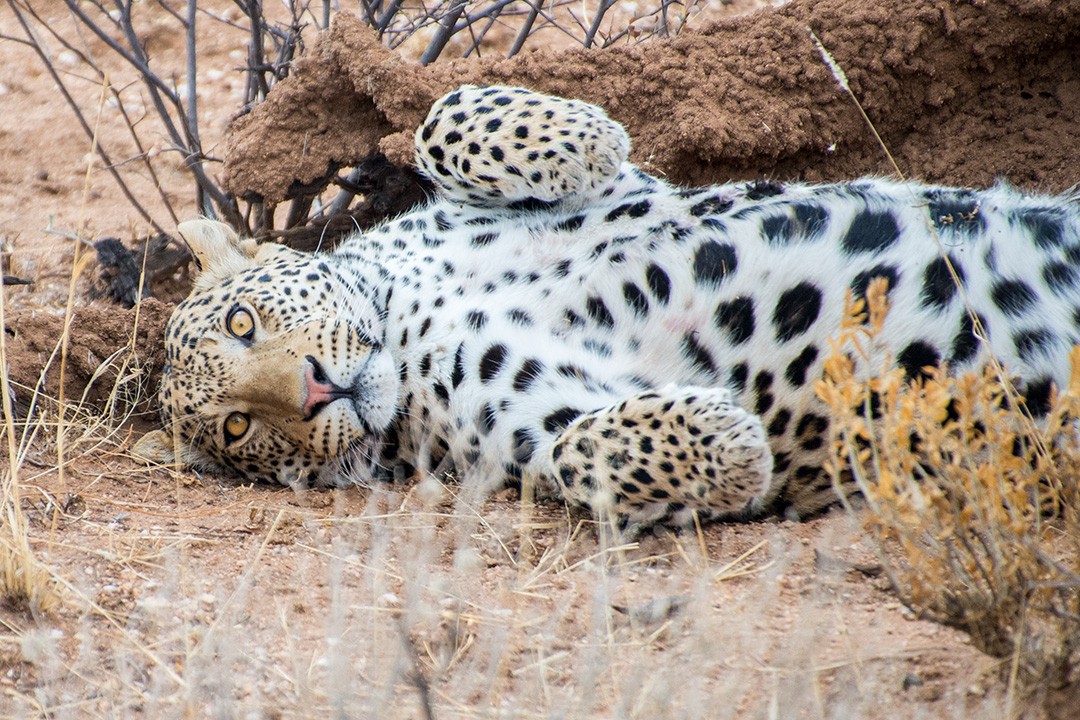 We visit one of the world’s best places to see cheetahs and leopards: Okonjima Nature Reserve in Namibia

I’ll be honest: in theory, I like the idea of staying at an eco lodge; in practice, however, I’m unenthused by the prospect of drop toilets, limp water pressure, poor ventilation that leaves everything a little damp, or open walls that grant entry to bugs. This might explain why I was sceptical about staying at Okonjima Nature Reserve in Namibia.

As stewards of conservation charity AfriCat, Okonjima is exactly the sort of place that might offer imperfect facilities under the banner of Doing Good.

On arrival, however, I realised how wrong I was. Perched by the sandstone Omboroko Mountains, Okonjima offers luxurious lodgings in the secluded wilderness of its very own nature reserve. High ceilings, exposed brickwork and edgy industrial decor create an airy, open feel far removed from what I’d expected.

It’s almost coincidental then that Okonjima is involved so heavily in conservation. The truth is that it started life on the opposite side of the conservation fight: that is, as farmland owned by Rose and VJ Hanssen who settled there in 1970. The Hanssen family raised Brahman cattle and, like other farmers, endured losses from carnivores.

The Hanssens tried to mitigate their farming losses, as did other farmers, by trapping, shooting and hunting leopards. This made little impact: losing 20 to 30 cows a year decimated their herds and led to crushing financial losses, a situation that impacted smaller farms even more. The Hanssens supplemented their income by taking trophy hunters out across their acreage.

Observing this cycle − the decimation and death, the degradation of land and horrendous destruction of large carnivores − the Hanssens’ children, Wayne, Tammy, Roselea and Donna, committed to do better.

The Hanssen family radically switched their focus from farming Okonjima to creating a 200km2 private nature reserve. Their aim was to restore the land to what it once looked like and to protect leopards and cheetahs forced onto farmland from diminishing habitats.

To foster a culture of coexistence, the Hanssens set up The AfriCat Foundation in 1991 to break the vicious cycle of “leopard kills cow, farmer kills leopard”.

As part of its remit, AfriCat educates farmers and schoolchildren, tracks carnivores and warns farmers to rally livestock when one gets too close, and collects carnivores that would otherwise be killed by farmers.

To date, AfriCat has rescued and released more than 1,080 large carnivores comprising 86% of the animals that have passed through its hands. Those that cannot be rehabilitated for various reasons are humanely reared. This is a necessary part of the foundation’s work, but poignant nonetheless. After all, ‘AfriCat’ denotes not just African Cat as I first thought but A Free Cat − the foundation’s ultimate aim in rescuing carnivores.

We had only one night in Okonjima at the very end of our self-drive safari through Namibia and decided to visit AfriCat to learn about its work and see its cats up close.

The first thing that struck me at AfriCat was a large hanging map illustrating just how many farms surround the reserve. It’s little wonder that the animals stray onto farmland. The centre is full of similarly striking resources. In another section lies a collection of cans demonstrating the delicate balance of life on Earth.

Our guide, Martin, plucked the top can off the structure. “If humans disappear, the rest of life continues,” he said. He pointed to a lower can. “If, however, oryx and wildebeest disappear, so might the leopard and cheetah.” It was a simplification, but also an effective way to demonstrate to students our place in the chain and the damage we do to those beneath us.

Soon, we ventured out to find Electra, a free-roaming leopard tracked by AfriCat. Electra wears a collar so that researchers can analyse the movement patterns of big cats and warn farmers if one gets too close to a boundary. Enabling farmers to corral their livestock prevents them from killing a cat.

We observed a wonderful display of Electra’s son coming over to play (and she reacting rather moodily). It was clear that Okonjima Nature Reserve is one of the world’s best places to see leopards and cheetahs. Of course, direct interaction is strictly forbidden and observers must watch from afar. Nonetheless, the experience is nothing short of magical.

Afterwards, we ventured off to find Peanut and Raisin, two cheetahs sadly not classified as wild. A farmer killed the cheetahs’ mother and kept them until they were a year old. He called AfriCat when he felt he could rear them no more.

In time − through educating students and farmers − AfriCat hopes that rescuing carnivores will no longer be part of its remit; that perhaps people will break the cycle themselves. Until then, it will continue its efforts to conserve one of the biggest and most beautiful big cat populations on Earth.

That evening, as we watched a majestic sunset over the Acacia thornveld, we decided once and for all: Namibia is one of the most special places either of us have ever seen.

What: Tracking leopards and cheetahs at Okonjima Nature Reserve in Namibia as part of a Wild Dog Safaris 17-day self-drive safari.

Where: Accommodation on the tour includes 16 nights in a range of hotels, lodges and safari camps including Okonjima Plains Camp.

When: The best time to visit Namibia is May-Oct during the dry season (winter). The shoulder seasons of May and November are good for cheaper accommodation with higher availability. Heavy rainfall can occur in November, although mainly in short, intense bursts.

How: We visited Okonjima Nature Reserve and AfriCat as part of our self-drive safari. Wild Dog Safaris book accommodation, provide a hire car and organise an itinerary for the trip. On arrival at Windhoek, we were met by Wild Dog Safaris who provided a detailed itinerary, driving instructions, maps and information.