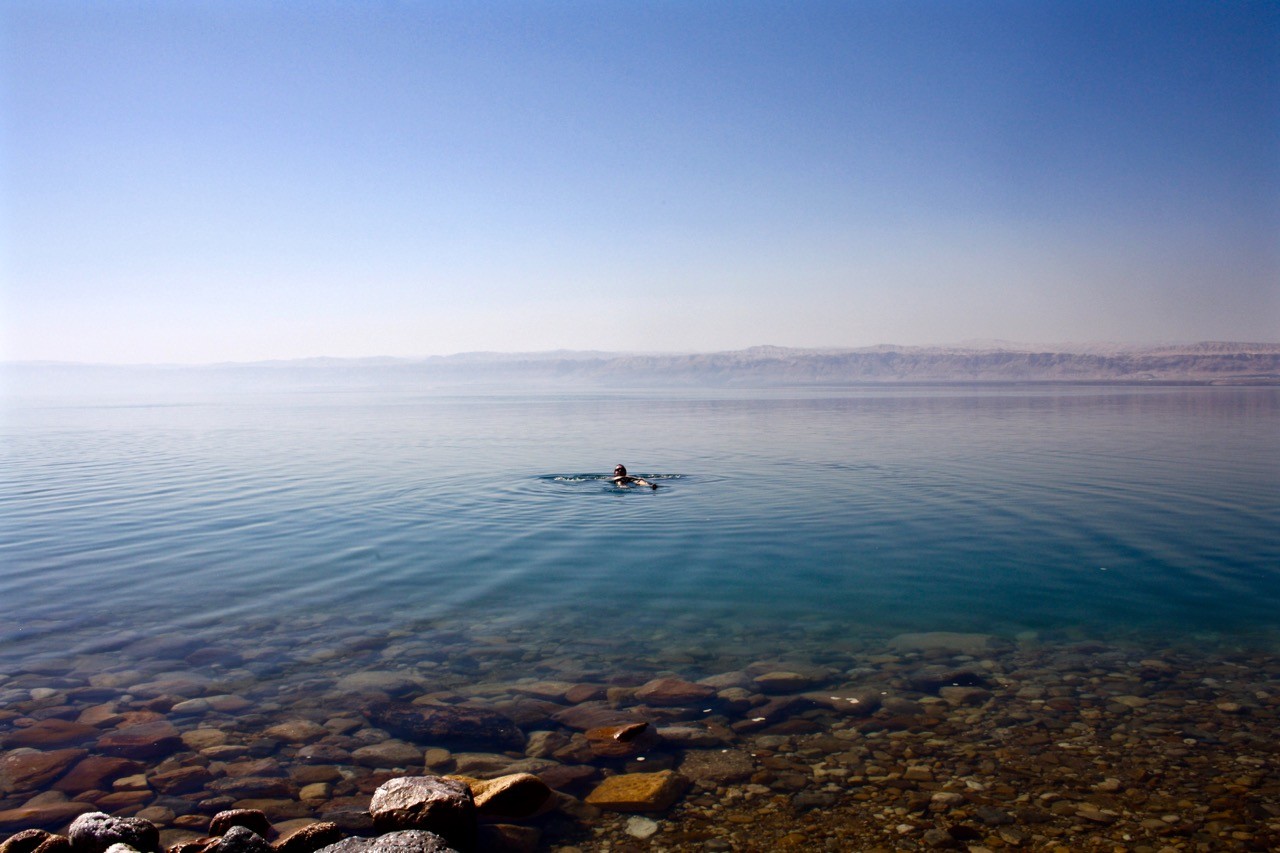 So, when the prospect of visiting the lowest point on Earth presented itself, Peter was predictably keen.

The Dead Sea lies 1,378ft (420m) beneath sea level and is known as the lowest point on Earth. Naturally, there are several candidates for the title depending on your definition:

Dry land suits me just fine, so I told Peter The Dead Sea was sufficient for the title. (He’d be on his way to the Mariana Trench if he had the means.)

We set off from Amman in Jordan and made the 60km (37mi) drive to the Dead Sea, a salt water lake in the Jordan Rift Valley. We were on commission for Asian Bride magazine so spent a couple of days in relative luxury at Mövenpick Resort & Spa, seconds from the shore of the Dead Sea.

The first thing that struck me was the utter calm and quiet. These may sound like tired adjectives but are actually traits backed by science. The Dead Sea has no outflow; instead, millions of litres of water evaporate every day leaving large quantities of salt on the beach creating a thick atmospheric haze which dampens sound to almost nothing.

The second most striking thing is the extreme salinity of the water. At 34%, the water in the lake is about 10 times as salty as the ocean. This kills off nearly all marine life – hence the ‘Dead Sea’ moniker. It should be said that this interesting factoid manifests as actual physical pain if you enter the water with an open or healing cut – as I found out when my knee began to sing in pain.

Swimming is near impossible given that the water has a density of 1.24kg/litre. Instead, visitors are encouraged to simply lie on their backs, float and relax. After all, you can’t drown in the Dead Sea!

We made the mistake of idling towards Jericho in Palestine’s West Bank. We ventured about 200ft (60m) away from shore before hearing a sharp whistle calling for our return. Uh oh. We turned around and swam back as quickly as the water would allow (pretty slowly).

We spent the afternoon (literally) wallowing in mud renowned for its therapeutic qualities. The mud at the Dead Sea is said to ease severe skin diseases and joint problems, and offers several beauty benefits too.

The mud also keeps off the swarms of houseflies drawn to the area by the natural fertiliser used by neighbouring farming companies. Be warned that the flies arrive in huge numbers and can be a constant nuisance so don’t dine outside during the day. Even sunbathing may prove a trial!

There have been efforts to curb this phenomenon, but the government has a bigger issue to address: the dying of the Dead Sea. Mineral extraction and the diversion of the River Jordan’s water have caused water levels to plummet. In 1930, the lake’s surface area was 1,050 sq km. Today, it is 600 and still falling. The water level has dropped by 40m and now falls by three metres a year.

At night, as you stand on the bank and gaze across to the lights of Jericho, it’s hard not to dwell on human failure – both in our treatment of nature and in our dealings with each other. The dying of the Dead Sea, this refuge of calm in a volatile region, would transcend mere loss and venture into tragedy. See it before it’s gone.

Lowest point on Earth: The Essentials

What: Visiting the Dead Sea, the lowest point on Earth.

Where: Dead Sea, Jordan. We stayed for two nights at the Mövenpick Resort & Spa Dead Sea which offered beautiful views, a luxurious spa and friendly service.

When: The best time to visit the Dead Sea is spring (March-May) when temperatures are warm but not scorching. In summer (June-Sept), temperatures have been known to reach 45°C (113°F).

How: From Amman, a taxi service can be booked for the day at 20 JOD (28 USD). Hotels charge 35 JOD (49 USD) for the service. Some local hotels and resorts also offer a shuttle service for a fee.

It’s worth noting that you only need a couple of nights at the Dead Sea. Some visitors choose to spend a week there to simply sunbathe and relax but this can prove difficult given the number of houseflies in the area!

Lonely Planet Jordan is a comprehensive guide to Jordan, ideal for those who want to both explore the tops sights and take the road less travelled.