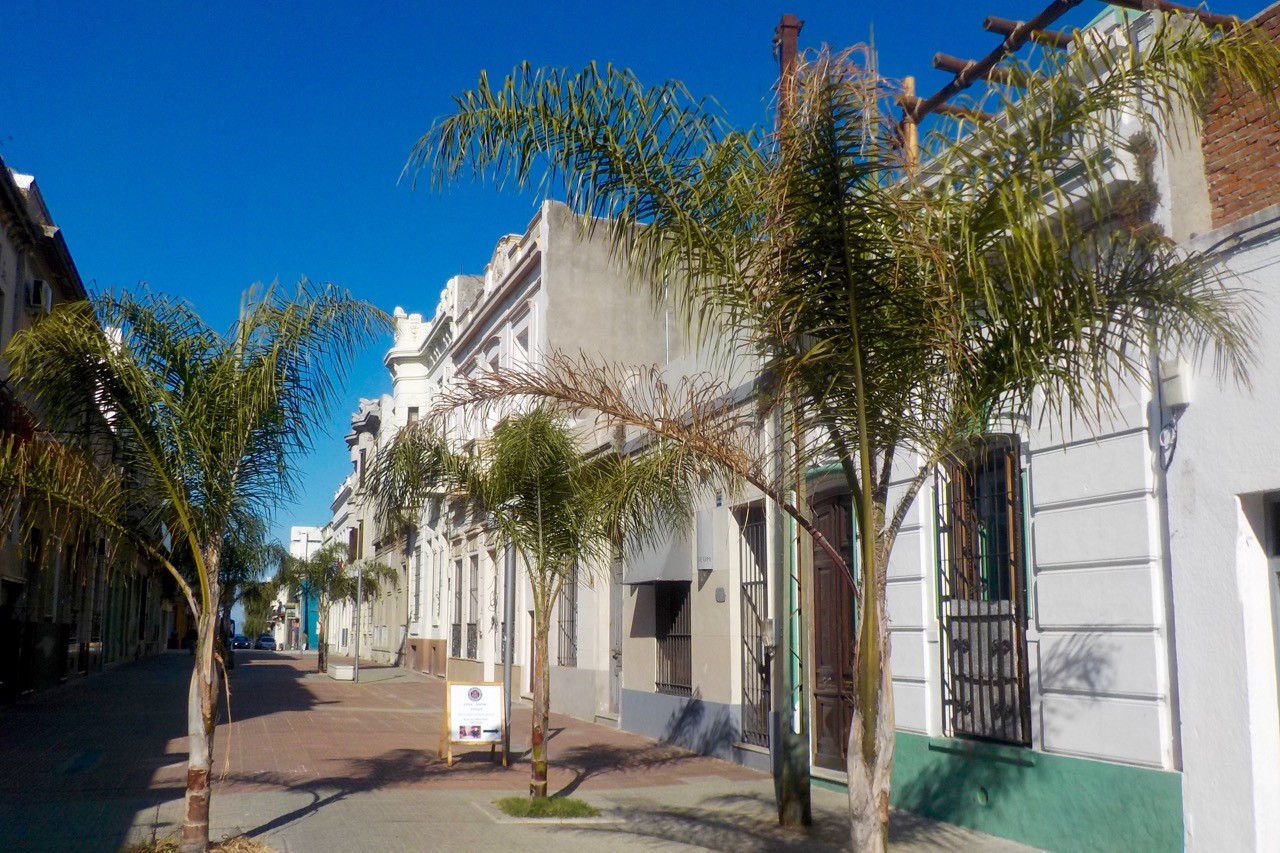 Even if your pockets aren’t deep, there are lots of things to do in Montevideo. Here are some of our favourites from our DIY walking tour of the city

With just two days and near-empty pockets we made the best of the situation and saw the city by way of a DIY walking tour.

Stretching 20km from east to west, the cosmopolitan city of Montevideo is home to nearly half of Uruguay’s population. Like other major international cities, Montevideo has a historic financial centre, bustling markets, a plethora of fine museums and an expanding expat community.

The city boasts a fine waterfront with clean beaches and flashes of the Latin-American vibe from across the water in Buenos Aires. The eclectic architecture comprises a mix of colonial buildings, tired skyscrapers and beachfront high-rises. You’ll also find a flourishing cultural scene with theatres, music venues and tango bars jostling for space in the city’s side streets.

Even if your pockets aren’t deep, there are lots of things to do in Montevideo. Here are some of our favourite.

Montevideo’s largest downtown plaza commemorates independence hero José Artigas with a 17m (55ft) statue. Beneath the plaza is the Mausoleo de Artigas where the remains of the national hero and “father of Uruguayan nationhood” lie. Many other notable and historic buildings surround the square.

The recently renovated Mercado Agricola de Montevideo is the city’s tourist trap but it is still worth a visit. The wrought-iron superstructure is far more impressive than the overpriced and bustling parrillas (steak restaurants), bars and food stalls inside. At the weekend, the place really comes alive with colourful street performers and musicians.

Located at the intersection of 18 de Julio Avenue and Plaza Independencia, the Palacio Salvo is the city’s most impressive building. When it opened in 1927 it was the continent’s tallest building at 95m (312ft) high. For the best view in town, visitors can take an elevator to the top of the palace for free.

This proposed World Heritage Site is an avenue stretching along the coast intersecting with many of the city’s large avenues and waterfront parks. It’s a great way to orientate yourself but do not underestimate its length – we walked for hours along the waterfront to reach the Playa de los Pocitos. You might consider renting a bike instead.

The popular and chic barrio and beach, Pocitos, is located on the banks of the Rio de la Plata and lies right on the Rambla. Backed by high-rise apartment buildings, the beach throngs in summer with sunbathers, swimmers and volleyball games, while the winter months are more for quiet strolls and dog walks.

Built in 1856, Uruguay’s oldest theatre, Teatro Solis, is also located on Plaza Independencia. The elegant building offers tours with English-speaking guides taking you behind the scenes with performers often dropping in to belt out the odd show tune.

Erected in in the heart of the Ciudad Vieja (Old Town), Palacio Taranco is located in front of Plaza Zabala. Built in the early 20th century the palace is now home to the Museum of Decorative Arts in Montevideo which houses collections of European and Persian textiles. The palace is still used as a meeting place by the Uruguayan government.

Joaquín Torres García is perhaps Uruguay’s most famous artist, despite spending most of his life abroad in France and Spain. García created curious portraits of historical icons such as Beethoven, Da Vinci and Dostoyevsky as well as cubist paintings similar to those of Picasso. The popular museum is spread over seven floors with the upper floors dedicated to educational workshops.

This is the city’s main Roman Catholic church and the seat of its archdiocese. The Metropolitan Cathedral dates back to the Spanish colonial era when a modest brick church was first built on the site in 1740. Inside the cathedral are tombs of several important figures from Uruguay’s history including soldiers who died during the unsuccessful British invasions of the River Plate between 1806 and 1807.

The Juan Manuel Blanes Municipal Museum of the Arts (Museo de Bellas Artes Juan Manuel Blanes) displays the best (and worst) of Uruguayan art ranging from the nation’s founding to the present day. Artists include its namesake, Juan Manuel Blanes, as well as works by Pedro Figari, Rafael Barradas, José Cúneo, and Carlos González. The museum is sited in a large park featuring a Japanese garden.

It’s easy to forget that the Uruguayans have won the football World Cup twice. They were the inaugural hosts and winners of the tournament in 1930 and won it again in 1950.

The Estadio Centenario was built in 1929 for the first World Cup and is listed by FIFA as one of the football world’s classic stadiums along with the likes of the Maracanã in Rio and Wembley in London.

The stadium houses the Museo de Futbol, dedicated to the history of Uruguayan football. The stadium is 4.5km from downtown and can be reached by buses 115 and 143.

Jutting out on the Punta Brava peninsula, the 21m-high (70ft) lighthouse and its 24km beam of light has guided ships off the coast of Montevideo since 1876. One of the more relaxed things to do in Montevideo is to take respite here among the pleasant grounds surrounding the lighthouse, enjoy a picnic and take in the sweeping views of the city’s coastline.

Things to do in Montevideo: The Essentials

What: Visiting the capital city of Montevideo in Uruguay.

Where: On the northeastern bank of the Río de la Plata, 180km east of Colonia del Sacramento and 160km from Buenos Aires, Argentina, by boat. We stayed at Hotel California, a mid-range hotel set a few blocks from the historic centre and main attractions.

When: The best time to visit Montevideo is during the summer (Dec-Mar) which is also the high season. This is the busiest time of year and prices can rise, especially at weekends, although finding a room is usually not a problem.

The next best options are the shoulder seasons (Apr-Jun and Oct-Nov). In the winter months (Jul-Sep) it can be downright chilly and some sights, shops and hotels may be closed.

How: BuqueBus provides the most comfortable and fastest ferry services across the Río de la Plata to and from Buenos Aires. The cheapest tickets can be found if you avoid travelling at the weekends or on Friday evenings. Travel times vary ranging from two to four hours depending on the time of day, type of journey and ticket class.

Colonia Express and Seacat also offer ferry crossings. One-way tickets start from around $40-60 USD. There is also a much cheaper bus/ferry combo offered by Colonia Express and BuqueBus which starts at $10 USD but can take up to five hours.

There is a much longer bus option available from Buenos Aires travelling north along the River Uruguay before finally heading east into Uruguay. Either the ferry or bus/ferry is the much smarter option.

There are several daily bus connections from Montevideo to Colonia del Sacramento along the coast. Although rarely necessary, it’s best to buy tickets at least a day beforehand to avoid disappointment. The journey takes 2.5 to 3.5 hours depending on stops and costs around $12 USD (UYU360 pesos).

The main bus station in Montevideo is the Tres Cruces terminal. It is on Avenida Bulevar Artigas a few blocks from the intersection with Avenida 18 de Julio. It is walking distance (30 minutes) from the city centre but if you have luggage it’s best to take a 10-minute taxi ride.

The efficient and traveller-friendly Carrasco International Airport is located 19 km (12 mi) from downtown Montevideo. A bus there takes 1 hour 15 minutes while a taxi will take 20 minutes. Book flights via skyscanner.net.

President Mujica has rejected the use of the presidential palace and chosen to stay in his house, a small farm on the outskirts of Montevideo. He donates 90% of his salary to different charities and is known as ‘the world’s poorest president’. Mujica: The wisdom of “the worlds most humble president” draws insight from his most memorable quotes.