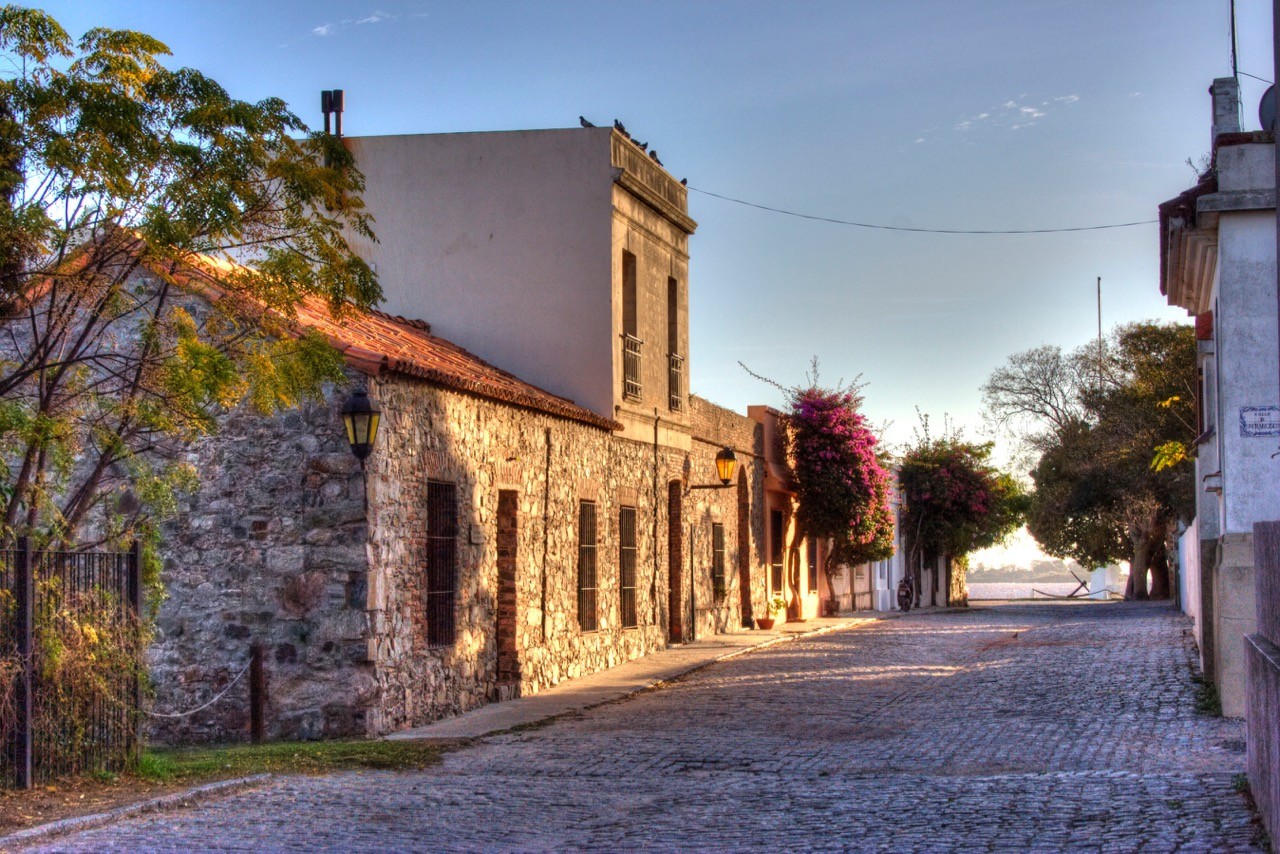 We earmarked Colonia del Sacramento in Uruguay as a place in which to stop and take a breather from our hectic travels. Much like our time in Tahiti in the South Pacific, we thought it would be an ideal place in which to pause for a few weeks and reset before continuing onto another chapter of our trip.

Unfortunately, by the time we reached Buenos Aires in Argentina – just 50km across the Río de la Plata – we were running desperately short on both funds and time. Therefore, what should have been an extended stay with some much-needed downtime turned into a brief stopover with little more than a whistle-stop tour of the major sights of the historic quarter (Barrio Histórico).

Nonetheless, what we saw in Colonia del Sacramento, we liked.

The Portuguese founded the small and charming settlement in 1680 in its strategic position on the north shore of the Río de la Plata opposite Buenos Aires. Over the next 150 years the region would change hands no fewer than 10 times, with rule swapping back and forth between Spain and Portugal. The region was captured, besieged and repeatedly attacked by the two colonial superpowers until 1822 when it was incorporated into the newly independent Brazil. Six years later when Uruguay declared independence, Colonia del Sacramento would finally find a lasting peace and elevate itself to a “ciudad“ (city status).

Inscribed in 1995 as a UNESCO World Heritage Site the well-preserved urban landscape is a popular tourist attraction for visitors from Buenos Aires and the rest of Uruguay. Despite this, the city remains a calm and intimate destination. There are plenty of hotels and restaurants catering for the crowds but the city has not swollen or lost its charm. Despite promotion to city status, Colonia’s population remains low at 27,000.

Unlike so many other colonial urban areas of the era, the historic quarter of Colonia del Sacramento does not conform to the rigid “checkerboard” grid imposed by Spain under the “Laws of the Indies”. Instead, irregular and winding cobbled streets make their way back from the calm riverfront towards sycamore-lined courtyards, the largest and liveliest of which is Plaza Mayor.

The quiet streets are filled with independent cafes, restaurants, galleries, museums, and craft and souvenir shops. As evening falls, the sound of live music begins to drift across the courtyards but this is not Cartagena in Colombia. The nightlife in Colonia is calm and unflustered; not the Latin-American vibe you may have come to expect across the water in Buenos Aires.

To explore all of the sights with ample time to do what the city encourages most – meander – you would ideally stay for a long weekend. However, if you’re short on time like we were, you will probably have to prioritise.

Some of the best preserved colonial buildings can be found at the Portón de Campo (city gate), the lighthouse and convent ruins, the stone Basilica of the Holy Sacrament, the Municipal Museum, the wharf and waterfront areas along with the picturesque Calle San Pedro.

However you choose to spend your time in Colonia del Sacramento, make sure you’re on the riverfront in time to catch the sunset.

What: Visiting the historic centre of Colonia del Sacramento in Uruguay.

Where: On the north shore of the Río de la Plata, 180km west of Montevideo and 50km from Buenos Aires, Argentina. We stayed at Hotel Romi, a mid-range hotel set a few blocks back from the historic centre.

When: The best time to visit Colonia del Sacramento is during summer (December to March). This is the busiest time of year, so prices are higher and finding a room can be difficult as thousands of visitors arrive from Buenos Aires. The next best options are the shoulder seasons (Apr-Jun and Oct-Nov). In the winter months (Jul-Sep) it can be downright chilly and some sights, shops and hotels may be closed.

How: BuqueBus provide the most comfortable and fastest ferry services across the Río de la Plata to and from Buenos Aires. The cheapest tickets can be found if you avoid travelling at the weekend or Friday evening. Travel times vary, ranging from one to three hours depending on the time of day and ticket class. Colonia Express and Seacat also offer ferry crossings. One-way tickets start from around $30-50 USD.

The ferry terminal in Colonia del Sacramento is a short walk up to the outskirts of town on the edge of the historic centre where most of the hotels are situated. Next to the ferry terminal is the bus station where buses to Montevideo can be easily found. There are several daily connections by bus from Colonia del Sacramento to Montevideo from a number of reputable companies. Although rarely necessary, it’s best to buy tickets at least a day beforehand to avoid disappointment. The journey takes 2.5 to 3.5 hours depending on stops and costs around $12 USD (UYU360 pesos).